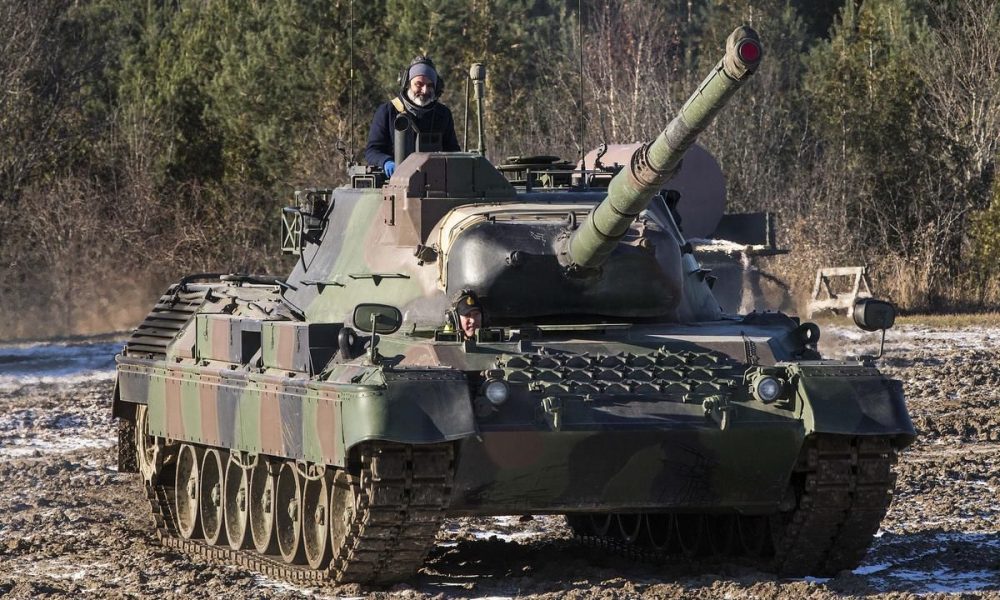 It is the coldest day of the year so far, and I am doing my best General Patton imitation as I stand on the commander’s chair of a tank, popping my head out of the turret as we patrol the frigid tundra of Oshawa.

Despite my best attempt at faking it as a “tough guy in the army,” it is clear I am a lot closer to Mash’s Radar O’Reilly than Rambo, as my hands feel frostbite setting in while I excitedly try to record a smartphone video on my ride in a Leopard 1A5 tank at the Ontario Regiment RCAC Museum.

I thought a childhood obsessed with G.I. Joe, countless hours playing shooter games on various video game consoles and an excellent knowledge of Hollywood action movies would prepare me for what would be a quick joy ride in an actual tank. I was dead wrong. It was way better than I could have imagined and an absolutely awesome thrill ride.

Jokingly described as “the best kept military secret in southwestern Ontario,” the Ontario Regiment RCAC Museum is also known colloquially as the “Tank Museum,” as it has the largest collection of operational historical military vehicles in North America, including two M4 Shermans, American M60s, the Soviet BMP1, German-built Leopard — which was designed by Porsche — and many more.

The museum hosts and organizes “Tank Weekends” and offers other experiences that let people take a spin in this behemoths.

Not far from the Oshawa Executive Airport, the museum has a small building with historical displays, replicas and information. It is when you walk out into the large warehouse space, called the Military Vehicle Conservation Centre, where it is really breathtaking as there are so many vehicles sandwiched in together, with so many tanks, armoured personnel carriers, vintage motorcycles and other vehicles.

“We have over 80 vehicles that are operational, and probably about 20 or 30 that are prime candidates to be restored,” says Matt Rutledge, operations manager, “We’ve got Canadian vehicles, British, Soviet, German and more.”

It’s not just tanks, as Rutledge points to a Chevrolet Radio van from the Second World War. “That was built in Oshawa by General Motors. Serial number 001, so it was the first one off the line of that particular vehicles type. This area really tells the story of World War II, which includes the local Oshawa General Motors story, but also of the British Commonwealth in general.”

Rutledge is one of two full-time employees at the museum, but there are more than 140 volunteers who help repair and maintain the vehicles. Although keeping them running is no easy task. The majority of the tanks work on diesel, and while most do not run in the winter, as salt and the elements cause more wear and tear — the museum is much more active in the spring and summer — they all have to be turned on and made sure they are functioning.

“Listen, it is fun to drive these things, although it’s not easy,” says Rich Bennett, who is in charge of maintenance of the vehicles at the museum. “But the real reason I do this is because you are literally working on a pieces of living history.”

In terms of finding parts, it is an accredited Canadian Armed Forces Museum, so they can get CAF parts from the service, but it’s not so simple for international vehicles.

“There lots of parts in Europe, because obviously lots of stuff was shipped during the war,” Bennett says. “But if we can’t find a part, we mill it or make it. We’ve got a whole machine shop in the back, with lathes, mills, presses and all that stuff, so we take a piece of metal and recreate it.”

Bennett is my chauffeur today, and leads me through the process of climbing up and getting into the Leopard. He says when it gets moving it will sort of feel like being on a boat, as I will sway side to side, and the tank’s treads mean I will feel just about every piece of terrain. Half my body pokes out the top of the tank, as I am standing on the commander’s chair for most of the ride, surveying the horizon as the tanks motors along.

Later on, Bennett takes me through the tank innards, explaining the positions of the crew, and while he jokes he’s over six feet tall, and this tank is one he finds roomy, it still feels cramped and claustrophobic. If you need another reminder of how useless a tank crew member I’d be, and how small the space is, while climbing in I almost sprained my ankle while getting caught on some wires. Then I had a back spasm while I was just sitting in the commander’s chair as Bennett explained how the crew would load ammunition.

Despite that, I was giddy during the entire ride and tank tour.

While tanks are definitely not known for their use in espionage, it is surprising just how under the radar this institution is. Rutledge says military-philes and fans are fully aware of it, as are tank enthusiasts who play the online game World of Tanks, as every year that game holds contests and tournaments with prizes including being able to have a ride and operate the main turret. As well, if there has been a TV show or movie shot in Ontario and Eastern Canada that needs a tank, it has come from this museum and is either shot here or loaded up and sent to the set. On the day we visit, scenes for a CBC web series called Mindfudge are set to be shot.

“People don’t know it’s here. It is really Durham region’s hidden gem. We’re working to get the promotion out there in the local media, but 70 per cent of our visitors are from outside the Toronto area,” explains Rutledge.

“For example, for one of the big weekends, we had people fly in from Croatia, Australia, Italy, South Africa. They are tank enthusiasts, so they look to travel to the meccas for these vehicles.”

It’s worth it just to go and check out the vehicles, but if you want a ride the museum hosts tank weekends throughout the year, with the next one taking place Feb. 9, where they offer $20 rides in the M548 “Battle Bus” and $50 rides in the M113 Tracked Armoured Personal Carrier.

The biggest weekend of the year is going to be held on June 8-9, called the Aquino Tank Weekend, which is considered Canada’s largest military show of the year. It is named for a battle in the Second World War where 13 Canadian tanks were lost, but none of their crews died. This weekend brings in thousands of people from all over the world, and there are several staged military battles.

Raju Mudhar is a Toronto-based reporter covering popular culture at the Star. Follow him on Twitter: @rajumudhar