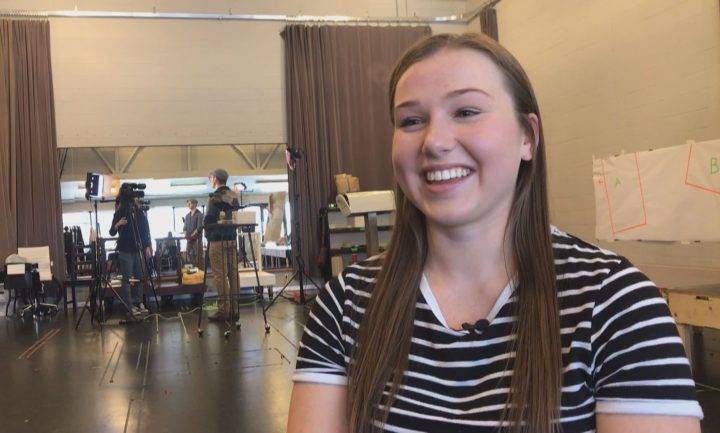 Calgary actor Katie McMillan was just trying to get through the end of her final semester of high school when an opportunity to perform in a Theatre Calgary production was brought to her attention by an acting teacher.

“I had no idea what it was and I just submitted [the application] online,” said McMillan.

She got the audition, but the 18-year-old admitted she “had no clue” she would be trying out for a part in the world debut of Mary and Max – A New Musical — a play co-created by New York-based duo Bobby Cronin, composer and lyricist, and Crystal Skillman, theatre bookwriter.

“I went in for the ensemble part and they asked me to look young,” McMillan said. The actor said she was told she could be considered for the much bigger role of “young Mary,” the musical’s female lead.

“I was not expecting to get it all,” she said.

After casting Broadway performer and California native, Lauren Elder, as the adult version of Mary, Cronin and Skillman searched across Canada and the U.S. for her younger counterpart. The leading lady they’d been looking for was in Calgary all along.

“There was just something about her energy and her glow that reminded me of the character and of Lauren.”

And then he heard McMillan belt it out.

“As she sang, tears streamed down my face,” Cronin said.

He recalled turning to Stafford Arima, artistic director at Theatre Calgary, and saying, “It’s her. I don’t need to see anyone else.”

Calgary actor Katie McMillan, 18, will make her Theatre Calgary debut in the world premiere of “Mary and Max – A New Musical” later this month.

McMillan was equally moved and has been enjoying the unexpected thrill of working with some of the industry’s best since rehearsals began nearly four months ago.

“I went in really excited just to perform in front of them, so having it go the way it did was very unexpected,” McMillan said. “It was incredible.”

McMillan shares a few traits with her character.

Mary and Max – A New Musical tells the tale of 10-year-old Mary from Melbourne who becomes pen pals with Max, a 44-year-old New Yorker who has Asperger’s Syndrome.

The production chronicles their friendship over the span of 20 years and how it influences Mary’s life choices. The story deals with serious subject matters like bullying and loneliness but also uses humour to show how each character helps the other grow.