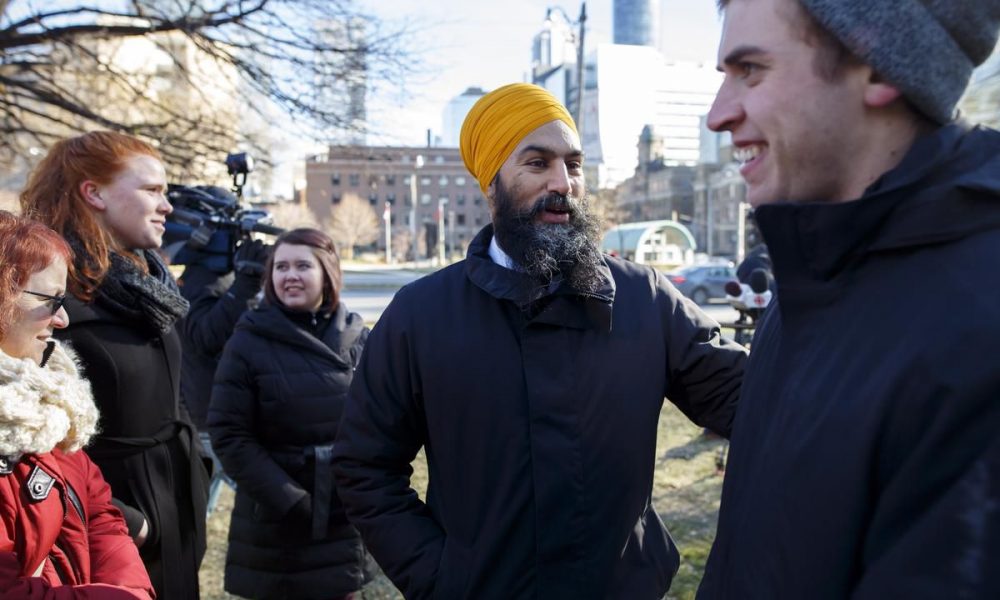 OTTAWA—The leader of the New Democratic Party is talking about fear and insecurity.

Not his own, mind you; nor that of his party. Perched on a couch in his Parliament Hill office, Jagmeet Singh is in his usual high spirits, his ebullience by now a well-known characteristic.

It’s almost enough to mask the starkness of his talking points. Singh is making the case that, behind the rosy economic statistics held aloft by Justin Trudeau and the Liberal government, “real people, real Canadians” are struggling.

Look at the General Motors shutdown in Oshawa, he says. Hundreds laid off in Cape Breton. Workers protesting wage cuts at the Montreal airport. On the cusp of an election year, “this insecurity, this fear” pervades Trudeau’s Canada, Singh says. People are worried about precarious work, the cost of living, the looming scourge of climate change — and the NDP is here to assuage that fear.

“The reality is that, for everyday people, things aren’t going well,” Singh told the Star early one evening in December.

“Our mission is to make sure we stand up for those people who don’t feel like there is anyone in their corner.”

Singh might know something about being on the ropes.

More than a year since his dominant campaign to clinch the federal NDP leadership, Singh has had — by his own acknowledgement — some “political ups and downs.” Fundraising has tanked since the days when the New Democrats were the official opposition in Ottawa. A parade of sitting MPs have decided to sit out the 2019 federal election, including veterans from the NDP’s front bench (though Singh points out at least one former parliamentarian is vying for a comeback, Toronto’s Andrew Cash). Through it all, Singh has been forced to quell controversies like the furor last spring over his attendance at Sikh separatist events and allegations of inappropriate behaviour against two of his MPs.

Now Singh is looking to turn the page on all that in the new year, when the NDP leader has not one, but two all-important elections on the calendar.

First, at some point in February, Singh will get his chance to enter the House of Commons for the first time. The former Ontario MPP from Brampton has never held a federal seat. But in his search for a vacancy, the NDP leader decided in August to relocate to British Columbia so he can run in Burnaby South, a riding that was held by New Democrat Kennedy Stewart until he resigned to run — successfully — for the Vancouver mayoralty.

If all goes well for Singh in Burnaby — and one poll conducted this fall suggested the riding is by no means a lock for him — Singh will then turn to the larger battle: the general election slated for October.

Farouk Karim, a former NDP press secretary who campaigned with Quebec MP Guy Caron in the 2017 NDP leadership race, said there’s no doubt Singh and his party are in a slump. The party was roundly defeated in each of the eight byelections held since Singh became leader, posting a lower share of the total votes in each contest compared to the general election in 2015.

Singh himself has foregone a salary from the NDP while the party has struggled to fundraise. Donations have dropped to less than $5 million in 2017 from $18.6 million in 2015, according to filings with Elections Canada. Quarterly reports so far in 2018 don’t look any better.

Meanwhile, the party’s standing in national polls has stalled in third place, well behind the Liberals and Conservatives and not that far ahead of Elizabeth May and the Green party.

The challenge for the NDP, Karim said, is to make the case to voters on the progressive side of the spectrum that Trudeau’s Liberal government has failed to deliver on their priorities. That might be hard, given that the Liberals are still governing on their first mandate from voters. Voting for change is like trying to convince a family to buy a new household appliance after only a few years, he said.

“It’s easier to make the case that there are ‘manufacturing defects,’” Karim said.

Karim hears this when Singh attacks the Liberals for nationalizing the Trans Mountain Pipeline, a $4.5-billion purchase that the NDP contends will undermine Canada’s commitment to cut greenhouse gas emissions under the Paris Agreement. The party is also rolling out new rhetoric about how the NDP is “on your side,” a message that Karim said is meant to highlight the party’s traditional association with unions’ and workers’ rights, versus the Liberal government that passed legislation to force striking Canada Post employees back to work.

At the same time, some have argued the political field has shifted with the prevalence of populist nationalism in Europe and the United States. Frank Graves, president of the EKOS Research Associates, said the same forces that draw people to anti-elitist rhetoric from the likes of Donald Trump could be a major factor in Canada’s 2019 election.

That could present another opportunity for the NDP, if it can position itself as the champion of those who feel left out of wider economic success by pursuing policies such as more aggressive taxation of the rich, Graves said.

Indeed, Singh has already unveiled a suite of proposals to close tax loopholes for corporate leaders and stop the rich from hiding their money, but left-wing critics such as Avi Lewis — co-author of the environmental and social democratic treatise, the Leap Manifesto — are calling on him to sharpen his demands with attention-grabbing proposals like “free transit for all.”

“One of the answers could be to tap this populist vein,” said Graves. “(Singh) could definitely be a magnet for people who find it thrilling to hear these things spoken in a more direct way.”

Political strategies aside, Singh’s first hurdle is the February byelection in Burnaby South. For Karim, victory there is the only way to spark a brighter 2019 for the social democratic party — or put Singh’s leadership in question.

“People are counting out the NDP, so there is a lot of room to surprise people in 2019,” he said.