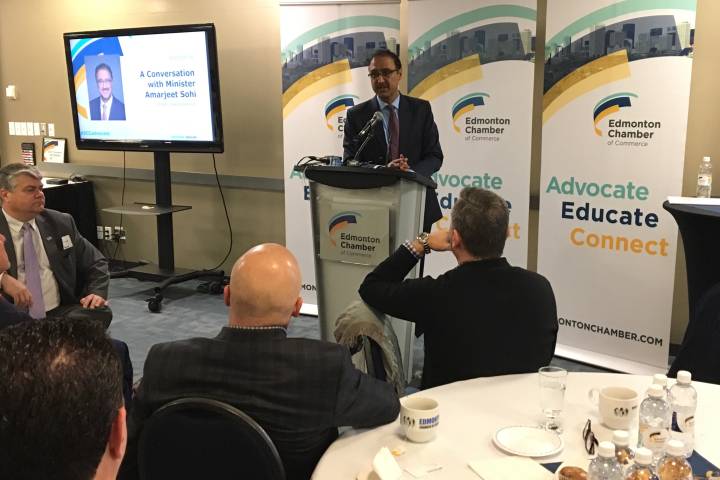 Federal Natural Resources Minister Amarjeet Sohi told a business audience Friday morning that he has asked the National Energy Board to report back on how much oil is flowing through Canada’s pipelines. He wants to find out if they can handle more capacity.

“That’s a question that I’m raising with the NEB and I’m hoping that they’ll be able to provide me with an answer as quickly as possible,” Sohi later told reporters.

“Is there room for us to ship more oil through pipelines that already exist? And is there a way to optimize that capacity?”

The potential increase in pipeline capacity would coincide with the ability to send more oil by rail. Sohi reported that moving oil by rail has increased this year to where 270,000 barrels per day are being transported. His hope is to gain more capacity through both means.

He made the remarks inside the World Trade Centre to the Edmonton Chamber of Commerce, while outside on Jasper Avenue, protesters were chanting: “Pipelines now” and “Build that pipe,” as they urged for completion of the Trans Mountain pipeline. They were also protesting against Bill C-69, which looks at how projects are regulated.

Sohi said he sympathizes with those who are out of work.

“What I would say to the people out there, showing their support for the energy sector is, we agree with them.

Sohi took pointed questions from the audience, who didn’t agree with the government’s actions that include a tanker ban in Northern B.C. waters, the importation of Saudi oil to the Irving refinery in New Brunswick, and the cancellation of the Northern Gateway and Energy East pipelines. They see over-regulation hampering the industry.

Sohi pointed out that the Enbridge Line-3 pipeline will be up and running next year, originating in Hardisty, Alta.

He also said he’s met with more than 40 First Nation leaders, listening to their concerns on the environment. Sohi insists rushing through the process is the mistake that started this mess, and that mistake won’t be made again.

Chamber President Janet Riopel said there is clear frustration that we’re seeing a lot of talk and no action.

“We need to understand keenly why we don’t see more movement in this pipeline construction. I mean Canadians are losing out.”

Sohi told reporters the review of the NEB on the impact of tanker traffic will be concluded by the end of February.

Answers to his question on pipeline capacity he hopes will be back to him as soon as possible.