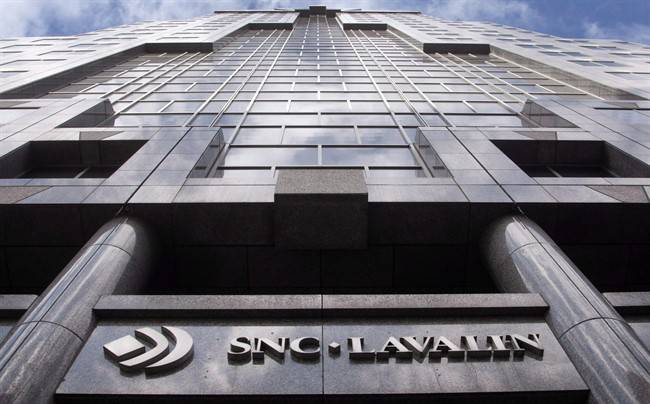 SNC-Lavalin Group Inc. shares plunged to their lowest level in years on Wednesday after it announced that federal prosecutors won’t agree to negotiate a deal that would set aside unproven fraud and corruption charges in return for fines, co-operation and other reparations.

The Montreal-based engineering and construction company’s shares were down more than 14 per cent, trading at about $44.20 on the Toronto Stock Exchange shortly after 1 p.m. The stock hasn’t closed below $45 since early 2016.

The drop came after federal prosecutors declined to “invite” the company to negotiate an remediation agreement, also known as a deferred prosecution agreement or reparation agreement, using a new provision of the criminal code.

“The criminal code defines the criteria for reparations agreements; the (prosecutor’s office) determined that the criteria were not met,” the Public Prosecution Service of Canada said in a brief email without elaborating.

SNC said it continues to defend itself against all charges and is reviewing its option to appeal the decision.

CanaccordGenuity analyst Yuri Lynk wrote that he was surprised that the prosecutors hadn’t agreed to negotiate with SNC, saying its management had expressed great optimism a deal would be possible.

“With a settlement seemingly taken off the table for the time being, the focus shifts to the court case,” Lynk wrote in a research note to clients.

“Should SNC be found guilty, it could be debarred from bidding on Canadian federal work. However, we view this outcome as unlikely, noting (1) SNC has a strong case and (2) we think it is unlikely the government would allow a company employing thousands of people in Canada to fail because of the transgressions of a handful of people.”

SNC and two of its subsidiaries were charged in February 2015 following an RCMP investigation into their dealings in Libya.

A preliminary inquiry of the case against SNC-Lavalin — a process that determines whether there’s grounds for a full trial — was rescheduled last month in order for the new legal provision to be activated.

SNC said it remains committed to negotiating an agreement with federal prosecutors in the interest of its employees, partners, clients, investors, pensioners and other stakeholders.

“The company believes that the legislation should be utilized to its intent with regards these innocent stakeholders,” the company said in a statement.

SNC says it has made many changes — including changing key personnel and establishing rigorous policies — since 2012, when the company became embroiled in a series of scandals involving several former executives.

The charges stem from allegations that SNC-Lavalin paid nearly $48 million to public officials in Libya between 2001 and 2011 to influence government decisions.

The RCMP has also charged the company, its construction division and a subsidiary with one charge each of fraud and corruption for allegedly defrauding various Libyan organizations of roughly $130 million.

The charges followed police investigations into the activities of several individuals — some of them senior SNC executives — in Canada and several other countries.

Earlier this year, the company settled two civil suits over allegations of misleading investors about its activities in Libya. The company said it would pay $88 million and insurance payments would bring the total settlement to $110 million.