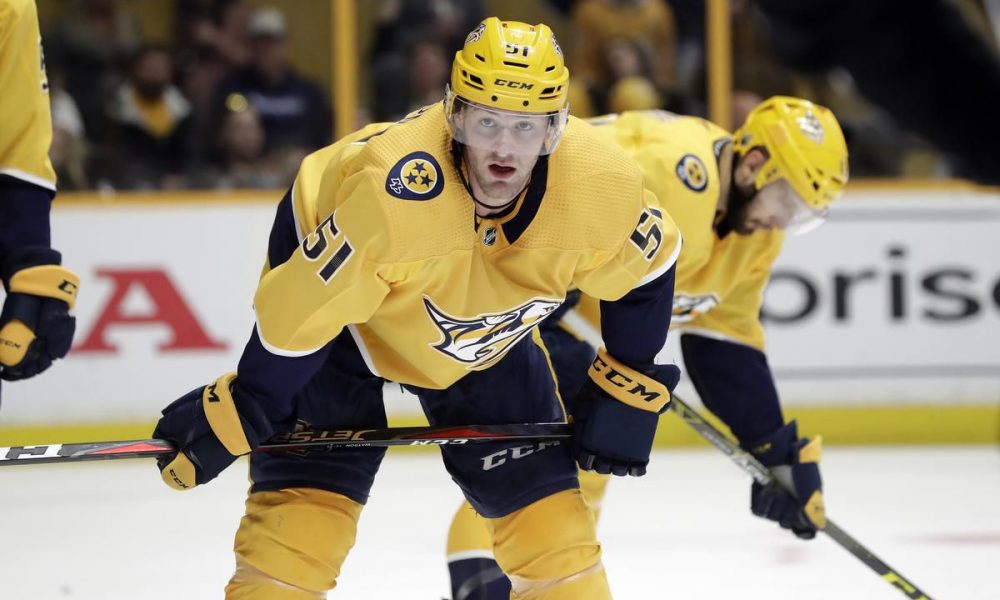 After the outrage, a stunned silence.

No admission that maybe, sometimes, the instant assumptions are wrong. Or wrong-ish.

A professional athlete, in this case, accused of domestic violence against his girlfriend. A league, the NHL, lambasted for a punishment — reduced from 27-game suspension to 18 by an arbitrator on appeal — perceived as a limp response.

Unlike Major League Baseball, the NHL has no formal domestic violence policy, with every alleged incident decided on a case-by-case basis.

Criticism of the NHL — and there was plenty of it, from a whole lot of folks with a media pulpit — was further fuelled when it was learned that the arbitrator who’d ruled “soft” on Nashville Predator forward Austin Watson had been fired by MLB in 2012, three months after overturning Ryan Braun’s 50-game suspension for using performance-enhancing drugs. Shyam Das had been the league’s longest-tenured arbitrator.

So there was Watson, on the ice at Bridgestone Arena in full uniform last week, for pre-game ceremonies before the team’s home opener against Calgary, although he didn’t play and will not be eligible to play until Nov. 15. His inclusion did not go over well. The suspension adjustment had been jointly announced by the NHL Players’ Association the previous day.

NHL commissioner Gary Bettman had called Watson’s behaviour “unacceptable” when he handed down the original suspension a month ago. And the league was clearly unhappy about the trim. “The NHL remains committed to do what we believe is right,” the league said in a statement. “And, in this regard, we intend to continue our steadfast efforts to ensure everyone in our League is adequately educated and sensitized to the importance of this serious social issue. We will not hesitate to adhere to and enforce — through firm discipline as necessary — the standards of professional conduct we feel are appropriate for our League.’’

But there was a sting in the tail of this particular story.

On Saturday, Watson’s girlfriend, Jenn Guardino, released a statement of her own in which she took blame for the incident that had occurred at a Nashville gas station in June. A witness had reported Watson “pushing” Guardino to police. Officers noted the woman had red marks on her chest. Watson acknowledged he’d shoved his girlfriend, was charged, and pleaded no contest to domestic assault on July 24. The legal definition of “no contest” — nolo contendere literally means “I do not wish to contend’’ — is an alternative plea to guilty or innocent whereby the defendant neither disputes or admits to the crime.

“The incident that took place on June 16 … was not an act of domestic violence,” wrote Guardino. “Austin Watson has never and would never hit or abuse me.’’

She was the one who had been intoxicated at the time, Guardino asserted.

“I have struggled with alcoholism for many years,” said Guardino, adding that she is actively involved with Alcoholics Anonymous. “I am fortunate to have Austin’s continued support with my treatment. We handled matters poorly on June 16 and know that we need to make better decisions going forward.

“I take full responsibility for my actions on that day. I would like to sincerely apologize to everyone involved for the negative attention that followed this incident, including the Nashville Predators community and the city of Nashville.”

Many of those most familiar with domestic violence would read an unspoken subtext into Guardino’s statement. Victims often assume blame even when they’re not remotely blameworthy. There are a myriad of reasons for this: shame, pressure, a wish to absolve the perpetrator, an overriding desire to keep the family intact. Fear. Love.

I fundamentally disagree with the stark Believe Survivors credo. There must always be some corroboration and a weighing of credibility, whether in court or a quasi-judicial forum. Every accused is entitled to the presumption of innocence until proven otherwise beyond a reasonable doubt. But if you do subscribe to a Believe mantra, then so must Guardino be accepted at her word.

Public education about domestic violence, undeniably a social blight, has been immensely effective. It has taken far too long for partner-upon-partner assault to be recognized as harmful, not just to the individuals involved and children who witness it but to broader society as well.

But crime and punishment are not solely about denunciation. A just system gives equal consideration to rehabilitation and reform. This is especially important in damaged, fractured families where there is a mutual willingness to heal together.

These days the braying mob has little patience for that. Nor is there much tolerance for nuance, interpersonal dynamics, context and where a minor assault falls on the continuum of violence. It is easier — certainly the approved messaging — to come down hard on offenders with one-size-fits-all revulsion. The courts, quite properly, don’t do that, though, which is why Roberto Osuna gets a $500 peace bond and admits nothing but MLB imposes a 75-game suspension and the loss of $2.54 million (U.S.) in salary (and traded by the Blue Jays). For God’s sake, drunk drivers who kill aren’t held to that kind of financial account.

Watson will forfeit $241,000 of his $1.1 million salary. His league resolution also includes 26 weeks of a “batterer intervention” course, despite his girlfriend’s assertion that he’s never physically raised a hand against her.

Professional sports leagues may genuinely believe they are doing the right thing. And, of course, professional sports are not democratic institutions. It’s a privilege to play, not a right. Owners set the rules, with or without collective bargaining accord.

I don’t think sports leagues or individual franchises are competent to make these decisions. Internal investigations, privately adjudged — details of the alleged infraction often never revealed or held up to public prosecutorial scrutiny (unless there’s a parallel criminal investigation) — are an intrinsic contradiction of due process and fairness.

But that doesn’t matter when there’s a righteous cause to champion.

It won’t matter either, what Jenn Guardino has to say. Austin Watson will forevermore be the hockey player who hit his girlfriend, mother of their baby. The virtue of accusation becomes the fact.

Even if he isn’t.