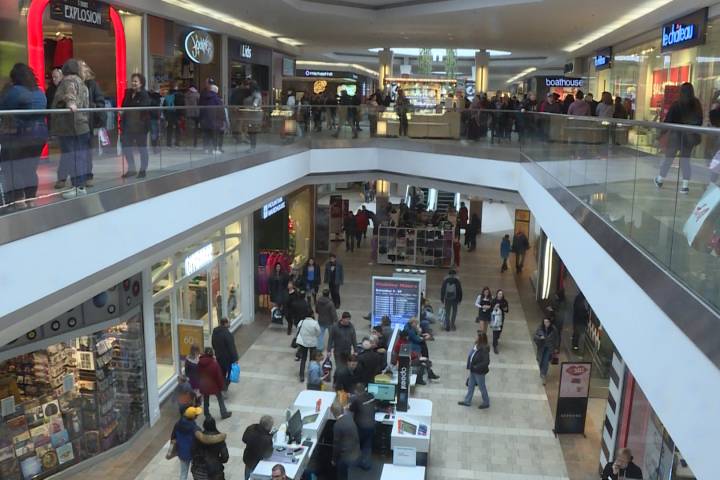 Big crowds of shoppers were seen at the Cataraqui Centre in Kingston Wednesday, making the most of Boxing Day.

Global News spoke to some retailers at the mall today to see how they were doing.

“It was extremely busy,” said Ashra Davis, an associate at Lush. “We had a line outside the store this morning before we opened.”

While there were no lineups outside of Foot Locker, it was still busier than usual, says sales associate Zac Wilson.

“It’s been busy since we opened,” Wilson said. “Steadily crowded the whole day.”


READ MORE:
Vancouver Boxing Day shoppers line up early for sales, but did they find deals?

Some retailers felts that the Cataraqui Centre saw more crowds this Boxing Day due to its newly-added stores.  This year, the mall brought in additional stores, including Indigo, Marshalls, Dollarama and Urban Planet.

According to many shoppers, better deals can be found online rather than in store.  For that reason, Global News asked shoppers in Kingston why they were braving the crowds and chaos on Boxing Day.

“I do not shop online because often their return policy is such that you have to pay for shipping and you can’t actually see the merchandise that you’re shopping for” said Sharon Johns, who was shopping with her daughter at the Cataraqui Centre.

Eric Mettson was at the mall with his family and Global News caught him while he and his son were waiting for their mom to finish shopping.  Mettson says he’d rather shop “in stores because you can see and touch the stuff that you’re buying.”

Tayla Armstrong, meanwhile, was at the mall with her friends. “[It’s] just more fun to get out and go shopping,” she said, explaining why she chooses the mall over online.

According to a recent study by Environics Analytics, the average Canadian household spends close to $3,000 per year on online shopping.

“I think that the people that shop online and shop in stores are two very different people,” said Ryan Head, manager of a Wow Mobile Kiosk. “People [are] maybe shopping online more, but people that want the personalized, customized advice, they’re going to come in store and see us.”

Davis from Lush, meanwhile, feels that “we tend to sell out online faster, but it’s better if you come into the store to experience the product.”

Whatever they chose to do, Kingstonians made sure to get the hits this Boxing Day.