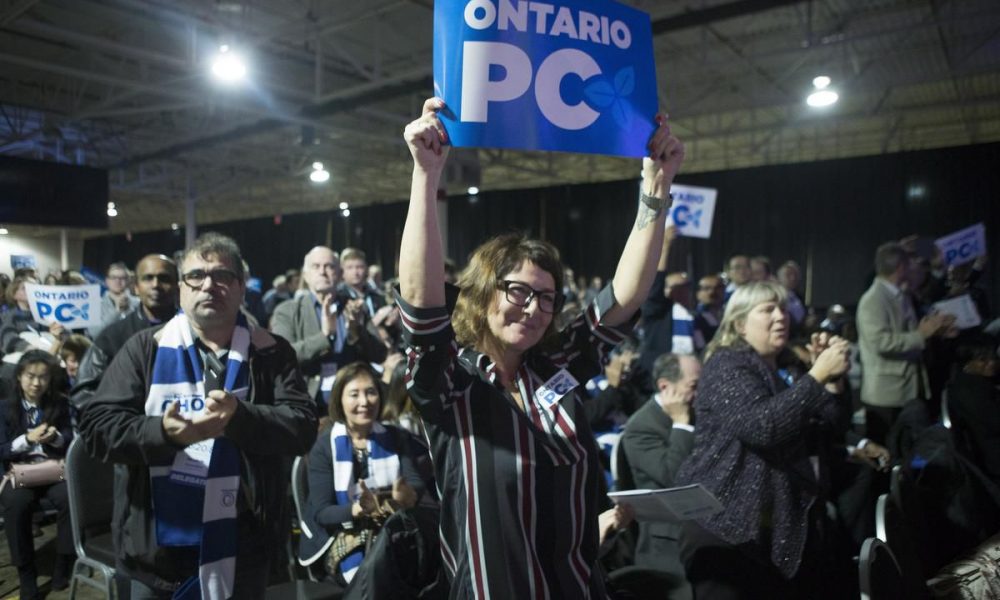 A veteran party organizer who enjoyed Premier Doug Ford’s support won the presidency of the Progressive Conservatives on Sunday, defeating a grassroots activist who made his name battling former leader Patrick Brown.

A majority of party delegates cast ballots for Brian Patterson at a weekend convention in Etobicoke, where members from across Ontario celebrated the PC victory in the wake of more recent sex scandals and controversial cuts in the government’s fall economic statement.

Patterson has worked with every leader dating to former premier Bill Davis in the early 1980s, played key roles in the governments of Mike Harris and Ernie Eves, then helped rebuild the party after its 2003 drubbing by Dalton McGuinty’s Liberals.

“I look forward to working with each of you to keep our party strong and ready to win again in 2022!” Ford said on Twitter, congratulating Patterson and the new party executive.

Patterson, who avoids the limelight and was elected to a two-year volunteer term, could not be reached for comment.

Instrumental in exposing problems in Tory candidate nomination votes under Brown and in fighting the former leader’s promise of a carbon tax, Karahalios campaigned on bringing “a higher standard of integrity” to the party.

Karahalios did not return a request for comment but former party president Ken Zeise tweeted “Jim’s take no prisoners, scorched earth campaign triggered an endorsement of his opponent by @fordnation.”

The convention, which attracted more than 1,000 delegates to the Toronto Congress Centre on Dixon Rd., was rife with federal overtones as Conservatives took aim at Prime Minister Justin Trudeau’s carbon pricing plan to fight climate change.

With a national election looming next fall, guest speaker federal Conservative Leader Andrew Scheer charged that the prime minister is treating car-driving commuters as the “enemy” while Ford told loyalists “I will not sit by and let Justin Trudeau make life more expensive for Ontario seniors and families.”

Trudeau fired back on another front, taking aim at Ford’s moves to cut Ontario’s French-languages services commissioner and to scrap plans for a francophone university in the province, which the PCs had backed in the June election campaign.

“I was deeply disappointed by the decision of the Ontario government to cut services and protections for the francophone minorities in Ontario,” said the prime minister, suggesting the issue will have ramifications beyond the province’s borders.

New Quebec Premier François Legault said he will raise the issue when he meets with Ford at Queen’s Park on Monday. The cuts have been widely criticized in Quebec — a crucial battleground for the Conservatives in next fall’s election — as an assault on minority language rights.

While Scheer did not flag the francophone issue publicly at the convention, his office issued a statement saying he raised “concerns” in private with Ford and Attorney General Caroline Mulroney, minister responsible for francophone affairs.

Ford told the convention Saturday night that the government is facing a $14.5-billion dollar deficit and must cut costs, in addition to $3.2 billion in spending axed so far, to balance the budget.

“We’re not going to go in there slashing and burning,” he maintained. “We’re going to do it responsibly. We will balance. It may be in year four, but we’re going to balance.”

Finance Minister Vic Fedeli’s economic update on Thursday did not specify a timeline to eliminate the deficit.

Her resolution, which now will be debated at next year’s policy convention, calls on the party to recognize gender identity as a “Liberal ideology” that should be excluded from the curriculum.

“It was a disgusting and dangerous display of hate” aimed at transgender people, said New Democrat MPP Marit Stiles (Davenport). “I think that folks want a government that will work to make Ontario free from discrimination and hate — not one that feeds it.”