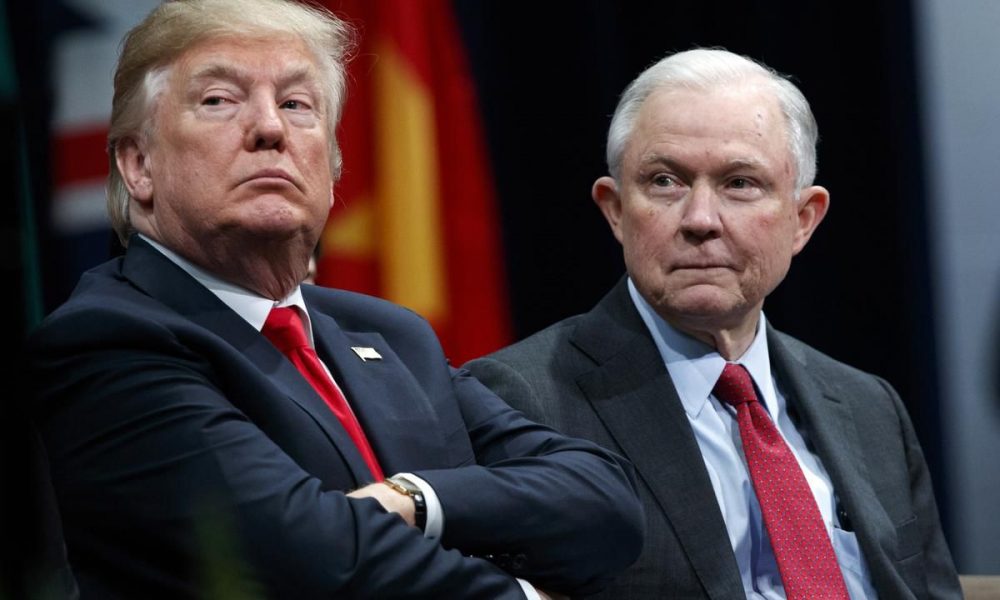 WASHINGTON – U.S. President Donald Trump has ousted Attorney General Jeff Sessions, a move that makes it easier for him to possibly fire the special counsel investigating his campaign’s relationship with Russia.

Sessions submitted his resignation on Wednesday, the day after the midterm elections in which Trump’s party lost the House of Representatives. He told Trump he was resigning “at your request,” making clear he was effectively fired.

He will be replaced, at least temporarily, by his chief of staff, Republican lawyer Matthew Whitaker — a former Republican political candidate who has publicly called for the special counsel probe to be limited.

Subscribe to the Star to support our reporting on U.S. political news — and what it means for Canada.

Whitaker wrote an article for CNN last year in which he argued that special counsel Robert Mueller’s investigation was on the verge of going too far, by delving into Trump’s finances, and that Mueller should be ordered to curtail his work. And he mused on television about slashing Mueller’s budget to a level “so low that his investigation grinds to almost a halt.”

Trump had been furious with Sessions for recusing himself from the Russia investigation last March, a move that eventually led to the appointment of Mueller. Trump had blasted Sessions, the nation’s top law enforcement officer, in an unprecedented months-long series of angry tweets, public statements and private rants.

Sessions, a right-wing former Alabama senator and federal prosecutor, was the first sitting member of the Senate to endorse Trump. Formerly on the political fringe, he used his job as head of the Department of Justice to turn their shared hard-line views on immigration and criminal justice into policy.

He was widely seen as one of Trump’s most effective appointees. But Trump was fixated on the recusal decision, which he blamed for the Mueller investigation he calls a “witch hunt.”

“I have never seen anything so Rigged in my life. Our A.G. is scared stiff and Missing in Action,” Trump wrote on Twitter in August of the investigation, one of numerous public complaints over the last year.

Because Sessions had recused himself, authority over the Mueller investigation had fallen to Deputy Attorney General Rod Rosenstein. Until now, Rosenstein would have had to be the one to execute the firing of Mueller. But Rosenstein had expressed hostility to the idea.

Now, Trump can theoretically have Whitaker do the firing for him — though a federal regulation says the attorney general needs a good cause: “misconduct, dereliction of duty, incapacity, conflict of interest,” or “other good cause, including violation of departmental policies.”

Firing Mueller would likely cause the biggest firestorm of Trump’s presidency, producing a democratic crisis that would increase the chances that Trump could eventually be impeached. Trump has fumed about Mueller’s investigation but has not publicly said he wants to fire him.

At a press conference on Wednesday, he said that he did not want to fire Mueller but that he thought he had the power to do so any time he wants.

Democrats will take control of House committees in January thanks to their victory in the midterms, which will give them new powers to conduct oversight of the administration. The incoming chairman of the House Judiciary Committee, Democratic Rep. Jerry Nadler, said on Twitter: “Americans must have answers immediately as to the reasoning behind @realDonaldTrump removing Jeff Sessions from @TheJusticeDept. Why is the President making this change and who has authority over Special Counsel Mueller’s investigation? We will be holding people accountable.”

Trump had made no secret of his desire to oust Sessions. In an Oval Office meeting in May 2017, he berated Sessions so forcefully over the recusal that Sessions wrote a letter of resignation, according to multiple news reports and former Trump chief of staff Reince Priebus.

Priebus claimed he convinced Trump not to accept the resignation — and that, the next month, he talked Trump a second time out of forcing Sessions into a resignation.

Trump settled for taunting Sessions on Twitter, showing no interest in the tradition of attorney general independence.

“Why aren’t Dem crimes under investigation? Ask Jeff Sessions!” he wrote in February.

In December, Trump compared Sessions unfavourably with Obama attorney general Eric Holder, suggesting to the New York Times that Sessions was insufficiently “loyal” to him. “I don’t want to get into loyalty, but I will tell you that, I will say this: Holder protected President Obama. Totally protected him,” Trump said.

Sessions had dismayed employees of the Justice Department and many others by saying almost nothing as Trump impugned the department’s integrity. He issued a rare statement in response to Trump’s “DISGRACEFUL” tweet in February.

“As long as I am the attorney general, I will continue to discharge my duties with integrity and honour, and this department will continue to do its work in a fair and impartial manner according to the law and Constitution,” he said.

Sessions was ousted eight months after he fulfilled Trump’s desire for him to fire FBI deputy director Andrew McCabe. Some observers thought his decision might convince Trump to spare his own job.

Sessions had made a major mark on American criminal justice. An opponent of a growing bipartisan push toward the liberalization of justice policy, he reversed a series of Obama-era efforts that sought to reform policing and prosecution practices.

Sessions told federal prosecutors to seek the harshest possible sentences for drug offences, reversing the Obama-era guidance that favoured more leniency for non-violent crimes. He had the Justice Department pull back from their Obama-era push to compel rights-violating local police forces to change their practices. He rescinded an Obama-era directive that sought to reduce the use of private prisons. And he rescinded another Obama-era directive that told the federal government to take a hands-off approach to states that have legalized marijuana.

Sessions has also been a key player in Trump’s immigration crackdown. He recommended and announced the cancellation of Obama’s Deferred Action for Childhood Arrivals (DACA) program, which protected from deportation young immigrants brought illegally to the U.S. as children. And he aggressively fought the “sanctuary cities” that do not fully co-operate with federal immigration authorities, in March announcing a federal lawsuit against California over state sanctuary policies — which he described as the work of “radical extremists.”