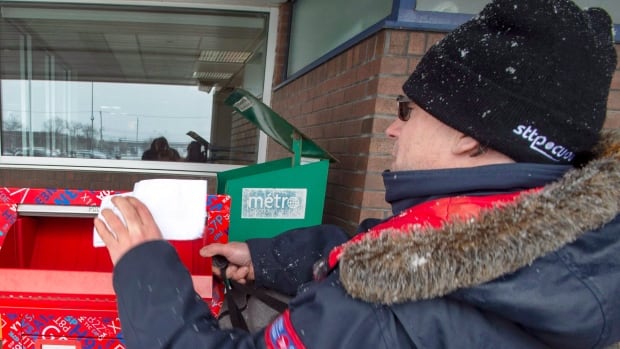 Postal workers in Canada are delivering parcels seven days a week to ensure they will be in time for the holidays, says Canada Post’s largest union.

Mike Palecek, national president of the Canadian Union of Postal Workers (CUPW), said in an email on Monday that union members are working every day of the week following weeks of rotating strikes across the country. The union was legislated back to work on Nov. 27.

Palecek said the union cannot confirm a claim made by Canada Post in a statement on Saturday that the company has a backlog of six million parcels. Canada Post has said it cannot guarantee packages will be delivered in time for the holidays because of the backlog.

« If a six-million parcel backlog exists, it has nothing to do with CUPW rotating strikes, and sounds more like poor planning from Canada Post to deliver the holidays, » he said.

In a statement on its website on Monday, the union said federal Labour Minister Patty Hajdu has appointed Elizabeth MacPherson as mediator-arbitrator in the dispute. The government indicated in legislation that it would do so.

« Your negotiating committee did everything possible to avoid this legislation, » the union said.

« However, because of the legislation, we will work with the mediator-arbitrator to attempt to negotiate good collective agreements and avoid arbitration. We believe in our right to free collective bargaining but we will reluctantly participate in this legislated process. » 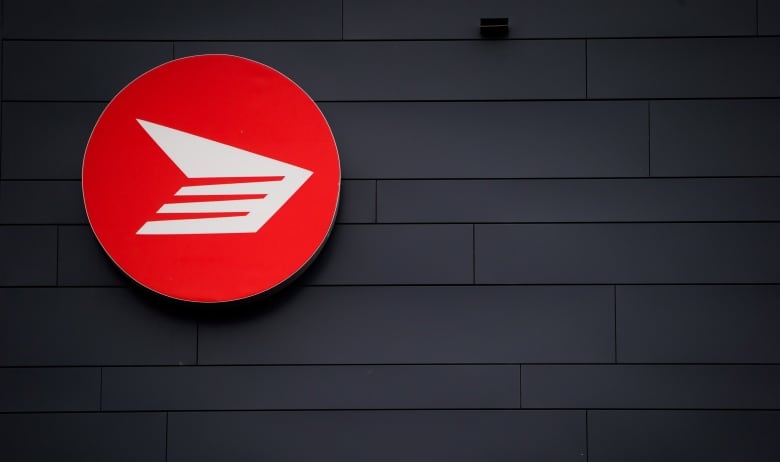 The Canada Post logo is seen on the outside a processing centre. Two weeks after the federal government legislated an end to rotating strikes by Canada Post employees, it has appointed a mediator-arbitrator to bring an end to the labour dispute. (Darryl Dyck/Canadian Press)

Palecek said CUPW negotiators are still at a downtown hotel in Ottawa, where they have been since July, to work out collective agreements for their members.

He said Canada Post negotiators have left the premises.

« Canada Post moved out of the hotel over the weekend, giving us the impression that they have given up on collective bargaining and will simply wait for the arbitrator-mediator to impose agreements on our members, » he said.

« CUPW remains fully committed to achieving negotiated settlements that ensure the health and safety of our members and equality for all workers. »

Since the strikes officially ended, protests have taken place outside some Canada Post facilities. Palecek said the pickets have been organized by other unions in support of postal workers.

« CUPW has not organized any pickets. Our members are back at work. We do not know when or where our allies may demonstrate solidarity with postal workers being legislated back to work, » he said.

On Saturday, Canada Post said in a statement that the backlogged parcels are in postal yards and off-site locations across the country.

« Our employees are doing excellent work, but backlogs and heavy incoming volumes of parcels and continued illegal picketing is impacting our ability to keep up, » the corporation said.

« Our inventory is almost three times the level it was last year, with only three weeks until Christmas. »

It said parcel deliveries are continuing but will be delayed during the holiday season and into January.

Canada Post said there are delays of up to several weeks for parcels arriving from other countries, with the delays expected to diminish throughout December, and there may be « modest delays » for some parcels leaving Canada for other countries.

As for letter mail, the corporation said the backlog should be cleared and deliveries made in time for Christmas.

According to CUPW, the union wants better pay and job security, guaranteed hours for its 8,000 rural and suburban carriers, and equality for those workers with the corporation’s 42,000 urban employees. It also wants Canada Post to adopt rules that would address workplace injuries. 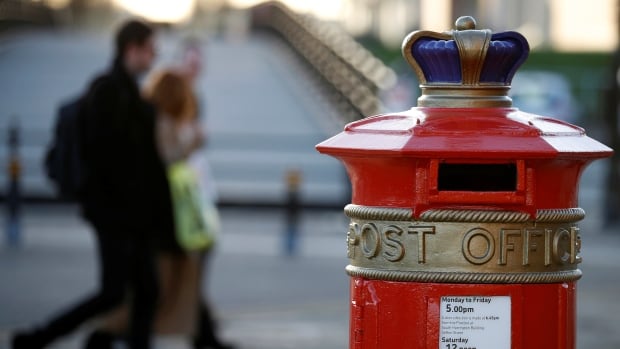 Prime Minister Justin Trudeau’s government gave one final push Friday to bring the Canada Post labour dispute to a close, suggesting it will act quickly if rotating strikes continue beyond a Saturday midnight deadline for the latest contract offers from the Crown corporation.

Trudeau said last week that « all options will be on the table » to end postal disruptions if there was no progress in bargaining for new contracts.

Decisions on how to end job actions by postal workers could come as early as Sunday, said a government source, who spoke on condition of anonymity, adding that « ‘all the options’ does include legislating. »

The prospect of bridging the impasse all but collapsed Friday when the Canadian Union of Postal Workers said it would not bring the latest offers to a vote of its members, although it said both sides remained at the bargaining table.

« CUPW members voted overwhelmingly in favour of taking strike action if necessary to achieve our demands at the bargaining table, » the union’s national president Mike Palecek said in a statement. « We are fulfilling the mandate given to us by our members. A vote will take place when Canada Post presents offers that meet our demands for health and safety, gender equality and more full-time jobs. »

At the same time, Canada Post has asked its international partners to halt mail and parcel shipments to Canada as it reels under a 30-day delivery backlog resulting from a labour dispute with its employees.

The Crown corporation said Friday that its domestic customers are also backed up with packages waiting for delivery as rotating strikes that began Oct. 22 continue across the country.

« The backlogs are also extending to international mail and parcels entering the country, » Canada Post spokesman Jon Hamilton said in an email.

« As a result, we have been forced to request that international posts, including the United States Postal Service, refrain from shipping items until we can clear the backlog. »

The request covers all 190 countries in the Universal Postal Union (UPU), the United Nations agency that represents global postal services and oversees co-operation among them.

In an interview with CBC News, Hamilton said the backlog is a record for Canada Post with 600 trailers filling distribution centre yards, each containing an average of 2,500 parcels.

Normally about one million parcels arrive in Canada each day, and the next three weeks are the busiest of the year.

The halt doesn’t affect mail leaving Canada, but like domestic mail, it will be subject to delays resulting from the rotating strikes, a spokesperson for Canada Post said in an email to CBC News. 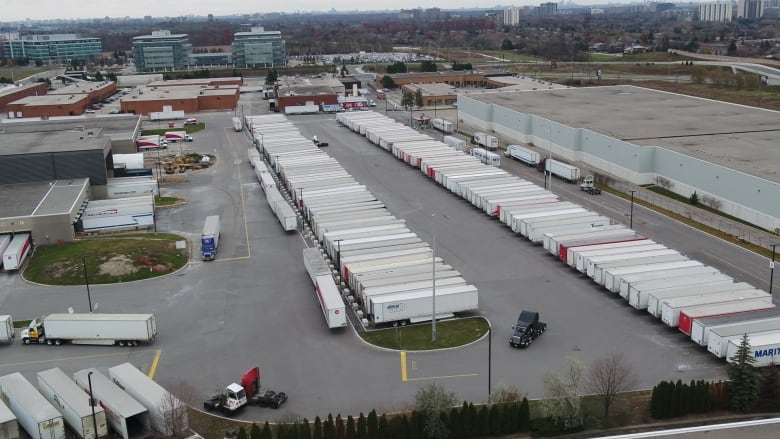 In this photo provided by Canada Post, trucks full of undelivered parcels stand at a distribution hub in Mississauga, Ont., on Friday. (Canada Post)

Britain’s Royal Mail, in a bulletin to its corporate customers, said it would hold any shipments bound for Canada within the last couple of days in its distribution centres « awaiting further updates. »

« As a result of ongoing industrial action, we have now been requested to suspend the dispatching of international traffic destined for Canada, from today until further notice, » it said.

« This applies not only to us, but all international postal operators, » the Royal Mail added.

A similar bulletin was issued by Hongkong Post, and online sales giant eBay said it received a notification from China Post that it was halting deliveries.

Canada Post and the Canadian Union of Postal Workers have been in contract negotiations for nearly a year, with no success.

CUPW began rotating strikes across the country that have shut down postal operations in over 200 communities, hoping to pressure Canada Post into agreeing to contract demands, including better job security, reduced workloads and stronger health and safety measures.

The walkouts have resulted in backlogs at the agency’s main sorting plants, particularly in Toronto where Hamilton said the number of mail-filled tractor-trailers awaiting processing had reached 407 as of Friday. Dozens of trailers were also sitting idle in Montreal and Vancouver.

The Crown corporation issued new contract offers this week aimed at reaching agreements with its approximately 42,000 urban employees and 8,000 rural and suburban carriers.

CUPW said the latest proposals made positive steps, but not enough to put an end to walkouts, which rotated Friday through most of Manitoba, as well as communities in Ontario, B.C., Alberta and New Brunswick.

The offers were time-sensitive, with Canada Post imposing a deadline of Saturday at one minute before midnight for acceptance.

CUPW wouldn’t say whether tentative deals could be reached by then, but said the union would not be held to an arbitrary deadline.

There is no reason to halt international shipments. Let us solve our issues at the bargaining table.— Mike Palecek, CUPW president

Palecek was also critical of Canada Post for halting shipments from outside Canada.

« There is no reason to halt international shipments, » he said in a statement. « Let us solve our issues at the bargaining table. »

The union said it wants concrete proposals for dealing with an escalating number of work injuries at Canada Post.

Hamilton said the corporation has proposed a way for the company and union to work together to identify ways to make the workplace safer, and offered to fast-track a review of workloads to reduce overburdening of carriers, who have seen a rapid increase in the number of parcels they have to deliver while letter volumes have declined.

Prime Minister Justin Trudeau warned last week his government will act to end the rotating strikes if there is no significant progress in the negotiations. Trudeau did not specify what type of action might be taken, nor did he provide a timeline.

Earlier this week, eBay called on Trudeau to legislate an end to the dispute in time for Black Friday and Cyber Monday sales events tied to American Thanksgiving that begin Nov. 23.

With files from the CBC’s Jeannie Lee.