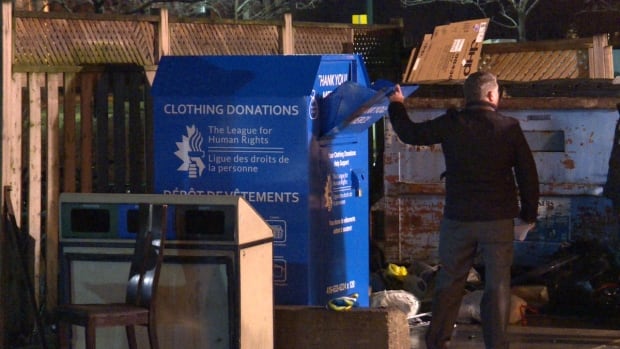 A woman found partially inside a west-end clothing donation bin and without vital signs was pronounced dead early Tuesday morning.

Emergency crews were called around 1:30 a.m. ET to the Dovercourt Road-Bloor Street area after receiving reports that a woman was inside the bin.

Paramedics performed CPR on her, but she was pronounced dead at the scene, Toronto EMS told CBC Toronto.

The circumstances surrounding the incident do not appear suspicious and the death is likely accidental, police told CBC video producer Tony Smyth at the scene.

Last week, The Canadian Press reported at least seven Canadians have died after getting stuck in clothing donation bins, leading one advocate in B.C. to call them « death traps. »

Late last month, a 34-year-old man died in a West Vancouver donation bin, while a 32-year-old man was found dead inside a bin in Cambridge, Ont., last November.

The bins’ hatches are designed to prevent theft of donations. But they can also trap someone leaning in too far.

The spate of deaths has led some to call for the bins to be redesigned or removed.

Loretta Sundstrom, whose 45-year-old daughter died in 2015 after getting stuck in a bin, told CBC’s World Report last week that she cried at news of the man’s death in West Vancouver. She said something must be done about the bins’ safety risk.

In the wake of the man’s death, West Vancouver closed all of its bins. 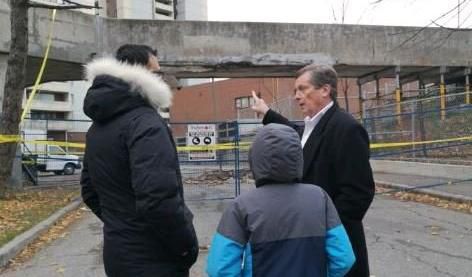 Parts of a pedestrian bridge that connects an East York condo to an elementary school collapsed early Saturday morning, leaving a hole in the middle of the walkway.

Toronto Fire Services got a call at 6:22 a.m. about concrete that had fallen from the underside of the bridge. When they arrived, there was a hole in the bridge, which stands 5 metres off the ground.

The bridge is commonly used by students to get to Crescent Town Elementary School, but there were no injuries reported. “We will be advising parents that the bridge is not accessible until further notice,” Ryan Bird, Toronto District School Board spokesperson, said in an email.

The bridge is owned by both the TDSB and Pinedale Properties, the owner of the condo. Bird said Pinedale’s portion of the bridge was the section that collapsed and that the TDSB has secured it’s own side of the bridge.

Toronto Fire noticed there had been reinforcements placed on the bridge, indicating work had been previously done on the infrastructure.

Mayor John Tory visited the school later in the day, tweeting that it was a “miracle” it happened when no one was crossing the bridge to go to school.

“I will be making inquiries of (TDSB and Pinedale) as to how the bridge got into this state including a review of repairs done in the past year,” he tweeted. “I will also be asking questions about inspections done on this bridge (and) others like it.”