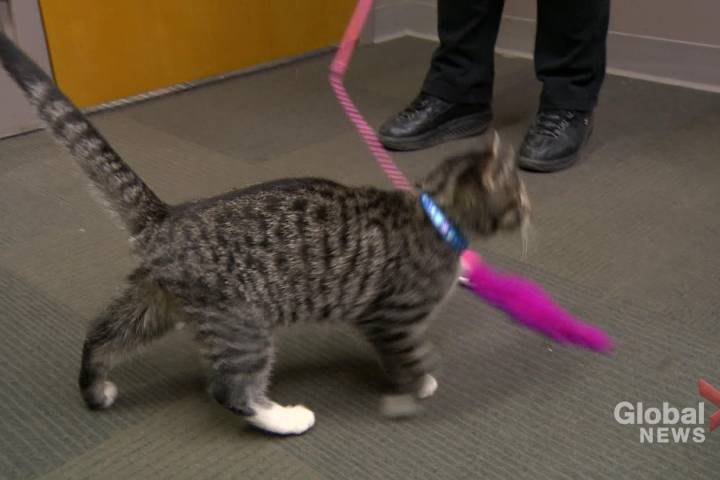 Cuddly kittens and precious pups had all eyes on them on Saturday.

The sixth annual Cause for Paws Telethon, in support of Saskatoon SPCA, took over Shaw TV to raise funds for the SPCA in hopes of providing animals with healthy homes.

“What we are seeing right now, though, is a growing population of homeless animals. The population is up about 50 per cent in terms of running at large in our city over the last five years, “said Patricia Cameron, executive director of Saskatoon SPCA.

“Lots of cats in particular, so we are urging [residents] to spay and neuter, and if you adopt from us, your pet comes spayed and neutered and ready to become part of your home and community.”

“In addition to raising a lot of money, we have also brought a lot of people and animals together over the years,” said Simon Hiatt, co-host producer of Cause for Paws Telethon.

“We have heard so many success stories that people have seen the animal on television with us, or segments with Global. It’s just such a great partnership with the SPCA and the media.”

Not only will the donations help provide homes and medical care for 4,000 animals, but the telethon has also inspired an 11-year-old girl to give back.

“I started a charity called Paws ‘n Claws Food Fund, and I used my birthday money this year to start it up and keep it going,” said Kelsie MacDougald.

“My first run I went to Dollarama and bought some pet food and some toys. I take all that stuff I buy to the SPCA, and then, of course, I have to pet every cat and visit every dog.”

With the help of the community, the SPCA hopes to find loving and caring homes for all the animals.