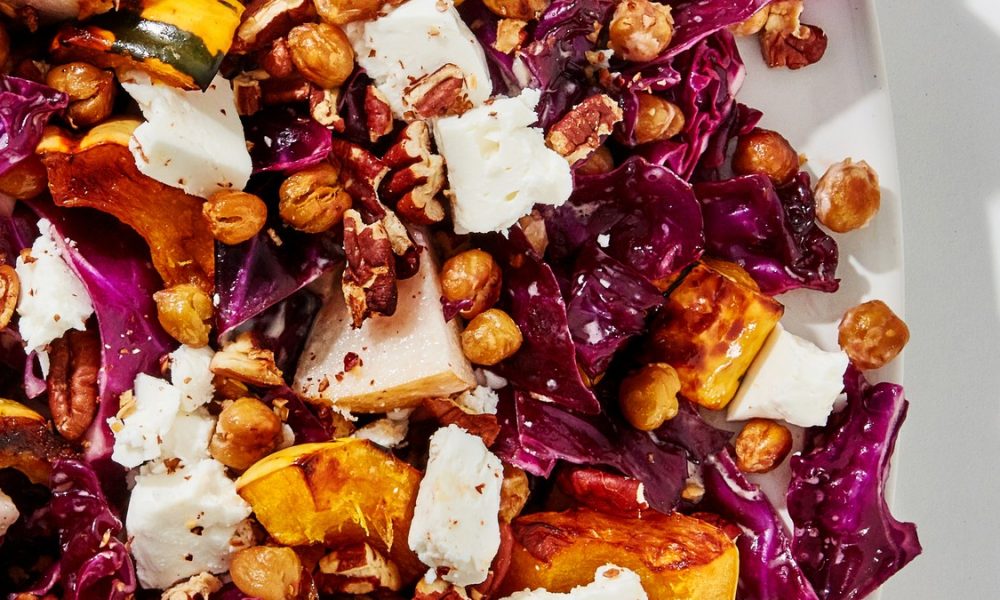 I love salad. Big fluffy green ones. Crunchy ones. Hearty ones. Every salad have a special place in my heart. If I’m being honest, I’ve been caught on many occasions making a midnight snack out of a head of lettuce and some leftover dressing, a time when any normal person would be munching on shredded cheese from the bag or jarred salsa and chips. (I’m just living my truth people!) But the hard reality is that most people don’t share this feeling with me—and it’s my mission in life to change their minds. And that starts with the dinner salad.

I get that a lot of folks are resistant to the idea of eating salad—and only salad—for dinner. But as a person who almost always has friends staying over at my place, and am therefore responsible for keeping them fed, I’ve had plenty of practice converting salad skeptics. Through much trial and error, I’ve come up with a formula for a dinner salad that will satisfy both my salad hater friends and my salad obsessed self. It produces a pile of veggies that is substantial, satisfying, and a main course in and of itself—no post-meal snacking required. Here’s how to do it.

A substantial base is the key to a proper dinner salad. This is no place for boxed « spring mix » or a head of delicate butter lettuce—you need something with some oomph. I love to use cabbage (red, green, savoy, napa), kale, collards, or mustard greens, which will be able to stand up to all the flavorful add-ins, toppings, and dressings that this salad wants without wilting. The trick to making these non-lettuce salad bases delicious is to massage them with some olive oil, lemon juice and salt after they’ve been cut up. This helps to break down the tough cell structure these veggies have, rendering them tender and ready to soak up flavor.

A dinner salad needs protein to make it really feel like dinner. Anything goes! Shredded rotisserie chicken. Last night’s roasted salmon. Jammy boiled eggs. But nobody’s saying you have to use leftovers—you can sizzle up a steak or a pork chop just for this salad endeavor if you want to make it feel less hodge-podge. And do not despair, vegans of the world: Crumbled tofu, frozen-then-thawed edamame, or crispy chickpeas are all welcome here, too.

Now that you’ve got a sturdy base and some protein in the mix, it’s time to incorporate some supplementary cooked and/or raw veggies. Again, this could be repurposed leftovers—roasted squash from a few nights ago, stir-fried broccoli—or some odds and ends from meal prep, like quick-pickled cukes or shaved radishes. You want to shoot for contrast, if at all possible—soft, sweet roasted carrots paired with crunchy raw cauliflower, for instance, or tender herbs and sprouts with steamed chunks of sweet potato. And don’t forget about fruit! Slivers of tart-sweet apple or Asian pear can bring both acidity and a bit of welcome sweetness to the party.

This is not the time for light vinaigrettes and the like—you want a dressing that packs a punch, something that has a little heft to it. Remember: Because you started with hearty greens instead of delicate lettuces, this salad can handle it. Think yogurt-based dressings, a rich tahini sauce, or a garlicky homemade ranch. If you are inclined towards something closer to a classic vinaigrette, consider adding a bit of extra citrus, a healthy spoonful of Dijon mustard, or a bunch of chopped herbs, all of which will give it the extra something-something this salad wants.

Starting to look like a pretty great salad, huh? Hearty base, protein, extra veg, a knockout dressing. Only one thing stands between you and the best salad you’ll eat all year: TOPPINGS! Don’t. Skip. This. Step! Toppings are what makes a dinner salad the crunchy-salty-creamy-craveable meal it should be. The more the merrier, but as a rule, I like to make sure to have something crunchy (think pita chips, fried shallots, croutons, nuts, seeds) and something cheesy (crumbled feta, grated Parm, nuggets of goat cheese) to really take that salad to the next level. Toppings are like the icing on a cake, or the star on the top of a Christmas tree: optional, but…not optional.

Want to see the formula in action? Try this dinner salad on for size: 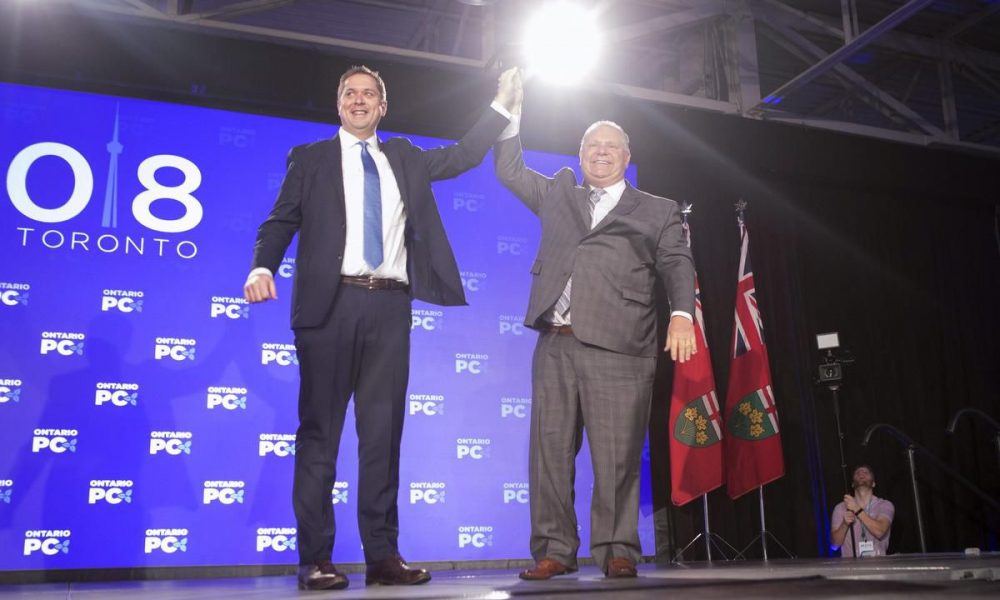 In the eyes of federal Conservative Leader Andrew Scheer, Prime Minister Justin Trudeau’s carbon-pricing plan makes him the “enemy” of commuters and families.

To Doug Ford, Trudeau’s greenhouse-gas reduction initiative places him “next” on the premier’s political hit list.

The shadow of the Liberal prime minister, who is up for re-election next year, loomed large over this weekend’s Progressive Conservative convention at the Toronto Congress Centre.

During a rousing speech to 1,000 Tory partisans on Saturday, Scheer received a standing ovation when he attacked the federal Liberals’ measures to reduce emissions that contribute to climate change.

“What about all those people who have to drive to work, have to commute, to take their kids to activities? What about the small- and medium-sized businesses who have to make payroll with higher regulatory costs? There’s no special breaks for them in Trudeau’s carbon scheme,” the Tory leader thundered.

“The commuter, the office worker, the hockey mom, the retired senior — those are the people that are getting dinged by this carbon tax. That’s why it’s unfair. Everyday Canadians should not be forced to pay more for everything,” he said.

With Ford, a millionaire who inherited his father’s successful business, sitting in the front row, Scheer lampooned Trudeau as a wealthy scion out of touch with ordinary Canadians.

“Justin Trudeau inherited a great fortune — and I’m not talking about the trust fund,” the federal leader said.

“When he became prime minister, he inherited a surplus budget and a booming economy, thanks in large part to our Conservative government, but he’s squandered it.”

“The very same Queen’s Park Liberals who’ve left Premier Ford and his team with the mess that they’ve inherited have moved on to Ottawa and are trying to do the same thing to Canada, that they did to Ontario. We can’t let that happen,” he said.

In Ottawa, Eleanore Catenaro, the prime minister’s press secretary, shrugged off the attacks.

“The Conservatives have been fixated on Justin Trudeau for years,” said Catenaro.

On Friday night, Ford warned he “will not sit by and let Justin Trudeau make life more expensive for Ontario seniors and families.”

“The carbon tax fight is far from over. We are going to challenge it in court,” the premier said, referring to a $30 million legal fight.

“We’re going to force the federal government to show the carbon tax rip-off every time you pay your heating bills or fill up your car,” said Ford.

“I’m putting the prime minister on notice. We’ve already taken Kathleen Wynne’s hands out of your pockets — and Justin Trudeau, you’re next,” he said.

Under the federal plan, the average Ontario household will pay $244 more annually on gasoline, natural gas, and home heating oil, but will receive $300 back in rebates for a net gain of $56 a year, bankrolled by big industrial polluters.

Scheer, who avoided reporters after his speech, did not broach Ford’s decision to axe Ontario’s independent French-language watchdog and scrap a francophone university in Thursday’s fall economic statement.

That move, as the provincial Tories scramble to cope with $14.5 billion deficit, has sparked controversy in Quebec and could hurt the federal party there in next year’s election.

Along with melding the French-language services commissioner’s responsibilities and those of the Ontario child advocate watchdog into the ombudsman’s office, the government has eliminated the independent environmental commissioner’s job. That function will now be served by the auditor general.

“Canada’s conservative movement needs to look up from petty partisanship and recognize the real enemy: the enormous damage that unchecked climate change will wreak on our health, homes, economy and ecosystems,” said Stewart.

“Rather than scoring cheap political points by misrepresenting the effect of putting a modest price on pollution, true conservatives should be defending the right of their kids to inherit a world that hasn’t been destroyed by short-term greed.”