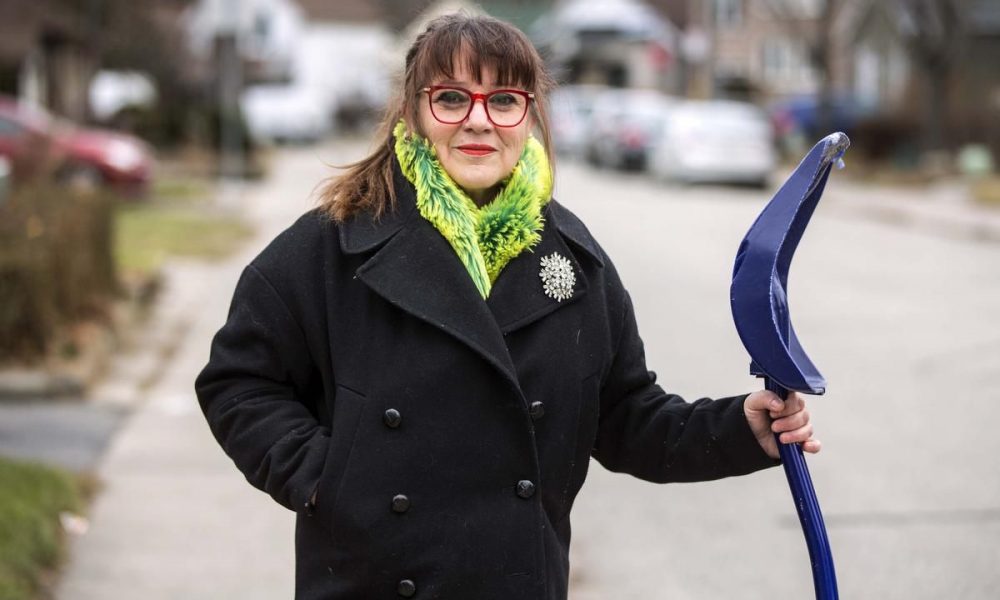 In a new occasional series, the Star delves into 311 data to see what our concerns say about the city. In this third instalment, we look at an issue that’s top of mind as the temperature drops: snow clearing.

In the heart of winter, Gina Stoneham’s sidewalk does not get plowed by the city.

Less than a five-minute walk away, Abigail Manzano’s does.

But when it comes to snow and ice, theirs is a tale of two sidewalks. Only the eastern stretch of Pritchard, where Manzano lives, makes the cut for city sidewalk snow clearing.

Manzano says the city usually shows up to clear the sidewalk in front of her home “within 24 hours.”

Meanwhile, the west side, Stoneham finds, often turns into a treacherous icy pass.

“I am so paranoid that my husband bought me a pair of boots last year for Christmas that, with a special key, flip out these spikes,” says the 64-year-old. “Those things saved my life a few times.”

The neighbourhood’s winter partition hints at a deeper divide in the city.

Across Toronto, the city plows the majority of sidewalks, especially major routes. But in a vast and complicated Toronto “no plow zone” — which includes stretches of sidewalks in the old city of Toronto, York and East York — residents are responsible for clearing the sidewalk in front of their own properties.

The city says it’s because of those sidewalks don’t meet criteria for clearing — that they’re too narrow, or there are other obstacles such as utility poles. Critics says it’s the legacy of a pre-amalgamation inequity that’s been carried on.

The no-plow areas are an issue pedestrian and seniors’ advocates say puts people of all ages at risk.

A Star analysis of 2018 snow and ice-related calls to 311, the city’s non-emergency hotline, broken down by the first three postal code digits, found the most (165) came from the west Toronto area that includes Rockcliffe-Smythe. Those stats cover complaints in 19 categories, including general snow removal, icy sidewalks, road plowing and sidewalk snow clearing.

The snow divide, Reid says, is a legacy from before amalgamation.

The city’s 311 complaints show fewer calls about snow removal in the downtown core closer to the waterfront.

There’s a concentration of snow complaints in the west-end neighbourhoods around Rockcliffe-Smythe that would fall into the some-sidewalks-cleared-some-not area, as well as the East Beaches/western edge of Scarborough.

Per capita, the western chunk of the old ward of Scarborough Southwest — which also had the most overall noise complaints — topped the list for snow and ice related grumbles.

Out of the roughly 7,000 kilometres of sidewalk in the city of Toronto, about 5,900 are plowed mechanically by the city, according to city spokesperson Eric Holmes.

“There are some sidewalks that, unfortunately, equipment cannot safely clear using mechanical means due to encroachments and existing structures (e.g. retaining walls, utility poles, on-street parking, narrow sidewalk etc.),” wrote Holmes in an email. The city offers free sidewalk clearance for seniors and people with disabilities who live in these areas.

So far in this relatively mild winter, the city has issued just four notices of inspection in response to complaints across Toronto and they were resolved without fines to homeowners, according to Holmes.

This logic of plowing some areas but not others leaves “a critical piece” of snow clearance missing, says Nancy Smith Lea, director of the Toronto Centre for Active Transportation (TCAT), who calls on the city to clear all sidewalks, like Ottawa does.

Residents don’t always shovel, even though they can be fined for not clearing their stretches of sidewalk within 12 hours of snowfall. And even one icy patch can be dangerous.

“For many people this is the way that they move around the city,” she said, calling it an equity issue.

“The people who are held prisoner in their homes tend to be the elderly or people with disabilities, people who don’t have cars.”

A 2016 Toronto Public Health report found there were almost 30,000 emergency department visits and 2,800 hospitalizations among Toronto residents due to falls on snow or ice from 2006 to 2015.

This cost the provincial health-care system almost $4 million per year and the city $6.7 million a year in insurance liability claims.

And most falls happen in the areas that the city does not clear, according to the report.

Back in Rockcliffe-Smythe, it’s something Stoneham worries about.

“I can’t afford to fall down and break my hip because I work for myself,” she says, adding it’s unfair there’s sidewalk clearing in some areas and not others.

Aside from sidewalks, she thinks the whole neighbourhood is “neglected,” and often seems to be last on the list when it comes to road plowing.

Rockcliffe-Smythe Community Association co-chair Miriam Hawkins notes it has “wide streets and sidewalks,” sitting up against the western edge of Etobicoke. So there’d “be no issue” with them being too narrow to plow — if that’s why the city isn’t doing it.

“It almost sounds like they’re not committed anywhere in Toronto but if you’re lucky they might do it,” she says.

“It’s not going to go away, it’s going to get much more complicated,” she said, with more older adults and more extreme storms.

Even in an average winter, a fall can result in a broken bone or hip and send older adults into a downward spiral, Tamblyn Watts says.

“A safe and clear sidewalk is quite literally the difference between life and death for many older people,” she adds.

“The human cost is real.”

Part 1: Toronto is known for dead raccoons and potholes. The city’s 311 nerve centre knows this reputation is well-earned

Part 2: Is this the noisiest neighbourhood in Toronto?