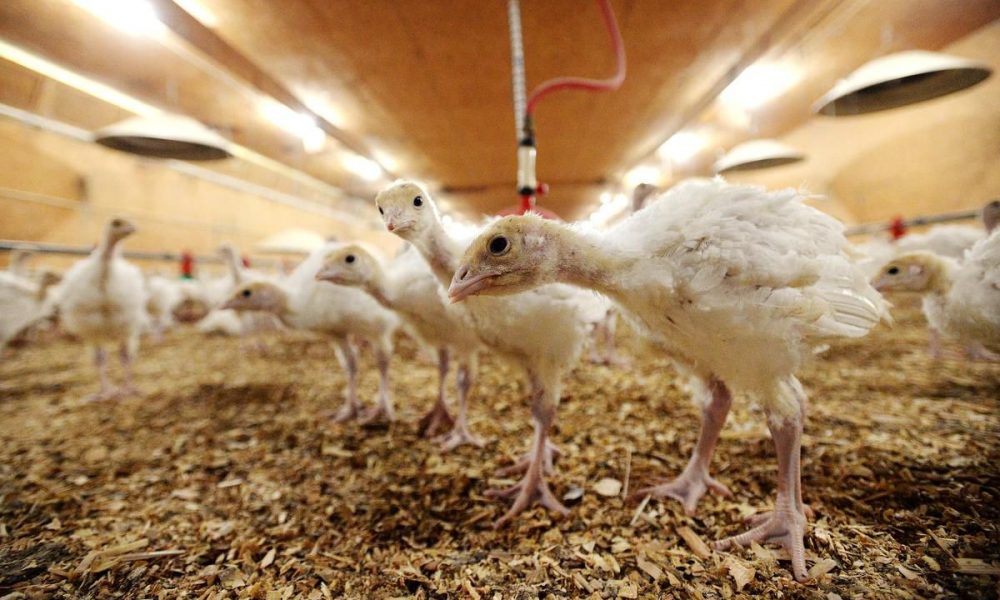 VANCOUVER—The familiar odour of ammonia wafts through the air as fourth-generation farmer Derek Edwards swings open the wooden doors to one of his heated barns, greeted by 4,000 juvenile turkeys, several of which dash over to peck at his feet.

The Edwards farm in Richmond is more than a century old, and Derek, 43, is the latest in a line of turkey farmers, with roots tracing back to the British Isles. Turkey is involved in nearly every aspect of his family’s lives. It’s their protein each day for their meals and it’s the family’s source of income. Even his twin daughters’ pets are turkeys: Blackie and Whitie, named after the black and white colours of their plumage.

But there are fewer birds in the Edwards barn compared to five years ago. The industry as a whole is shrinking, with Canadians consuming fewer whole turkeys per year and nowhere more so than in Vancouver.

“Not as many people are eating turkey for holidays,” Edwards said, as he listened to the distinctive chirps of his four-week-old Christmas flock, wary of signs of distress. “The families aren’t as big as they used to be. For a lot of new Canadians, I don’t think we really have broken into that segment of the population.”

The Canadian turkey industry is in trouble. Retail sales have decreased steadily: Industry figures show that more than a quarter of annual sales at grocery-store checkout counters — the equivalent of 22 million kilograms of turkey — have disappeared over the past 15 years.

In British Columbia, the province hit hardest by the decline (annual grocery-store sales in the province are down by more than six million kilograms since 2002, according to Turkey Farmers of Canada), industry leaders are grasping at possible explanations, such as lack of advertising by grocery chains and lack of appetite among a growing population of Asian and South Asian customers.

“That’s just another sign of our times,” said Trevor Allen, who raises about 12,000 free-range turkeys each year at his farm in Chilliwack, B.C. “You know what, I did see a real spike in my whole-bird sales when we had 9/11. People were screaming for it. I think what happened is people suddenly realized family is important. Then, it slowly, started going to wherever it is today.”

The losses have been difficult for an industry that relies so much on holiday retail sales, said Michel Benoit, general manager with the B.C. Turkey Marketing Board. With Thanksgiving and the winter holidays rapidly approaching, the marketing board has been working furiously to find new customers among the Asian and South Asian customers who have traditionally shied away from the festive bird.

“This weekend, we had in-store demos where we were sampling turkey with some Asian sauces in five different locations that were highly Chinese or South Asian populated,” Benoit said in mid-September. “We wanted to show them it’s a good protein source, it’s a tasty product and it’s something they should try.”

Asians and South Asians have, in recent decades, been among the fastest-growing immigrant populations in B.C. According to the 2016 Census, the population the two ethnic groups have grown by nearly half a million since 2001.

Henry Beh, a Chinese-Malaysian immigrant who moved to B.C. four decades ago, said festive options for the Chinese community tend to involve barbecued chicken, pork or duck, meats that are perceived to have a more tender and juicier profile.

“Whenever there’s a festival, Autumn Festival or Chinese New Year, there will be 30 to 100 people lining up just because they want to buy the barbecue. But turkey, I don’t see any turkey barbecued at the Chinese stores. It’s seen as not desirable,” Beh said.

Even if the Asian and South Asian communities were to buy in, a systemic problem would remain: an enormous amount of turkey purchased for Thanksgiving and Christmas is priced at a loss. At most grocery stores, it’s common to see whole-turkey deals for 99 cents a pound or less. That leaves virtually no room for retailers to make a profit, since B.C. turkey producers wholesale their live birds at a market-controlled rate of about 91 cents a pound.

“It’s great for us — we get to sell a bunch of turkeys,” said Benoit, of the marketing board. “But, on the other hand, the rest of the year, there’s a reluctance by people to pay $4 (per pound). It fixes in the consumer the mindset that 99 cents a pound for turkey is a fair price and anything over that is not.”

In response, some producers, including Derek Edwards in Richmond, have diversified their flocks so as to include “specialty” and organic birds that, because they’re given better feed and more space to roam in, go for as much as $20 a pound at high-end grocers like Whole Foods.

But, at the moment, premium, specialty and organic products make up just seven per cent of all turkey production in the province.

“There’s all kinds of debate why the whole-bird consumption is down. I think the whole demographic is shifting and changing,” he said. “I think there’s a generation — you give them a whole turkey and they go, ‘What? I don’t have anything to put that in.’ ”

Wiebe’s company has been recently focused on trying to market turkey products outside of the October and December rush, but progress is limited, in part by consumer demand and in part by the amount of shelf space retailers are willing to offer year-round

There are also extra risks associated with raising organic and specialty birds. For example, while the certification standards generally prohibit medications, turkeys that roam in open pastures can be exposed to disease-carrying wild birds. With a bird-flu outbreak in the province still in recent memory, farmers like Edwards have to monitor the health of their flocks multiple times every day.

One such disease, blackhead, has recently resurfaced as a topic of concern after the only legally permitted treatment in Canada was withdrawn in 2016. The disease, which can be contracted when birds eat infected worms, is named after its symptom of turning turkeys’ heads black. A single infection can wipe out entire flocks. To compound matters, outbreaks of the disease generally occur more in B.C.’s temperate climate compared to the rest of Canada.

Two years ago, Benoit said, a farmer who attempted to start a large-scale organic farm had his efforts completely dismantled by blackhead.

Allen, the Chilliwack free-range turkey grower, said he worries about blackhead every day.

“When I go in and pick up one or two mortalities every couple of weeks, I start wondering, ‘Is this the start?’ ” he said. “I wouldn’t even want to think about what would happen if that came on my farm.”

Nickel, who comes from a B.C. turkey-farming family, said the PHS petitioned Health Canada to approve a new anti-blackhead medication used in Europe, but were rejected. Health Canada said it rejected the medication in part due to concerns that the antibiotic would create additional resistance in bacteria harmful to humans.

Back at the Edwards farm, its patriarch wonders how secure the turkey business will be in the future as he turns over the sawdust used as the birds’ litter. The young turkeys obediently move out of the way, in a semicircle expanding from Edward’s pitchfork, before returning to nest in the hills and dips created by the churn. Looking at his birds, Edwards’s hopes remain high for a push in the industry to market easier-to-prepare processed turkey products to the elusive Asian and South Asian markets.

“Living in Richmond, you have Asian friends, South Asian friends,” Edwards said. “My buddies — I was like, ‘Why don’t you eat a turkey?’ They said, ‘Well, we don’t know how.’ I said, ‘You can buy it as ground turkey instead of ground chicken or ground beef.” They said they hadn’t really thought of that.”

Benoit at the marketing board said ground turkey has been the one true area of significant growth in the industry. The key is the additional processing, whether the turkeys are segmented, made into sausages, or sandwich patties. And while it’s unclear whether marketing efforts will succeed in selling the non-traditional, prepared products, it seems many in the industry are on board.

“What’s going to make it on the centre plate? I know a whole turkey won’t. Is it a cutlet? Is it marinated? Is it a value-added item that people can learn to use within their protein for the week?” Wiebe, the organic processor, said.

“That’s where our industry is going … They need it cooked in less than 30 minutes and it needs to complement everything else around the plate.”

Beh also suspects ground or cut-up products may be the only way to break through his Asian culture’s reluctance for the big bird.

“If you take the whole turkey and make them into smaller portions, maybe that’s the way it sells better,” he said. “More packaging. That might be able to sell.”

However, this Thanksgiving, Beh’s family will be dining out, likely at a Chinese restaurant.