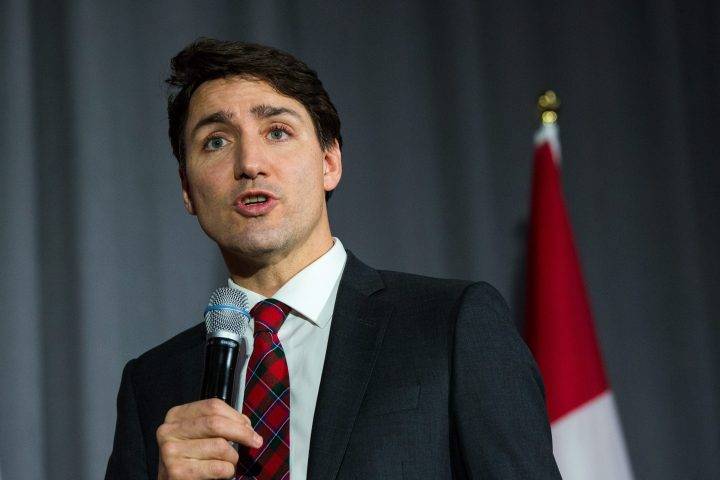 OTTAWA — Prime Minister Justin Trudeau says Andrew Scheer‘s Conservative party is in the exact same place it was under Stephen Harper‘s leadership and that’s why he and his Liberals will continue “pointing out” the similarities.

The Liberal party put the Harper stamp on Scheer the day he was elected leader of the Conservative party, billing him as a far-right social conservative. The Liberals raise Harper frequently and drop his name in fundraising emails to supporters.

“We are focused on what is truly important while Andrew Scheer’s Conservatives are stepping up the same divisive and negative politics we saw from Stephen Harper,” wrote Liberal party president Suzanne Cowan in an email blast sent this week.

In an interview, Trudeau told The Canadian Press that the Conservative party’s approach to a range of issues shows that it does not have plans or ideas that differ from Harper’s.

“Canadians so clearly rejected Stephen Harper’s approach to government, the approach in the 2015 election, and yet on climate, on the economy, on international engagement, on migration issues, on Indigenous issues, they are very much still in the exact same mode that they were pre the 2015 election.”

“I think that’s sort of something that is worthwhile pointing out to Canadians,” said Trudeau.

In almost the same breath Trudeau said that in the next election he’s not going to try to “vilify” or “demonize” his opponents. But he suggested that he doesn’t view his comparison of Scheer to Harper as vilifying him.

Trudeau said when he was emphasizing his “sunny ways” during the last campaign, people were quick to point out any time he said something critical of Harper. But, he said, he’s going to be very sharp any time there are clear distinctions of policy between him and Scheer, or when he thinks Conservatives are trying to divide the country.

“I will make no apologies for being very passionate, sometimes overly enthusiastic, in the way I engage in robust debate but I am as much as possible going to keep it on a substantive level.”

READ MORE: In Christmas message, Trudeau urges Canadians to ‘stand together,’ help out

He also said Scheer himself has not been able to articulate his differences from his predecessor. He pointed to an Assembly of First Nations meeting earlier this year where a chief directly asked Scheer how he’s different from Harper and Scheer asked for “a little bit of patience for when our platform gets released.”

Brock Harrison, a spokesman for Scheer, said if anyone is stuck in 2015, it’s Trudeau.

“He wants to re-fight the 2015 campaign because virtually everything he and his government have done since then has been a failure,” said Harrison, adding that Trudeau will have to explain why he’s “failed to balance the budget, secure the border, build pipelines, and provide relief for Canadian families.”

Trudeau claims it’s not his #WelcomeToCanada tweet but the U.S. political climate that has migrants ‘fleeing’ America

Conservative MP Pierre Poilievre made similar comments in an interview recently, suggesting Trudeau points to Harper to deflect from his faults and because he’s feeling nervous about his chief opponent.

“You know the fact that he keeps trying to change the channel from Scheer is probably a good indication that he’s afraid of running against Scheer,” he said.

Poilievre said Trudeau uses the strategy to avoid taking responsibility for his own “failures,” and that whenever he’s asked about something he quickly deflects.

“It doesn’t have to be Stephen Harper, it can be anyone. But it’s the No. 1 rhetorical technique he employs — to quickly change the subject to another human being as soon as he is caught in trouble or failing. So we expect more of that, it’s actually a common tactic among privileged trust-fund babies.”