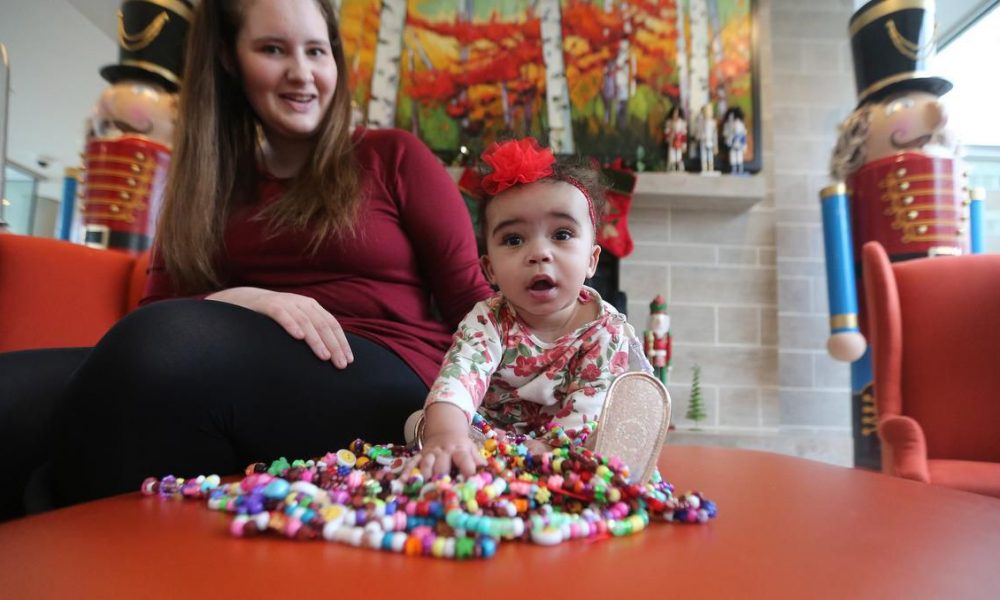 She is fighting for time to love her daughter.

Because Jaiden Cowley knows that every moment with Amira is a gift. It has been since she was born 10 months ago with a broken heart.

Amira is waiting for a tiny, strong new one.

“We didn’t know if Amira would make it to Christmas,” says Jaiden, herself just 19. “I live every day like it could be her last.”

A life-time ago, on her first day working at a call centre in Hamilton (she was saving for college to become a nurse), Jaiden learned she was pregnant. Nineteen weeks into the pregnancy, she got more news: there was something drastically wrong with the baby’s heart. It was a congenital defect.

Some of the doctors suggested an abortion. Or said Jaiden should have the child, take it home and let it die quietly in the first few days.

But Jaiden chose another option — to do whatever she could to keep her baby alive. The baby’s father decided not to be involved.

On February 12, at 39-weeks gestation, Jaiden was induced at Sick Kids Hospital in Toronto. A team was ready to whisk the newborn away.

“I pushed her out and she was gone,” says Jaiden, her voice catching. The new mom didn’t get to hold her baby. Or even see her.

Amira — it means princess in Arabic — has Heterotaxy Syndrome. Her heart is on the wrong side of her body. And it doesn’t have all the right parts.

She was 44 hours old when she had her first surgery. Two days after that, she went into cardiac arrest.

“She died right in front of me,” says Jaiden.

Amira was placed on life support in the Cardiac Critical Care Unit, her chest left open so doctors could peer in.

“I saw her little heart,” says her mom. “It was only the size of a grape.”

Amira spent 180 days in hospital. During that time, doctors told Jaiden her daughter would need a heart transplant.

Jaiden was crushed yet again.

“Why is the heart that I gave her not working?” she agonized.

On June 11, Amira was placed on the transplant list, through the Trillium Gift of Hope Registry.

Amira is a strong princess and in August, she moved in with her mom at the Ronald McDonald House near Sick Kids. They have been there ever since, seeing specialists and waiting to dash to the hospital should a pediatric donor heart become available.

Jaiden’s mom and other family from Hamilton visit on weekends.

Amira is abeautiful girl. She is plump and smiley, often sporting a sparkly cloth headband with a big cheerful bow. She says “Mama” and her laugh is music.

Christmas day will be spent at Ronald McDonald House. Jaiden has to isolate herself and the baby from other guests because she can’t risk infection.

Right now, Amira is a Status 3 on the Trillium transplant registry. Only Status 4 recipients are more critical, being on the verge of death.

Another child whom Jaiden met at Ronald McDonald House just got her new heart. She spent 500 days on the wait list.

Pediatric organ donations are a rare commodity. Children just don’t die at the rate of adults and those who do are less likely to have their parents’ consent to be donors. This is why Jaiden is sharing her story. She wants grieving parents to know their donations could save other children. And that a bit of their child can live on.

Organs are matched by size, blood type and other factors, but not age. Therefore donors under the age of one don’t necessarily correspond with the 65 patients under one that received an organ transplant.

As of Dec. 17 there are 11 patients under the age of one on the transplant waiting list.

If Amira gets a heart, she has a good chance of living until she is 10. After that, she will need another heart transplant, doctors say.

That is a lot of agony to go through. There are great risks of complications and Amira will be on anti-rejection drugs forever.

It only takes Jaiden a heartbeat.

A Go Fund Me account called Help Heal Amiras Broken Heart has been set-up to pay for some of her medical supplies that are not covered by OHIP. The goal is $5,000, with about $1,300 being raised so far.