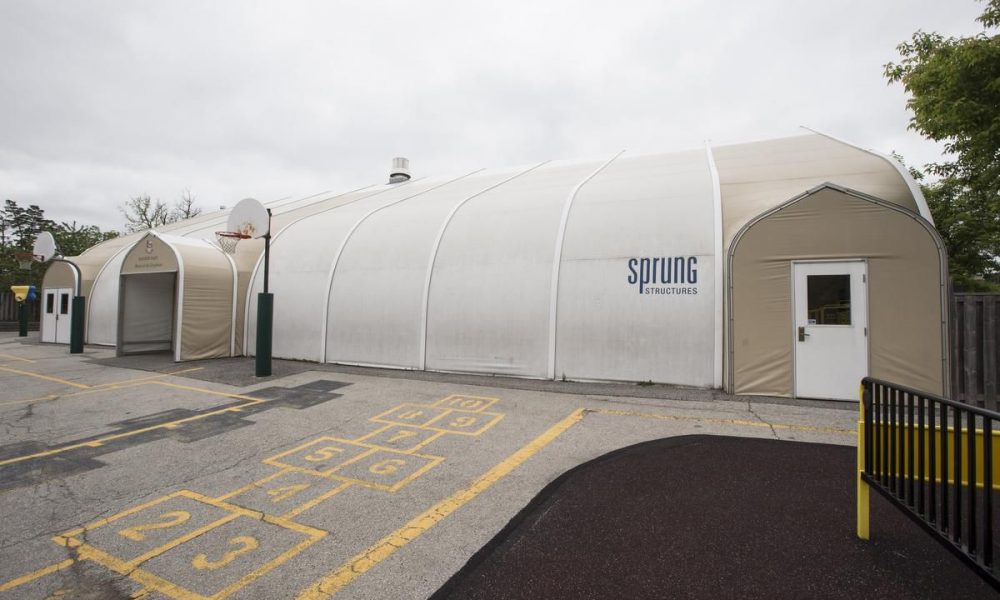 The head of Toronto’s shelter and housing support division says he’s “very confident” his department has taken steps to avoid a repeat of the “challenges” it faced last winter finding shelter for the homeless during cold weather.

On Friday, the city rolled out its 2018-19 winter plan for the homeless. The plan calls for three new prefabricated structures — there’s an option for a fourth if demand warrants — that can house single adults or couples, as well as pets.

The portable “Sprung” structures, manufactured by a Canadian company will be scattered in the east, west and central sections of the city. The first, to sit on a Green P parking lot behind Lamport Stadium on King St. W. near Dufferin St. will open Dec. 15.

The other two, one on a green field on Fleet St. near Strachan Ave., the other on a parcel of undeveloped property at Lake Shore Blvd. E. and Parliament St., are set to launch Jan. 31.

The openings are staggered because the structures, which have metal skeletons, fabric coverings and thick core insulation, each take about 10 to 12 weeks to erect, the city said.

The King St. and Lake Shore Blvd. structures have a capacity to shelter 100 people each, while the capacity of the one on Fleet is 80 people.

The Lamport site will remain open for 12 months of the year, while the others will stay open based on demand, Paul Raftis, general manager of the city’s shelter, support and housing administration, told reporters during Friday’s press conference at city hall.

All three, which cost $2.5 million each, have washrooms, as well as shower and laundry facilities.

In addition, the city is opening a temporary 24-hour respite site with up to 200 spots at the Queen Elizabeth Building at Exhibition Place beginning Nov. 15 that will be phased out at the end of January, as the three prefabricated structures come online.

In all, there will be 11 all-day respite centres — eight in regular buildings — that will be run during the winter by various social service agencies, up from one respite centre four years ago.

The changes this year will see about 600 respite spaces in total this winter, up from the previous 455 and the city is budgeting $3 million to operate the winter enhancements, money that includes staffing, food, security, and costs to operate the buildings.

The city will continue to use its Metro Hall facility as a warming centre when an extreme cold weather warning is triggered — when temperatures drop to colder than -15 C or -20 C with wind chill.

Last winter this happened on 31 days.

Shortage of adjudicators hits Landlord and Tenant Board

The harsh cold caused chaos for the city. Some community centres and the Moss Park Amoury were pressed into service as shelters.

This won’t have to happen this year, the city says.

A March report by the city’s ombudsman that blasted its winter respite services, found staff gave inaccurate information about capacity at the Better Living Centre at Exhibition Place on at least two occasions.

“It is only reasonable to infer that they (staff) gave out this sort of misinformation in more instances than just the ones we investigated,” Ombudsman Susan Opler wrote in her report.

The report also found staff at Toronto’s intake call centre and the 311 information line had outdated details about the addresses for respite sites and their capacities.

Raftis told reporters Friday that the findings from Opler’s report informed the enhancements the city is making.

Aside from adding 102 net new beds to the city’s permanent shelter system by the end of this year (the city has 7,000 beds in 63 city shelters). Raftis told reporters the city has invested in its central intake referral service, with additional staff to respond to calls from the public.

There will be better technology to manage the intake calls and new working space to help boost call centre productivity.

The changes include the creation of a duty officer role that will be responsible for flagging problems that arise and working with central intake to ensure homeless clients coming into the system are transitioned smoothly.

“We improved operational reliability and system oversight of the entire shelter system, to address any unexpected events that may arise,” Raftis said.

He went on to say he’s confident the changes will avoid what happened last winter, “but we can’t predict demand. So it’s possible we will receive many more people in the city looking for shelter services and we will respond to that demand.”

Kira Heineck, the executive lead for Toronto Alliance to End Homelessness (TAEH), said the changes show the city is doing a “very good job” in preparing for winter.

“We know there will be people who will need immediate emergency shelter and assistance, and we need to have a robust system in place. The improvements they have made are significant, and the right ones. I can’t criticize that,” Heineck said.

However, her group is working to reduce and end chronic homelessness, so in a few years “we’d like to be in a place where the shelter plans are about reducing beds and services and not increasing them,” she said.