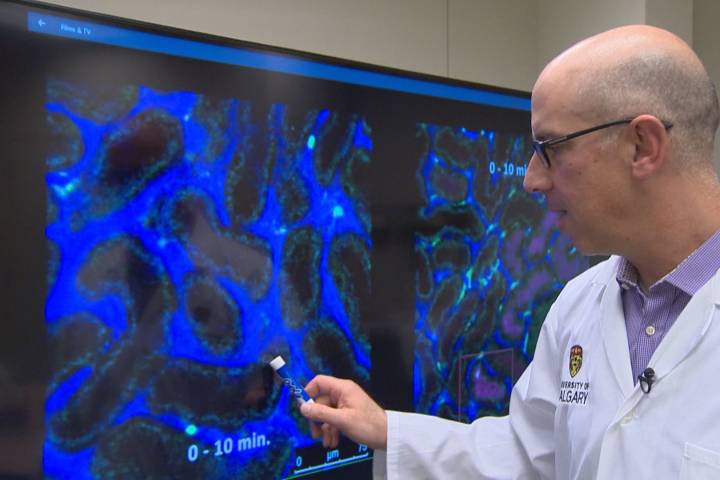 It’s something most have heard from their doctors before: stay hydrated and drink plenty of water.

But in certain emergencies, there’s no time to make sure a patient is hydrated, risking damage to the patient’s kidneys.

It’s a reality that Sam Hannon knows too well.

The 78-year-old suffered a heart attack nearly three years ago and was on his way to a full recovery following a procedure that placed four stents in his chest. An intro-vascular contrast dye was used so doctors could get a better picture of Hannon’s heart condition.

“I started losing weight…. I threw up a few times, that kind of thing,” Hannon said.


READ MORE:
Accessibility is key for youth struggling with mental health: U of C

In his search for answers, he checked himself back into the emergency department. That’s when it was discovered that his kidneys weren’t functioning properly.

“In about eight per cent of people who go for procedures to their heart, and some other procedures where dyes are used to take pictures of the vessels, that there is a risk of injury to the kidneys,” kidney specialist Dr. Matthew James, said.

Hannon’s kidney function was at 13 per cent.

“I was told nine per cent was dialysis mode, scared the crap out of me,” he said.

Although there are no therapies or treatments to speed up the healing process, doctors focus on managing medication and hydration following the injury.

Meanwhile, researchers at the University of Calgary have been studying ways to prevent kidney damage during medical procedures that use dye for the past five years.


READ MORE:
New guidelines developed at U of C to help manage cholesterol

Their research determined dehydrated kidneys have a harder time processing the contrast dye, which is then absorbed by the kidneys and causes damage.

“It reinforces the concept of hydration, especially for contrast dye procedures, and why it’s important to stay hydrated to avoid injuring the kidneys,” Dr. Daniel Muruve said. “What’s exciting about this research is that it’s shedding light on something we’ve been telling patients for years.”

But if hydrating a patient in an emergency situation isn’t possible or — in some cases — safe, a therapeutic solution may be in the works.

“We did identify a pathway and a drug that was effective in preventing kidney injury, even in mice that were dehydrated,” Muruve said.

Muruve, who is one of the collaborators on the study, believes drug treatments will be available within the next five to 10 years. That is the next step in his research.

As for Hannon, his kidney function has risen to 42 per cent. He still does his carpentry and handy-man work around his home.

He’s also on a regimented diet and is feeling better every day.