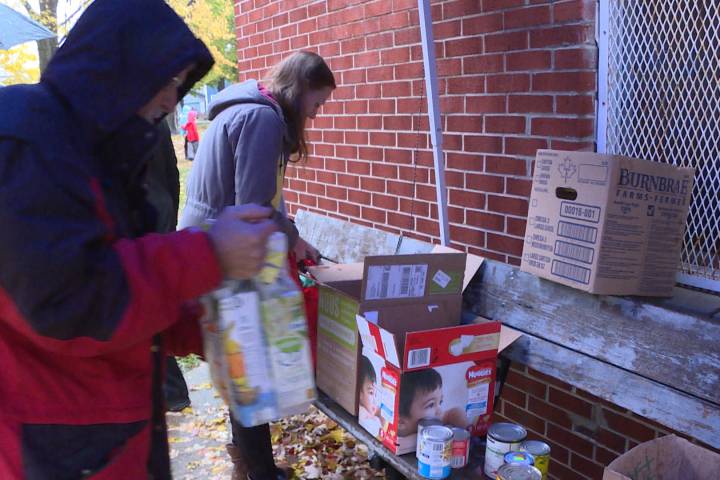 The spirit of giving is a phrase usually reserved for Christmas, but this year, it could be argued that it also applies to Halloween in Kingston.

Mc Burney is the official park name, but residents often call it “Skeleton Park” because of its history as a cemetery in the 19th century.

The early evening event also featured music from the Queen’s University marching band and Spencer Evans and the Goat Steppers.

The Goat Steppers gave the event a Mardi Gras-type feel, with their New Orleans-style music delighting the roughly 200 people in attendance.

The family-friendly event, while bringing the local community together, also provided an opportunity to help the larger community, said Artistic Director Greg Tilson.

“Partners in Mission Food Bank is collecting here right here in the middle of Skeleton Park, just as an additional way to help out and give back to the community.”

Allan Wilson lives on Yonge Street and had the Partners in Mission Food Bank in his mind as well.

For the last four years, Wilson and his family, with the help of a close family friend, spend the week before Halloween building a haunted house in Wilson’s backyard.

Wilson has everything from animatronics and decorations to live actors on hand, waiting to scare the trick-or-treaters brave enough to walk down his driveway.

The price of admission to the popular neighbourhood haunted house is a non-perishable food item for the food bank.

Wilson says the food bank made a difference in his life shortly after he had a heart attack eight years ago.

“We had a child in the house and I didn’t know how I was going to feed her for the next few days,” he said. “If it wasn’t for the Partners in Mission Food Bank, I think we would have starved for a few days.”

Along with providing food hampers, the Partners in Mission Food Bank helps support 16 local hot meal and shelter programs in the Kingston region.