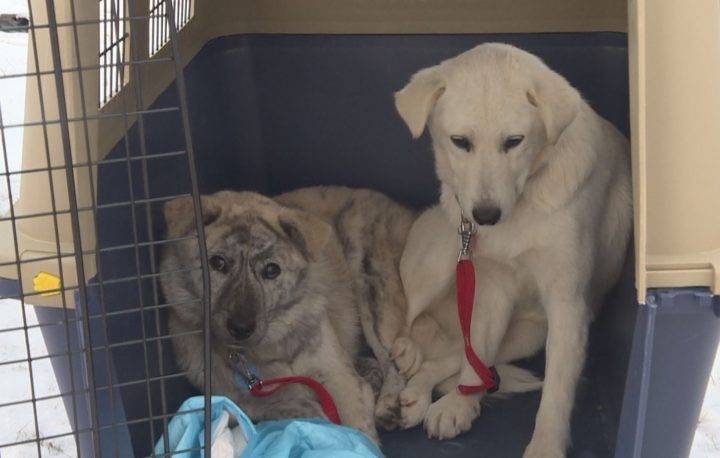 Two puppies rescued from a meat farm in South Korea are looking for forever homes in Calgary.

The dogs were born and raised for meat but with the help of an Alberta animal rescue group, the two canines are getting a second chance at life.

After a 16-hour flight, puppies Alison and Liz arrived in Calgary over the weekend met by members of Rocky Mountain Animal Rescue (RMAR).

In partnership with Go Rescue Korea, RMAR was able to carry out the rescue — the first of its kind for the Canadian group.

Both dogs were found on an illegal dog meat farm in South Korea where the conditions were described as horrific by RMAR volunteer Krishneel Prasad.

“[The dogs] were living under a bridge in cages with 10 to 15 dogs and drinking out of muddy rainwater,” said Prasad. “They were just waiting for their time to be slaughtered.”

Alison arrived in Calgary over the weekend after being saved from a South Korean dog meat farm.

Because of the abuse Alison and Liz endured, they have been reluctant to leave their kennel since landing in Calgary. Amanda Lo, operations manager of RMAR, is optimistic the dogs’ demeanors will change.

“When they came [to Calgary], they were extremely fearful, which is understandable for their history,” Lo said. “But I think they’ll do really great.”

Officials estimate there are still more than 17,000 dog meat farms in South Korea.

Despite a decline in demand over the past decade, millions of dogs are slaughtered every year for their meat, RAMR said.

Both Alison and Liz are Jindo Cross, a breed described by the American Kennel Club as being “alert, bold and intelligent.” Prasad said these pups just need a second chance.

“They’re our best friends and they don’t know what it’s like [to be pets],” said Prasad. “They just need to have that opportunity.”

Liz arrived in Calgary over the weekend after being saved from a South Korean dog meat farm.

The next step is to find homes for Alison and Liz in Alberta or British Columbia. Lo said the families who adopt the dogs will need to be patient as the animals transition from being livestock to family pets.

“I need to wonder what their personalities will be like and what sort of family I should be matching them up with,” said Lo.

RMAR said it will continue to try to save more dogs from meat farms across the world in order to give them the same opportunities as Alison and Liz.