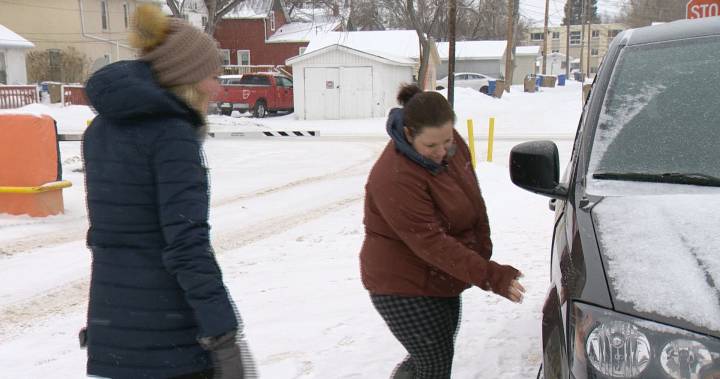 A Balgonie, Sask. woman is speaking out after what appears to be a shocking case of road rage was caught on camera earlier this month.

Rheanna Dale says she was on her way home from work and had just passed a snow plow when she noticed a black Ford F150 following close behind and driving erratically.

“Being that he was swerving in and out of traffic I chose to stay in the passing lane, because I thought if I moved into the driving lane, he would swerve out and possibly hit me,” Dale said.

It happened around 4:00 p.m. on Highway 1 just east of Regina. Another driver captured the entire incident on their dashcam, which shows the truck abruptly pulling into the driving lane, swerving back into the passing lane and then ramming into Dale’s minivan.

“He eventually pulled out around me and then when he came up beside me he swerved right into me and then took off,” Dale said. “All I know is that there were no break lights, he didn’t even make an attempt to stop.”

Luckily, Dale managed to avoid the ditch, but her vehicle sustained around $3,000 worth of damage.

“I’m really glad my children weren’t in the vehicle, they are two and six and would have been pretty traumatized by all of it,” Dale said.

During the incident, Dale wasn’t able to get a license plate so she posted the video to social media in an effort to find the driver.

“I’m hoping that I can just find something and hopefully save someone else’s life down the road because it could have been way worse than it was,” Dale said.

At this point, no one has been able to get a license plate number, but RCMP says the incident was reported and they are aware of the video.