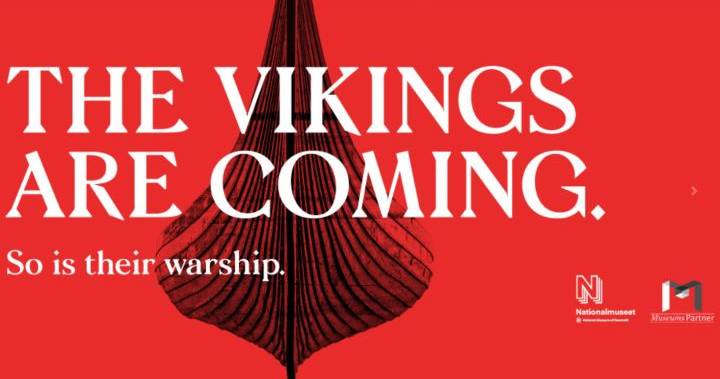 The Royal Alberta Museum announced this week that the inaugural exhibit at its new 3,660 square-metre feature gallery will be “Vikings: Beyond the Legend.”

Watch below: In October 2018, Julia Wong filed this report about how many visitors the new Royal Alberta Museum received in the first few days after it opened to the public.

“The largest international touring exhibition of Viking artifacts opens at the new Royal Alberta Museum this spring,” the museum said in a news release.

According to the museum, artifacts featured in the exhibit will include a reconstruction of the 37-metre Roskilde 6, the longest Viking warship ever found. It features 1,000-year-old wooden planks and metal supports “showing the ship’s original lines.”

The display of more than 650 artifacts will also feature jewelry, swords, coins and tools from the ninth to tenth centuries that can be viewed, and the exhibit will be rounded out with interactive experiences and augmented reality.

“We are excited to see the new Royal Alberta Museum host its first feature exhibition,” said Ricardo Miranda, Alberta’s minister of culture and tourism. “This is another example of opportunities the museum brings to Albertans, so I encourage everyone to go feed their curiosity this April.”

“Beyond their legendary reputation as warriors, these skilled artisans, farmers, traders and explorers influenced much of our modern society,” Chris Robinson said. “We are honoured to host this world-class exhibition.”

Watch below: Some Global News videos related to vikings.

The exhibit is a joint venture between the National Museum of Denmark and MuseumsPartner in Austria.

“Vikings: Beyond the Legend” runs from April 18 to Oct. 20. Tickets will be available on the museum’s website.