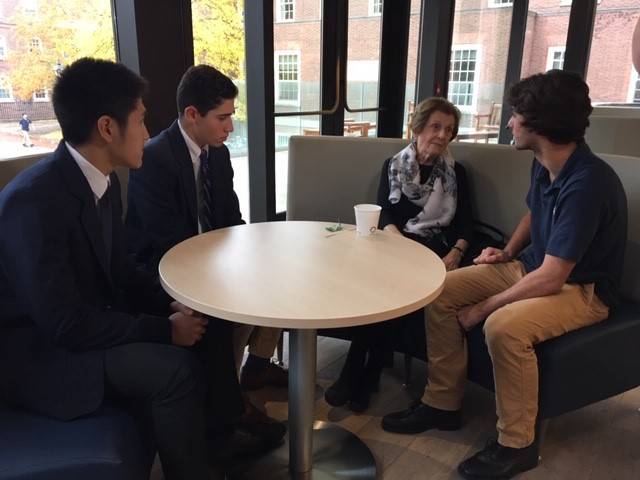 “The only way to survive is to get along and respect one another.”

In 1942, Schiff’s family was deported to Theresienstadt, a ghetto and concentration camp, where she was assigned to work in the hospital. Her parents, sister and grandmother died there.

During history’s darkest chapter, she tells the packed auditorium, she found love. Schiff met her future husband Arthur. The days were long, but Schiff kept going for her mother.

“If everybody and everything let her down, I will live up to what she expected, what she hoped I would become,” she said.

Decades have passed since the Holocaust, but still the memories for Schiff and for the other survivors who take part in Holocaust Education Week are difficult and traumatic.

But as Schiff explains, “If [the students] create a better world, then our efforts were invested.”

Jordan Weiss is among the students.

Another student, Phillip Kong, attended a trip UCC offers to students who want to further their Holocaust education.

“We went to many death camps such as Majdanek, Auschwitz-Birkenau… when you’re actually there, it’s a whole other experience,” he said.

The teacher who leads the trip, and interviewed Vera Schiff on Monday, is Rachel Metalin. She has completed extensive Holocaust education training in Poland.

“For students to learn about a tragedy that, is of course a Jewish tragedy, but it’s also a human tragedy, and when we can connect to the humanity of that it’s really the catalyst for change,” said Metalin.

She recalled a trip overseas and a moment with one particular student.

“He looked up at me with just a look of shock and sadness and innocence and said, ‘It all really happened didn’t it? They really did that to those people?’ And I said, ‘Yeah, yeah it did,” she said with tears in her eyes.

Metalin noted if she can open just one student’s eyes to the dangers of anti-Semitism, then it is all worth it.

Just over a week ago, 11 Jews were killed while worshipping at the Tree of Life synagogue in Pittsburgh. Law enforcement officials reported the gunman said he wanted to “kill all the Jews.” The suspect, Robert Bowers, has been indicted on 44 charges, including 11 counts of obstruction of the free exercise of religious belief and use of a firearm to commit murder during a crime of violence.

“It is very disappointing, it is frustrating and it is also a certain degree of fear that no matter what you do you don’t seem to be able to get the message across that violence breeds violence,” said Schiff.

Yet, she insisted, it is because of the Holocaust and because of the Pittsburgh massacre that she must keep sharing her story with future generations.

“To take the kids step by step and teach them that hate (and) intolerance is a non-viable option,” she said.

There are events across the GTA this week as part of the Neuberger’s annual signature program, Holocaust Education Week, which has recognized as a “best practice” in the field by the International Holocaust Remembrance Alliance. A big part of the program is first hand testimony by the remaining Holocaust survivors.