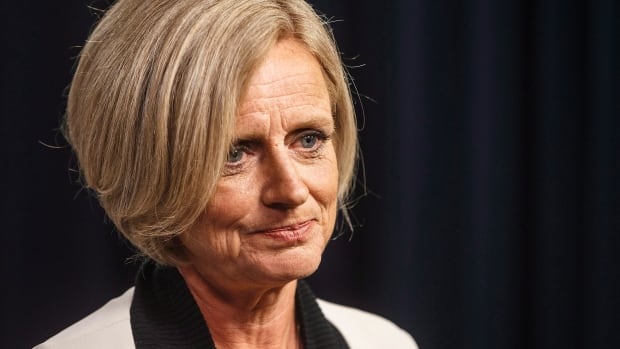 Despite stubborn opposition from the B.C. government, Rachel Notley believes she has already earned « majority support » for the Trans Mountain pipeline expansion.

« Reasonable-thinking people » are already convinced of the oilsands pipeline’s economic merits, she said.

« Some people are not ever going to agree, » Notley said in an interview Thursday, from Kamloops, B.C.

« But that doesn’t mean we should take the foot off the gas, and that’s why I’m here right now. »

After bringing her message about the economic importance of the Trans Mountain pipeline expansion to a steelworkers’ meeting in Kamloops, B.C. on Wednesday, Notley said her government will continue to campaign on the west coast.

The pipeline has faced stiff opposition from the B.C. government, some First Nations and environmental groups.

In August, the Federal Court of Appeal quashed the federal government’s approval of Trans Mountain. The court ruled more consultation with First Nations was needed, as well as more study on the effects of increased tanker traffic.

We have to to do the quintessential Canadian compromise.– Rachel Notley

As the National Energy Board launches a new environmental assessment , NDP MPs in B.C. once again, vowed to do everything they can to stop the TransMountain pipeline expansion project.

At a town hall on Sunday, Jenny Kwan, NDP MP for Vancouver East called the renewed consultations with Indigenous groups « absolutely a farce. »

With pipeline opponents digging in their heels, Notley seemed nonplussed. She remains confident the expansion will be constructed because it’s « in the best interest of our economy. ».

« Many, many Indigenous leaders in B.C. already believe that this project needs to happen. It’s not just Albertans, »Notley said in an interview with CBC Radio’s Edmonton AM.

« And, meanwhile I think that there will be very strong Indigenous consultations with very genuine, authentic efforts at accommodations but that does not mean outright veto for everybody.

« We have to to do the quintessential Canadian compromise. »

Notley noted that Alberta heavy oil producers have been dealing with a punishing price gap between their product and U.S. light oil — in the order of around US$40 to US$50 a barrel in recent weeks.

Analysts at the Royal Bank have proposed that Alberta correct the supply imbalance by giving  oil producers a temporary royalty payment holiday, in exchange for producing less oil.

In a report Monday, Royal Bank analyst Greg Pardy said Alberta oil is selling for multi-year discounts to U.S. benchmark prices due to a lack of export pipeline capacity and a lack of oil storage in Alberta.

Pardy argued Alberta has the agency to improve crude oil prices and reverse a royalty problem which is costing both producers and the province millions of dollars each day.

Notley dismissed the idea of market intervention and reiterated her pitch for expanded rail export.

She said moving oil on rail cars can be a stop-gap measure to help narrow the price discount and ensure Alberta oil producers can fetch a fair price.

« There is strong concern and we share the concern about the depth and breadth of that differential right now, Notley said. « I don’t know when it’s ever been this high.

« We are working very hard right now to come up with the best, most cost-effective way to help mitigate that differential at least in the short to medium term. »

Notley suggested the punishing price differential should contract when Enbridge to replaces its aging Line 3 crude oil pipeline which runs from from Hardisty, Alta, to Superior, Wisconsin.

If completed in mid-2019 as planned, it will boost oilsands export capacity by an estimated 375,000 barrels per day — over half of what the Trans Mountain Expansion would add.

With files from the Canadian Press