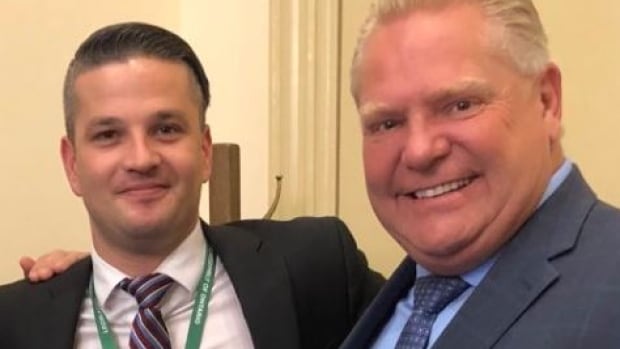 A former top staffer for Ontario Premier Doug Ford has admitted his conduct was « unacceptable » in a statement Thursday, and says « everyone has the right to live and work free from harassment. »

Coming forward for the first time since the news broke, Kimber said « I take full responsibility for my behaviour » and added he stepped down to « deal with these issues. » CBC News has not confirmed what the allegation against Kimber is and whether it’s true.

In a statement posted to Twitter on Thursday, Kimber said: « I’m sorry for those who I have hurt. I’m also sorry to my friends and colleagues in the Ford government and the disservice I brought to the office. »

When pressed by reporters to confirm Wednesday that Kimber left because of a sexual misconduct allegation, Ford did not dispute the claim and said « he lasted about a minute when we found out. »

Ford said his government has launched an investigation into the allegations against both Kimber and Wilson, telling reporters Wednesday: « I have zero tolerance for this behaviour. »

Wilson’s resignation was triggered when, according to three PC Party sources, a staffer made an allegation against Wilson of sexually inappropriate behaviour. CBC News has not confirmed whether the allegation is true and has been unable to reach Wilson for comment.

Initially, the premier’s office said nothing about the sexual misconduct allegation against Wilson. That information emerged on Monday after Ford reshuffled his cabinet behind closed doors. He later clarified that Wilson was forced to resign.

However, when asked Wednesday about the secrecy surrounding the departure of Wilson and Kimber, the premier said his government is protecting the people who came forward.

Ford said the people who made the allegations asked him repeatedly not to alert the media to the story.

« I commend them for coming forward and having that courage, » Ford said, adding that he’s respecting the request.

« They’re a priority. They trump the media. »