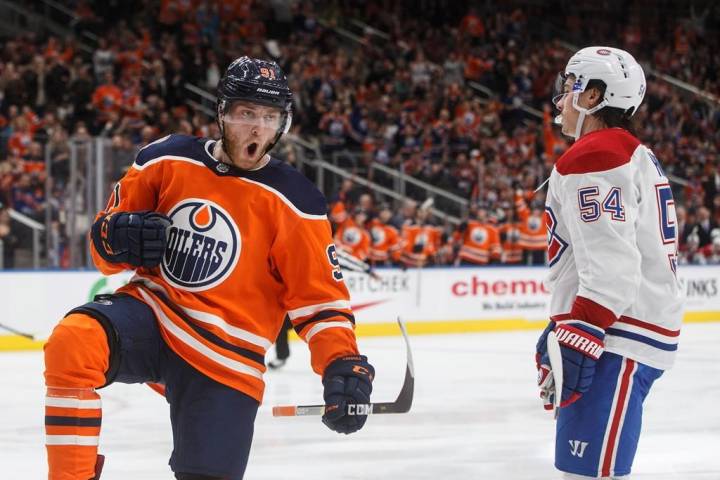 The Montreal Canadiens often find their sad truth during Canadian West Coast road trips. It’s been a graveyard of sadness for years and years. So far in 2018-2019, the Habs have surprised all the experts.

The biggest surprise of all would be success in Edmonton, Calgary and Vancouver this week. The Habs started in the Alberta capital with Antti Niemi getting the surprise start.

Max Domi is a star every night it seems. Domi has points in 13 of the last 14 games for the Habs as he continues his torrid scoring pace. He kept the points streak alive with a perfectly placed shot into the top corner early in the first period. That made it 10 goals on the season for Domi in 18 games. He had only nine goals in all 82 games last season in Phoenix. He’s also top 10 in league scoring. The last time the Habs had a point per game player was Alex Kovalev. What a revelation Domi is this season.

It is shocking how improved the centre position is this season compared to last. People speculate that the Habs will move Domi back to wing when Jesperi Kotkaniemi, Ryan Poehling and Phillip Danault are all ready to star at the same time. Not a chance.

When a player is infinitely better at centre than he is at wing, there is no possible way that he is going back to wing. When he is producing at a point-per-game, no possible way he moves back to a place he did not produce. The Habs are going to have four strong centres down the middle in the not-too-distant future. What a remarkable turnaround for this franchise!

The Habs’ No. 1 line continues to roll. What a stroke of brilliance putting Andrew Shaw with Domi and Jonathan Drouin. Shaw was languishing looking like he didn’t really belong anywhere anymore only two weeks ago. He gets lined up with the top forwards on the team and he has come alive with four goals in his last three games.

Drouin as well showing both passing and finish with 14 points in 18 games. Drouin’s best season is 53 points and he is also scoring at an elevated rate on pace for 64 points. The Habs coaches have long favoured switching lines every half-dozen games or so, but this one could last for a while. Especially because they had a player who was doing nothing in Shaw who suddenly is contributing in a big way.

Connor McDavid makes everyone look bad at one time or another, so it is expected that defenceman are going to find some difficulties in Edmonton. McDavid was flying down the right side and David Schlemko tried to time a hit against him but basically did a face plant against the boards instead while McDavid blew past him and set up Leon Draisaitl for the Oilers’ second goal of the night. You’re not going to stop McDavid by trying to keep pace with him while skating backwards, and you’re not going to stop him by trying to sandwich him against the boards. Basically, you’re not going to stop him. It’s just what scale of embarrassment he is going to cause for you. On a scale of one to 10, Schlemko suffered about a seven or eight. Normal really, against the most talented player in hockey.

Antti Niemi didn’t get a feel for the bounce off the backboards for the first goal off the back of his leg. He didn’t have a chance on the second goal on the McDavid to Draisaitl pass. The pass was lateral across the crease. It is such an obvious thing that when a goalie has to go east-west, it is so much harder than when he does not.

The Habs are leaving their goalies with so many extremely difficult east-west shots. They’re going to fail in that environment. So while the Habs’ goaltending is extremely suspect this season, the defence is just as suspect. Schlemko and Jordie Benn on your first pair are simply facing more talent than they can handle. Add to that, they are getting more ice time than they are used to so a mental fatigue sets in as well.

While many thought the Habs would not find goals this season, the truth is, offence is not an issue at all for the Habs. The defence is the issue. It’s just not good enough. It’s not a system issue, nor is it completely a goalie issue — it’s, in truth, a defencemen issue. The Habs have allowed four goals or more in seven of their last eight games. The club, to truly compete in the years to come, needs to get at least two strong defenders more talented than they have now.

Nicolas Deslauriers getting a contract was the only bad move by Marc Bergevin in the offseason. He isn’t good enough. He’s out of place. He’s got to go. Nikita Scherbak is dog housed and that’s a shame. He is dealing with an injury now, but the organization favouring Deslauriers over the talent of Scherbak since the beginning of the season says everything you need to know about how the club values a lunch bucket more than a paintbrush.

Deslauriers can’t provide a thing on offence, spends many shifts in his own end on defence. Sure he finishes his checks, but it is after the puck is long gone. The organization likes that “whole lot of nothing” more than Scherbak who can provide moments of excellence on offence and couldn’t possibly be hemmed in his own zone more than Deslauriers. There has to be something we do not know about on Scherbak, because what we do know that is on the surface does not add up to this type of sad treatment. Scherbak must play. The fourth line is a mess.

READ MORE: Call of the Wilde — Habs Got Goalied

Shea Weber is practising with the main team earlier than anticipated. It is expected that Weber is two weeks ahead of schedule. He won’t play on the west coast swing, but will continue to practice. He may be ready before the start of December. The first date given in July right after surgery was that he would return mid-December. This would be a huge boost for the club that has been without a first pair defender for the first quarter of the season. Adding Weber now, and a first pair defenceman on the left side in the future, is the most important element to the club becoming a long-term contender again in the Atlantic Division. Weber will also help the Habs’ woeful power play. He can’t come back soon enough.

Carey Price didn’t play in Edmonton on Tuesday night. He also didn’t play on the weekend against Vegas. It’s unusual for a No. 1 goalie to not play over a five-day stretch. Certainly, fatigue isn’t an issue early in the season. The next one is in Calgary on Thursday night, and it seems popular to let this oddity go for now as simply scheduling, but if he doesn’t play the next one, you can officially start to be concerned. It’s not as if the other goalie Niemi is hot and it’s simply a choice to go with the hot hand.

Both goalies are cold, but one is the apparent all-star, and the other was about three bad losses from the end of his hockey career last November. This season has been one of great promise for the future so far, but they’re going to need a goalie soon. There is no such thing as a playoff spot for a team with two goalies with 890 save percentages. This is not an exaggeration. It simply does not happen.