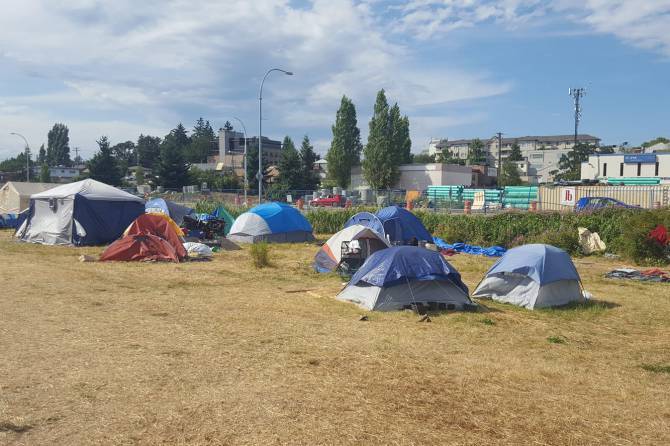 The encampment, known as Camp Namegans or Namegans Nation, originally set up in Saanich’s Regina Park back in April.

Since then, it has moved several times — first to a Ministry of Transportation and Infrastructure (MoTI) property next to Highway 17, then to Goldstream Provincial Park and finally to a piece of private property in the 5000 block of West Saanich Road.

The owner of the West Saanich Road property said he hadn’t given the campers permission, but one of his tenants had invited them and he didn’t know how to remove them.

Saanich police say the campers moved again to a new location, again on MoTI property, on Saturday. The new location is also adjacent to Highway 17 and directly behind the Saanich Fire Department.

Police said they had notified the ministry and will “provide them with support if/when requested,” according to a media release.

Police also said that because the camp is on provincial land, Saanich’s Parks Management and Control Bylaw, which allows overnight camping in Saanich parks from 7 p.m. to 9 a.m., does not apply.