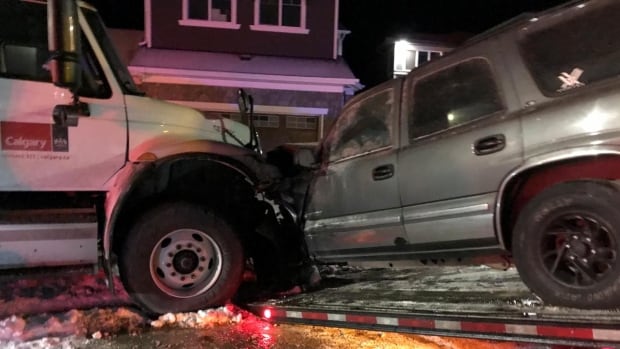 A dramatic video posted online shows a City of Calgary sanding truck as it plows into three vehicles, just minutes after a family of three had been sitting inside one.

The crash was caught on home security video and happened around 1 a.m. Monday in the southeast Calgary community of Legacy.

A city spokesperson confirmed a sanding truck hit the parked vehicles, and that the driver is an employee of the city and was uninjured.

Calgary Police and the city are investigating.

Josh Capps said he was asleep when his daughter woke him up to tell him there had been an collision outside their home.

« I looked out her window and saw the whole thing. It looked like vehicles everywhere, » he said.

Capps’ Chevy Tahoe — the first to be hit — had been totalled, as well as his friend’s Jeep and a neighbour’s Honda Civic.

« It was just completely destroyed, like the whole front end was smashed all the way up to the windshield. »

It wasn’t until he reviewed his home security footage that he realized just how close of a call the crash was.

Two friends and their one-year-old child had been sitting in the Jeep right behind Capps’ Tahoe. The video shows them in the vehicle just nine minutes before the crash, and Capps speculates it took them a few minutes to unload the baby and Christmas gifts from the car to come inside. 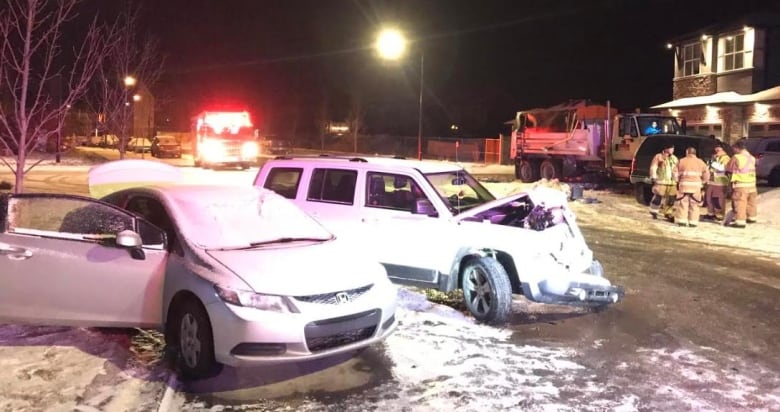 The driver of the sanding truck was stunned but unhurt, Josh Capps said. (Josh Capps)

« It’s quite miraculous … I mean, if they were to stop for gas or something, you never know, right? » he said. « The whole thing was basically counting our blessings that nothing bad really happened. »