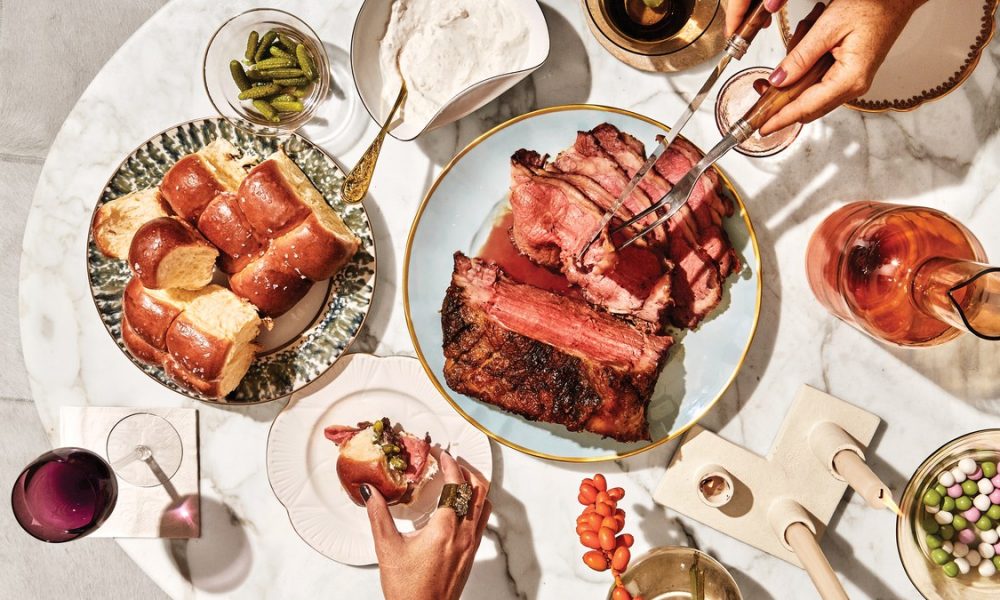 I remember feeling very confused as a child—most of the time, all of the time—but especially at the end of How the Grinch Stole Christmas!, when the Grinch turns his attitude around and serves every Who in Whoville a slice of “roast beast.” The cartoon roast looked delicious, with its browned edges and pink inside. But how would it feed all the Whos? I wondered. What is roast beast? I wondered. Then I dreamed, as little girls do, about a fat slice of roast beast being handed to me by a smug man with four furry fingers.

I assumed it was roast beef, for obvious reasons, but on closer inspection, it’s gotta be a ham or a roast goose. Food director Carla Lalli Music confirms the goose theories. Well that’s not gonna feed all the Whos in Whoville (a.k.a. the eight people I call my friends)! To recreate this scene properly, and to feed a crowd this holiday, the best meat for the job is really a huge hunk of roast beef. Specifically, this garlic-rosemary slow roast beef by Chris Morocco.

You start with a 4-lb. New York strip roast, which I picked up from a butcher who had the gall to charge me $130 for it. “But it’s Christmassss!” I said with a Cindy Lou pout. “No shit,” he replied with a bloody thwack to the cutting board. “Ok-ay.” I swiped that credit card.

The only thing elaborate about Chris’s recipe is the quality of that hunk of meat, the sheer size of the lad. The rest is pretty simple. A day before roasting, I seasoned it with salt and pep and rubbed it with a garlic-rosemary-oil mixture that made my kitchen smell incredible. The next day, the beast went into the oven at a mere 200° for almost three hours. Low and slow is the name of the game. During that time I made a nice salad dressing, bought some Martin’s potato buns, whipped up the horseradish sour cream, and read a novel’s worth of cheesecake recipe reviews by strangers on the internet, searching for truth. (I landed on Craig Claiborne’s, if you’re curious. It came out rich and dense; you could carve “David” from it.)

By the time the was beef was resting, my friends had arrived for cocktails and a little activity we call Lookit The Meat!, where you stand around the kitchen looking at that huge roast. Mingle mingle, kris and kringle, and then when it was about time to feast, I browned the roast in the biggest Dutch oven I own (Lodge’s 7.5 quart), a couple minutes per side.

DINNER TIME. Cue the Grinch-style slicing at the cutting board. Big knife, big grin, but thin slices, ideally. It was just like the cartoon, it has to be said: The beef was bright pink inside, and a general joy to behold, and the rosemary-garlic crust was deeply browned and crispy. Around the table, we loaded the sliced beef on soft buns with a slathering of horseradish cream, some mustard, and cornichons. Unlike Thanksgiving or other roast beast feasts, this isn’t a “pass the mashed potatoes, papa,” formal dinner. It’s a construction zone. Spoons stuck in mustard pots, rolls flying across the table. You get to be yourself. Load up the sandwich with four cornichons, sliced perfectly in half.

The luxury of the roast beef still makes it a special occasion, but a festive one. And you eat with your hands! There’s no other way. The assembly of a roast beef sandwich is like trimming your best friend’s show-offy 8-foot tree, or holding the rickety ladder as your awkward step-brother outlines the house in lights, or sloppily decorating sugar cookies with your 14 cousins. It’s about forced interaction with those you love—even if it gets a little messy sometimes. 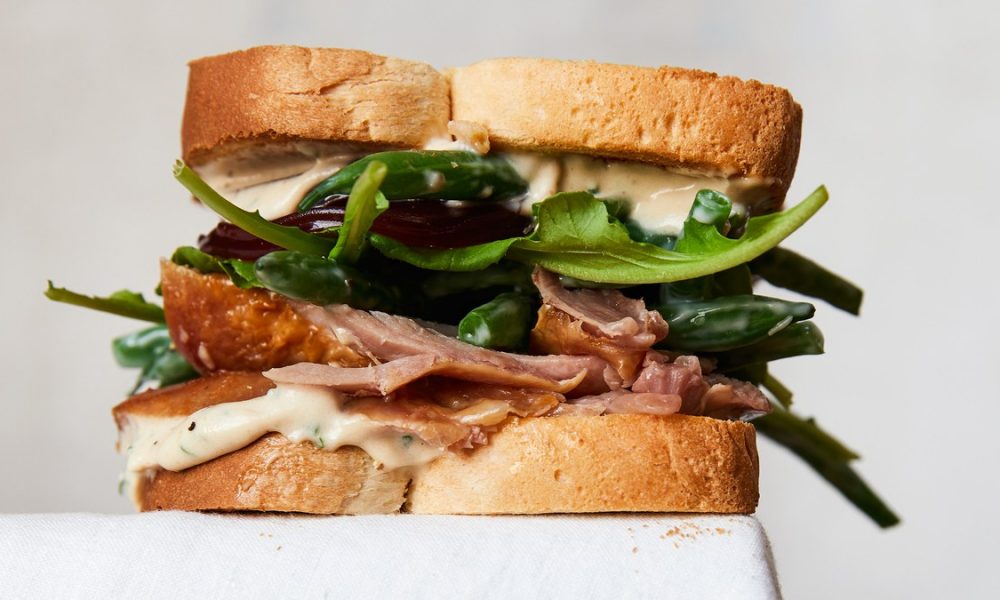 In the pantheon of sandwiches, those made from Thanksgiving leftovers reign supreme. (Sorry fried chicken sandwiches. I’ll always love you!) My family takes our next-day sandwiches so seriously, we put the turkey basting and pie decorating on pause to whip up a condiment for the next day. Yes, we prep for our leftovers, and no, we’re not crazy. We just know a turkey sandwich enhanced with green goddess dressing is worth it.

For the uninitiated, green goddess is a vibrant and garlicky dressing that (probably) originated in 1923 at the Palace Hotel in San Francisco. It combines a prodigious amounts of herbs like chives and parsley with salty anchovies and a creamy base, often mayonnaise and sour cream. The bright green hue suggests it is healthy. I assure you it is not. However, it is unquestionably delicious—and a recipe that’s been passed down in my family for at least three generations. (The food-spattered recipe cards suggest longer, but nobody can remember for sure.)

Once you acquire a taste for green goddess dressing you become insatiable, which is probably why a romaine salad drenched in the stuff became a staple on my family’s Thanksgiving dinner table years ago. One day, in a stroke of genius, someone added the extra dressing to their next-day leftovers sandwich. It was perfect! We collectively lost our minds.

Turkey has a nasty habit of drying out even when beautifully brined and roasted. Constructing a sandwich with cut up, day-old meat on crusty bread only worsens the dryness, which is why true sandwich heads know that it’s critical to introduce something creamy to keep things delicious. Ross and Monica had the Moistmaker—an unholy marriage of turkey and stuffing joined by a thick slice of gravy-soaked bread. I admire their boldness, but frankly, green goddess dressing is the only way to go.

The Moistmaker introduces wetness and doubles down on flavors already existing in the sandwich, but green goddess adds herbaceous creaminess and the perfect amount of tang, fortified with some anchovy funk. It elevates Thanksgiving leftovers into something truly special—but of course, no one in their right mind wants to cook (or do dishes) the day after Thanksgiving. That’s why it’s important to carve out a small section of Thanksgiving prep time to make the dressing. Use it in a salad if you like, but my family hasn’t made that romaine salad for years. We save all that beautiful dressing for the leftovers. It’s worth it. 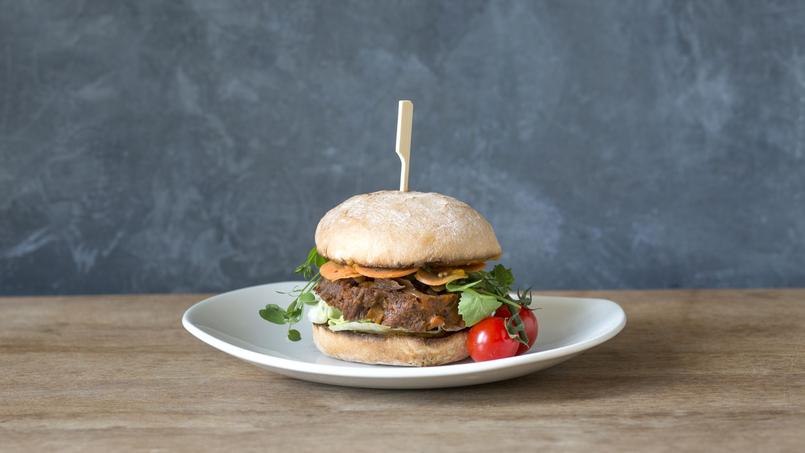