The Ontario government’s move to scrap controversial parts of the province’s sex-ed curriculum in no way violates the Constitution or anyone’s human rights, lawyers for the province will argue this week.

The government laid out its case in a 126-page legal document filed ahead of a hearing that begins Wednesday in Ontario Superior Court.

The Canadian Civil Liberties Association (CCLA) and the Elementary Teachers’ Federation of Ontario (ETFO) are both challenging the government’s move to scrap the health and physical education curriculum that was introduced in 2015 under the previous Liberal government of Kathleen Wynne. Ontario schools are now teaching from the previous curriculum, originally developed in the late 1990s.

The groups want the court to order the province to reinstate the 2015 curriculum, while the province wants the case dismissed.

The Progressive-Conservative government argues that its changes to sexual education relate to « educational policy and democratic decision-making, not constitutional law. »

« The Constitution of Canada does not entrench any particular elementary school curriculum, » says the government in its written arguments, known as a factum. « It does not prescribe the sexual health topics that must be taught, the level of detail with which they must be articulated, or the particular grades in which they must be introduced. » 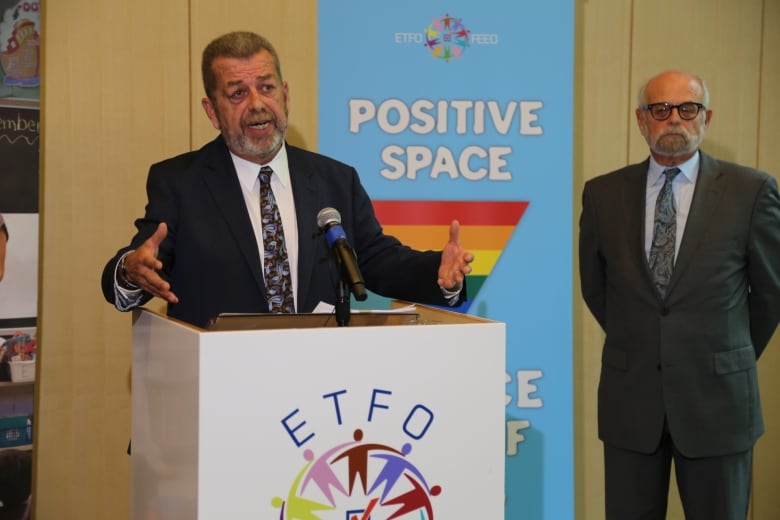 Sam Hammond, left, president of the Elementary Teachers’ Federation of Ontario, and lawyer Howard Goldblatt, right, outline the union’s plan to fight the government’s repeal of the 2015 curriculum. (Martin Trainor/CBC)

The province’s lawyers say the pre-2015 curriculum is not discriminatory, does not infringe on freedom of expression and does not deprive anyone of the key constitutional values of « life, liberty or security of the person. »

If Ontario was not violating the Charter of Rights and Freedoms before the 2015 curriculum was implemented, returning to that curriculum now cannot be unconstitutional, the province argues.

ETFO’s written arguments say that Ontario children are being exposed to a greater risk of harm by reverting to the previous curriculum. The teachers’ union says the sexual education being taught now is « based on a document created prior to the advent of social media, same-sex marriage, and human rights protections for gender identity, to say nothing of contemporary understandings of consent. »

CCLA’s written arguments say the government’s move « stigmatizes, degrades, and alienates » LGBT students and parents because references to sexual orientation, gender identity and same-sex relationships have been deleted from the curriculum.

The government counters that teachers are required to deliver the current curriculum « in an inclusive way » and « in a way that reflects diversity. »

« A curriculum is not a script for teachers to recite, or a list of mandatory or prohibited words, » says the province’s legal filing. « The fact that the words ‘gender identity’ do not specifically appear in the 2018 learning expectations does not mean that teachers may not teach about this topic. » 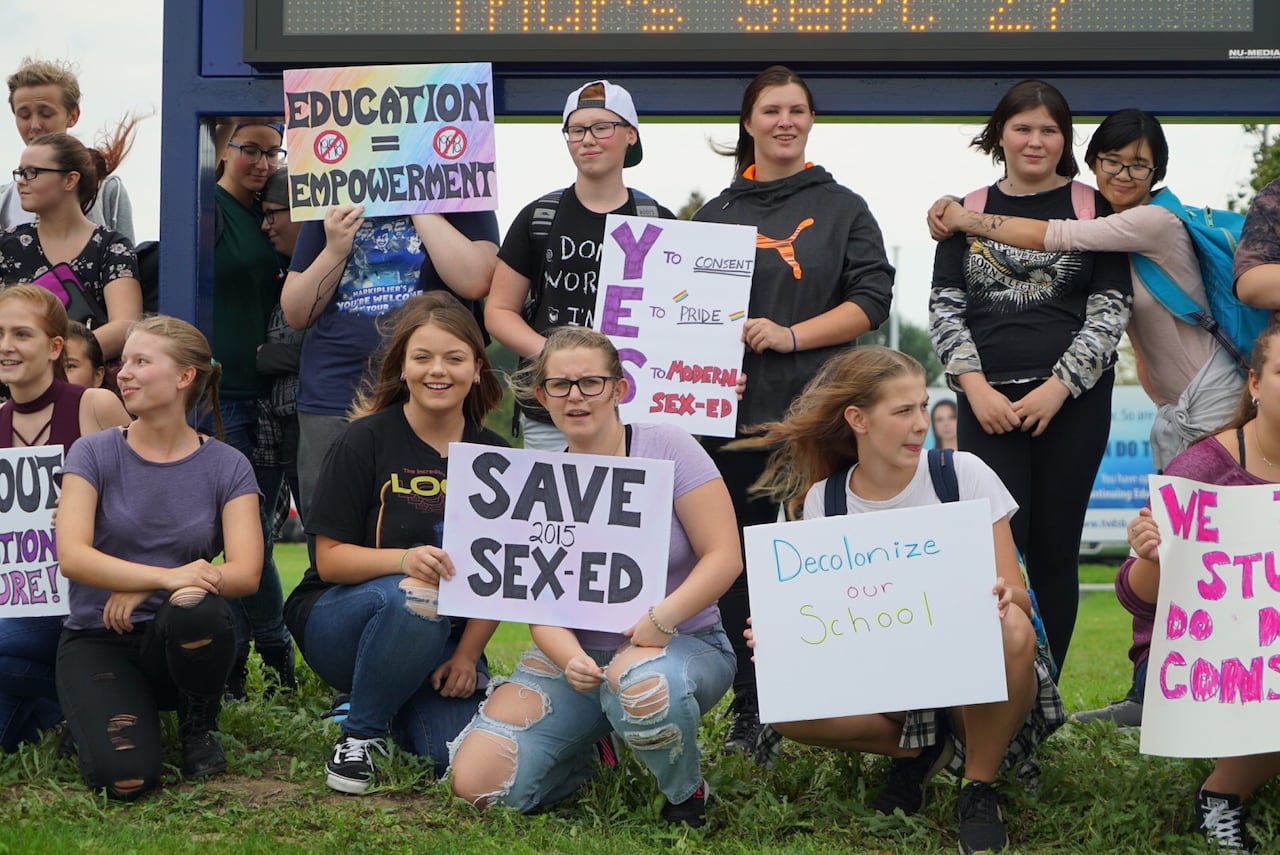 Students at Strathroy District Collegiate Institute joined their peers across Ontario when they walked out of school last September to protest changes to the curriculum. (Colin Butler/ CBC News)

The curriculum that was introduced by Wynne’s government was greeted with strong enthusiasm by sexual health educators and progressive groups, but with fervent protest from social conservatives and religious groups. Its opponents claimed the curriculum introduced topics such as gender identity and body parts at too early an age.

Shortly after taking office last summer, Premier Doug Ford announced that Ontario would revert to the older sex-ed curriculum for the 2018-19 school year. He had campaigned on a promise to scrap the 2015 version.

We’re also going to respect parents. That’s why we will scrap Kathleen Wynne’s ideological sex-ed curriculum and replace it with one that is age-appropriate, and only after real consultation with parents occurs.

His government recently wrapped up a province-wide consultation on school reforms that received some 72,000 submissions. Online submissions on the first day of the consultation indicated widespread support for the 2015 curriculum.

Ford said in December that « certain groups » flooded the website on its launch and may have skewed the results, but he didn’t name the groups.

The government’s legal argument says the consultation that resulted in the 2015 curriculum was far too limited to reflect the full range of public opinion. 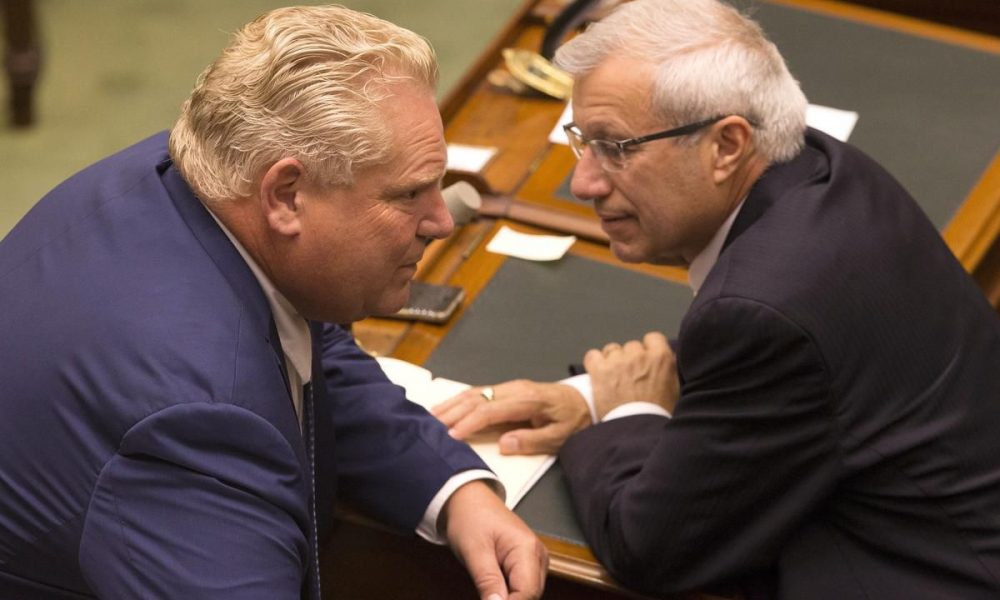 The Campaign Research survey found Ford’s Progressive Conservatives, who won the June 7 election with 40.5 per cent of the vote, have dropped to 34 per cent.

That compared to 32 per cent for the Liberals under interim leader John Fraser, 25 per cent for Andrea Horwath’s New Democrats, and 7 per cent for Mike Schreiner’s Green.

Last spring, the Liberals, then led by former premier Kathleen Wynne, garnered 19.6 per cent of the vote while the NDP received 33.6 per cent and the Greens had 4.6 per cent.

“It could be a little bit that the honeymoon is over,” Campaign Research CEO Eli Yufest said Tuesday

“The electorate … wanted to send the Liberals a message and they’ve done so,” he added, noting Wynne’s low personal standing “sunk” popular Liberal initiatives like improved workplace protections and a higher minimum wage.

Indeed, 77 per cent of Ontarians oppose the premier’s decision to scrap two paid sick leave days while 17 per cent favoured that and 6 per cent were unsure.

About half of those polled — 52 per cent — were opposed to Ford stopping a planned increase of the minimum wage to $15 on Jan. 1.

Instead it will remain frozen at $14 until October 2020, when it will be tied to the inflation rate and likely rise by about 25 cents an hour per year.

The freeze was backed by 42 per cent of respondents and 6 per cent were unsure.

Using an online panel of 1,830 Ontario voters, the Campaign Research poll was conducted between last Tuesday and Friday. A probability sample of that size would have a margin of error of plus or minus 2.3 percentage points, 19 times out of 20.

In terms of personal popularity, Ford has a 37 per cent approval rating with 63 per cent disapproval.

Campaign Research also found that 56 per cent oppose Ford ending the guarantee to workers of three hours pay if a scheduled shift is changed within 48 hours while 34 per cent support his decision and 11 per cent weren’t sure.

Similarly, 59 per cent are against the Tories’ scrapping of Employer Standards Act provisions that guarantee part-time workers the same pay for doing the same job as full-time employees while 33 per cent support the change and 9 per cent weren’t sure.

And 55 per cent oppose allowing employers to ask for a doctor’s note from workers taking sick days with 39 per cent supportive and 6 per cent unsure.