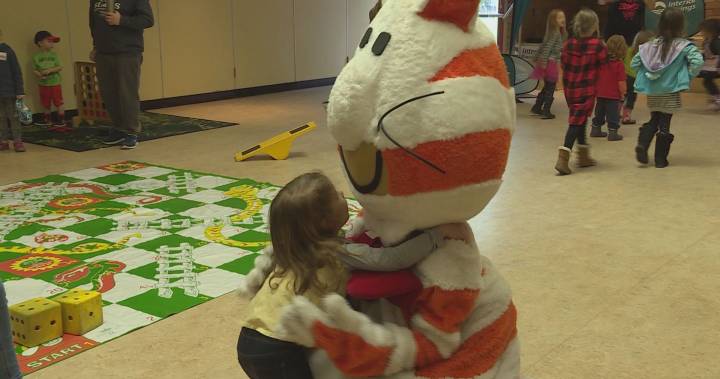 From bouncy castles to face painting, arts, crafts and games, it was all about unplugging from those time-consuming electronics and plugging into fun at the Parkinson Recreation Centre in Kelowna.

The event, held Sunday, was the kickoff party for Unplug and Play Week, an annual event sponsored by Interior Savings.

“Unplug and Play is a week of bringing families out to participate in the community, connecting together and turning off their screens to have fun,” said Amanda Turner, early years community developer for Central Okanagan Early Years Partnership.

“When families are turning towards their screens, they’re really turning away from each other,” Turner said. “So making sure that you have face to face time together, with neighbours, in the community, is really important for children to be physical, to be creative, to learn about their world and develop.”

This party is the kick-off event to a week of activities across the valley, including everything from unicorn parties to spaghetti dinners.

“The idea around Unplug and Play Week is really to highlight all the things that are always going on in our communities like skating at Stuart Park, doing activities at the library, going down and checking out the museum,” Turner said. “So take this week to look into what is always happening in our community.”

Turner added that studies indicate too much screen time can make it harder for kids to get quality sleep and pay attention. It can also increase risk of weight gain, anxiety and even depression.

At the kick-off party there were some conflicting opinions about what activities were the most fun.

Many kids mentioned the bouncy castles, the beanbag toss and dancing as fun activities.

But there was nothing more popular than the appearance of the Fat Cat, who hugged and high-fived children of all ages all morning and afternoon.

One thing was clear — no one seemed to miss their iPads or televisions or phones.

If you’re wondering what’s too much screen time, the Canadian Pediatric Society has some recommendations.

“[For] children under the age of two [it’s] really no screen time at all, because there’s so much brain development happening,” Turner said. “Children between the ages of two and five limit to an hour a day. Anything over the age of five should be limited to less than two hours per day.”

This coming week will be filled with over 80 events, from Lake Country all the way to Peachland, so you may just need to sneak a bit of screen time to check the Unplug and Play Week website for a schedule of events.