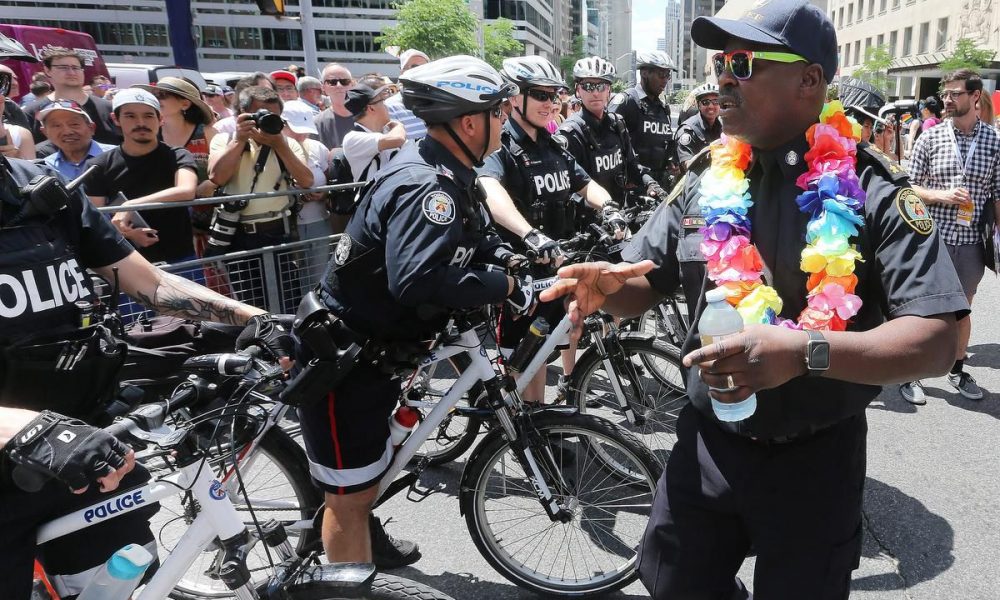 Cops: Gay Pride is just not that into you.

The rainbow flag doesn’t include a swath of blue — or black and white actually, which are the colours of the Toronto Police Service uniform. These are uniforms-non-grata for the Pride Parade, as determined by a razor thin 163-161 Pride Toronto membership vote on Tuesday.

No uniforms for the parade, certainly no cop float or cruisers, thus no inclusive police presence at this summer’s 39th annual parade, so three annual parades in a row excluding officers — gay or straight or whatever — unless they participate in civvies. The moratorium is binding for two years, according to a pre-vote email circulated by Pride Toronto.

Controversy swirled around the vote, with allegations that 244 names were added to the membership roll within 48 hours preceding the special general meeting, almost doubling the numbers. As well, some expressed concern about the transparency, for those unable to attend, of an online voting format that had never been used before.

All of this in advance of next Tuesday’s annual general meeting to elect three new board members and closed to the media.

Going on three years now — since Black Lives Matter halted the 2016 parade — that a celebratory event which brings immense prestige to the city has been embroiled in divisive politics and flaring emotion.

I am sympathetic to members of the LGBTQ community who don’t want their space invaded by cops. There are compelling historical reasons for distrust. And, in more recent history, apprehensions were further entrenched by a shambolic investigation of serial murderer preying on men in the Gay Village, alarm bells raised that rang and rang and rang, from within the neighbourhood, before police doubled down on their probe of men who had gone missing and an arrest was finally made, mere weeks after Chief Mark Saunders assured there was no serial killer out there.

If I was gay and I had a vote, it would be: No. A purely gut response.

But I am straight and my non-vote would be: Yes.

Because the parade is in financial peril. Because the parade, hosted by the Gay Village, is an otherwise open invitation to the city. Because attendance was so obviously in decline in 2018, doubtless in part because the gay community was still grieving over its losses, but also, I would argue, due to a public backlash against Pride Toronto. The organization’s audit for 2018 claims attendance for Pride Festival events was up, to 2.6 million. My eyes do not believe it.

Nor, for one moment, do I believe that any gay individual would feel “unsafe” in the parade presence of uniformed officers, particularly since officers will be there anyway on professional duty. It’s what the uniform represents that raises hackles. A contact flinch. An undercurrent of bitterness. A toxic dislike that may be justifiable and certainly not exclusive to the gay community.

It seemed, as recently as October, that the wrangle had been resolved or was at least headed toward peacemaking. Olivia Nuameh, Pride’s executive director, hit all the conciliatory grace notes in announcing, with Saunders at her side, that the board would welcome an application from Toronto police to march in 2019.

What was the purpose of that announcement, widely well-received, when the board apparently misread the tenor of its membership? Nuameh — who didn’t return a call from the Star on Friday — had been made to look inept and Saunders a supplicating fool.

Behind-the-scenes outreach between police liaison officers, the mayor’s office and Pride Toronto have been wrecked by what is essentially a small rump of the gay dissident faction with no explanation for why Pride even held a narrow one-question vote with so small a pivotal forum: “Should the Toronto Police Service be permitted to participate in Pride Toronto’s Festival Weekend, Parade and Streetfair, to include their uniforms and vehicles?”

Not that Pride Toronto was necessary driven by reconciliatory motivation. The organization is tangled up in debt, $700,00 in the red, with an operating deficit of $250,000 last year, its temporary lifeline a $300,000 line of credit.

Even with a drop in sponsorship revenue, this is difficult to reckon for an event that pours revenue into the city’s coffers: As per the economic impact section of the auditor’s report, posted online, the Pride Festival contributed an estimated $681 million to Ontario’s GDP, supported 5,000 direct jobs, and generated $270 million in combined federal, provincial and municipal tax revenues. Attendees spent $305 million in Pride-related purchases over Parade weekend alone and $379 million during Pride Month.

The imbalance is puzzling, as are the stark financial projections for 2019, despite cost-cutting undertakings that will see the number of stages reduced from 14 to three and ticketed events increased from four to 10.

A confidential backgrounder to Tuesday’s vote, sent to members and obtained by NOW Magazine, observes that the police disinvitation — coupled with a “significant internal reorganization” — accounted for a gap in corporate and public funding that “has had long term impacts on the financial health of our organization, the main one being mounting debt.”

Minutes of Pride Toronto’s Oct. 15, 2018 board meeting, also obtained via NOW digging, suggest funding problems faced by the organization prompted the decision to beckon police back into the Pride fold. The minutes state that Pride is at risk of becoming intolerably insolvent and the organization was relying on “funding focused on facilitating ongoing dialogue to try to ease tensions between the LGBTQ2+ community and police” to stay afloat.

Some, fed up with the whole shemozzle, have been advocating for all levels of government to pull Pride funding should the police ban not be reversed. This would be as wrong-headed as the ban itself.

About five per cent of Canadians identify as lesbian, gay, bisexual or transgender. That’s some 140,000 in Toronto, although obviously the numbers would skew higher for an urban metropolis with such a vivid gay community.

The city is blessed by Gay Pride cha-ching. I see no point in exacting vengeance from the community — and Toronto — by crippling the event fiscally.

But the anti-popo gospel, invoked by an antagonistic wee minority, is misanthropic and mutilating for a grand event beloved by all.