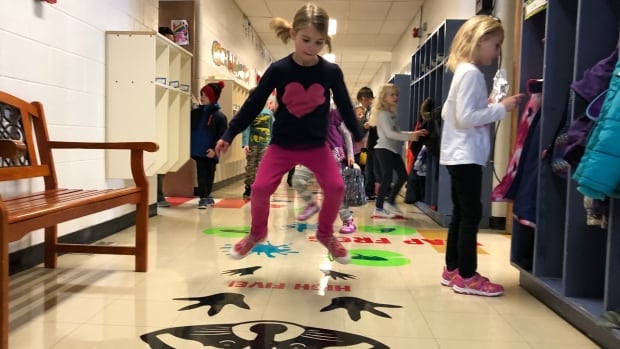 In many Canadian schools, recess and phys-ed class may be the only activity students get in their day, but a school in rural Manitoba is trying to change that.

« This is our Sensory Path, » says Roland School principal Brandy Chevalier, as she points to a colourful activity map on the floor of the school’s main corridor.

« We are very focused on making sure our kids are learning both numeracy and literacy but also being mindful of their whole bodies and wellness, and wellness as a whole being. »

The path instructs them to hop, squat, do pushups and crawl.

They follow the path every morning and after lunch, on their way to class in this community about 100 kilometres southwest of Winnipeg.

If teachers notice students fidgeting, they will send them to the path for a couple of rounds.

« Really helps me calm down when I’m in a very active position … It’s just helps me burn some energy, » Caleb says, adding his favourite activity is the frog jump. 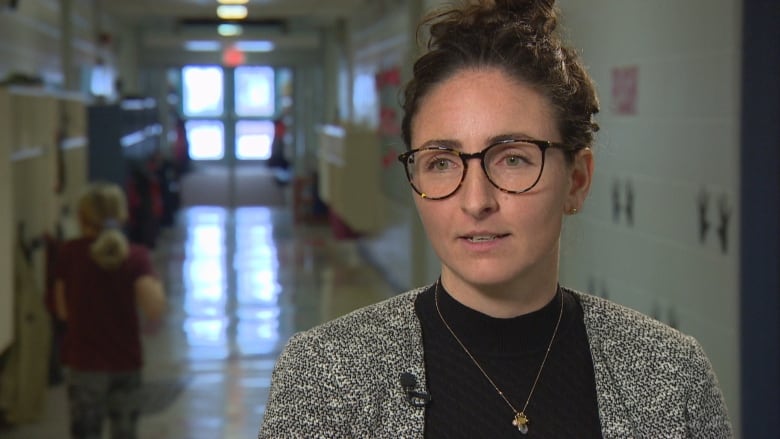 Principal Brandy Chevalier and her staff created a Sensory Path for students in the main hallway. She says more schools are developing a strong physical literacy focus. (Trevor Brine/CBC)

Roland School’s Sensory Path is the first of its kind in Manitoba, Chevalier says. It was inspired by an Alberta initiative called Don’t Walk in the Hallway, launched in 2015.

Chevalier says she’s been approached by schools across Canada since her school installed the path in November.

Her students’ comments are music to her ears.

She explains how this helps the students. « They feel like they burned some energy. They feel ready to sit down and to get down to work. They can focus a little bit better. »

She hopes such exercise can become « a preventative measure for some behaviour issues that might happen by a child who cannot regulate themselves to sit in class. »

The benefits aren’t just academic. Doing exercises like this every day increases physical competence, which boosts confidence, making people more likely to move and be active.

That has health, social, environmental, and economic benefits.

But Canadians are just not moving enough. We got a C– in a recent study of activity levels in 49 countries.

It’s not how much you move. It’s not whether you’re fit or not. It’s do you have the ability to move on land, air, ice, snow, water?– Dean Kriellaars , University of Manitoba

According to Health Canada:

« There’s two returns on investment here, » says Dean Kriellaars, with the department of physical therapy at the University of Manitoba. He has practised, researched and taught physical literacy for more than a decade.

« First is the health-related equity that happens if you increase they physical literacy of the population. And then safety and activity levels, you then get dramatic reductions in costs. »

In 2013, the World Health Organization estimated the global cost of physical inactivity was approximately $54 billion US in direct health care, plus another $14 billion in lost productivity.

It accounts for up to three per cent of national health-care costs, and that doesn’t include mental health and disorders such as repetitive strain injury, carpal tunnel syndrome and tendinitis.

More than 40 non-communicable diseases including breast cancer, Type 2 diabetes and strokes can be related to what Kriellaars describes as a global physical inactivity epidemic.

« Our society has to change. Our valuing of movement has to change, in our workplace, in our schools, where movement will be as important as reading and writing, » he says.

« Physical literacy has a physical component, a social component and a psychological component. It’s really about creating that holistic picture of a child and saying we need all three of those working together. » 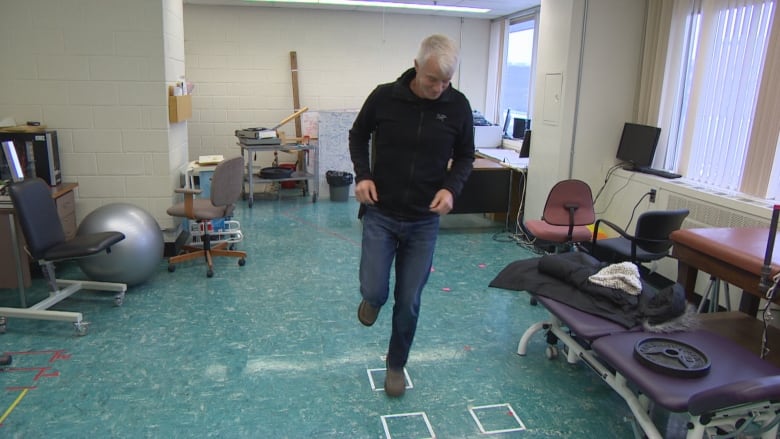 Exercise physiologist Dean Kriellaars hops in one of his movement labs at the University of Manitoba. He trains athletes of all ability levels, educates health-care professionals, coaches, trainers, and educators about physical literacy and healthy lifestyles. (Trevor Brine/CBC)

Chevalier sees a strong future for mpvement programs in schools. « I think a lot of schools are embracing opportunity for choice in seating in the classrooms, and this just directly complements that concept. »

Her advice for education profesionals? 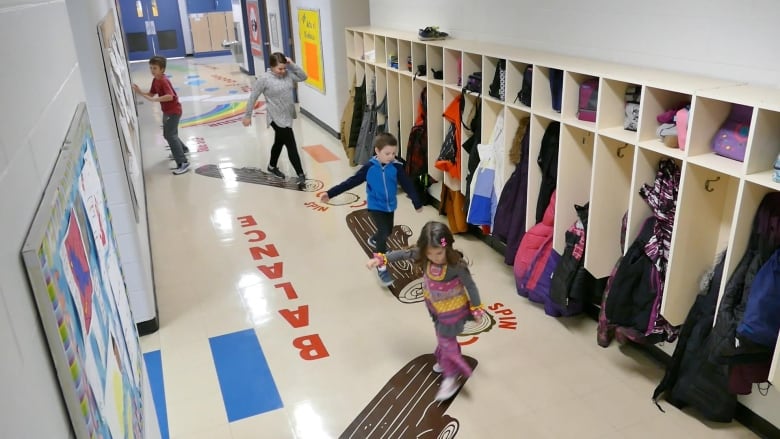