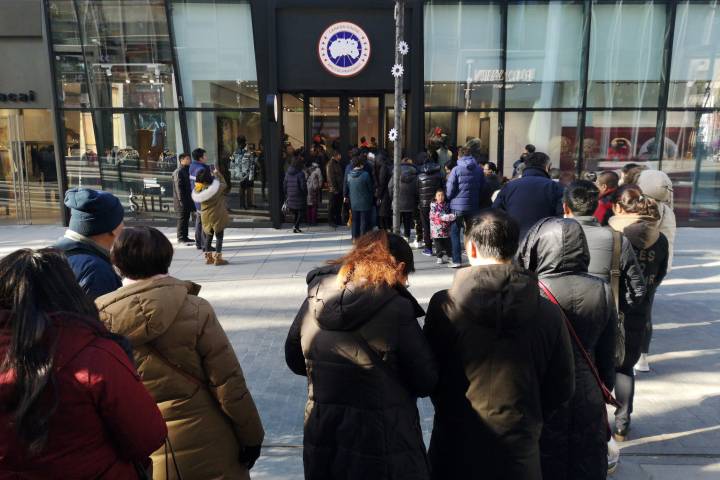 Large crowds have flocked to Canada Goose’s new outdoor wear store in downtown Beijing, its first in mainland China, since its opening on Friday, despite sub-freezing temperatures and a chill in bilateral ties.

A long line of shoppers swaddled in thick winter coats were queuing outside the two-storey store on Monday afternoon, with waiting times for a quick peek at Canada Goose’s 9,000 yuan ($1,300) parkas requiring an hour or more.

Canada Goose staff were seen walking up and down the queue asking shoppers which product they were after and then telling them whether or not they had that in stock.

Ties between China and Canada have turned frosty since the arrest of a top Chinese executive in Vancouver at the request of the United States in December and the subsequent arrest of two Canadians on suspicion of endangering state security.

Canada Goose opened its Beijing store about two weeks later than initially planned. It has made no connection between the delay and the heightened tensions between the two governments, saying earlier this month that the postponement was due to construction work.

On Monday, construction workers were still seen on scaffolding in a cordoned-off area on one side of the store.

The Toronto-listed parka maker has made no mention of the Beijing store opening on its Chinese social media platforms, although the store in Beijing’s swanky Sanlitun district is now listed on the company’s global website.

“We are proud of our newest store in China and look forward to welcoming our fans,” Canada Goose said in an email to Reuters on Monday.

“It’s been popular for ages but Beijing didn’t have one, only Hong Kong. So everyone’s come to see it,” said Long Hua, 32, lining up outside the store door with a friend.

How tension between Canada and China will impact Canadians

Shares of Canada Goose have fallen about 37 percent in Toronto trading since Meng’s detention and the ensuing strains between the two countries.

Meng has said she is innocent.

The stakes are high for the maker of high-end goose-down coats, which enjoy significant brand recognition in China’s big cities.

Chinese customers account for more than a third of spending on luxury products worldwide, and are increasingly shopping in their home market rather than on overseas trips.