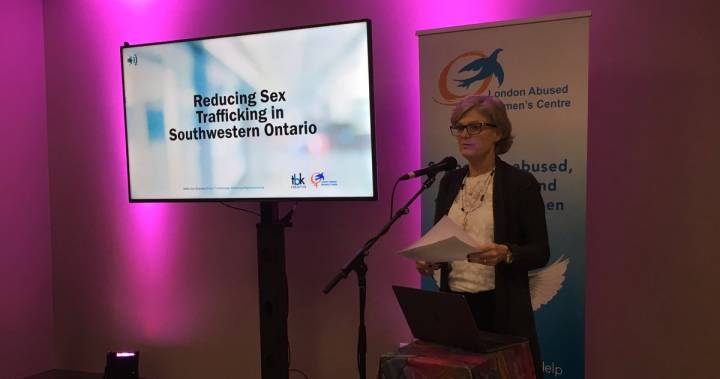 Following the success of last year’s online advertising campaign with tbk Creative, the London Abused Women’s Centre (LAWC) has launched a new campaign in a total of 10 Ontario communities.

Thanks to $103,000 from the Department of Justice in an effort to combat sex trafficking, the campaign has already started rolling out tailored advertisements on social-media sites like Facebook and Instagram.

“We all have a responsibility to address what we now know as a crisis,” said LAWC executive director Megan Walker at a news conference on Wednesday morning.

“London is a major hub for sex trafficking, and men have great desire to rape and sexually assault underage girls, and in fact, they will pay more to do so.”

The previous campaign involved ads on social-media sites tailored to at-risk women and girls, as well as potential sex purchasers.

The Facebook ad targeting men advertised about the consequences of buying sex, while the ad targeting women communicated how those in an abusive, unsafe, or exploitative relationships could find help leaving those partnerships.

This time around, the campaign also involves ads tailored to parents, warning of the potential signs of exploitation and directing to a new landing page with resources and information.

“In our community, we are losing girls every day from post-secondary institutions, from their workplaces, and from bars, who are being picked up by traffickers and turned out rather quickly into the horrific world of sex trafficking.”

The campaign launched on Jan. 18 and runs through to May 18.

In addition to London, the campaign is also underway in Windsor, Woodstock, Kitchener-Waterloo, Cambridge, Guelph, Milton, Mississauga, and Toronto.

— With files from 980 CFPL’s Liny Lamberink and Matthew Trevithick