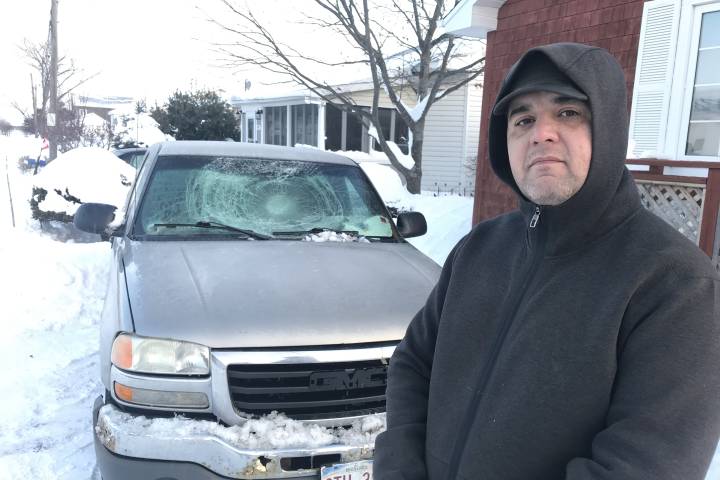 Donald Gallant was on his morning commute to work when snow came crashing down from the overpass above, shattering his windshield.

He claims a provincially-owned snow plow travelling ahead of him on the Harrisville Boulevard overpass is what did the damage.

“As I saw him coming, I could see the snow starting to come over the edge,” says Gallant.

“I’ve never been so scared in my life. I was covered from head to toe,” he added. “My seat is still covered in glass.”

READ MORE: Bundle up: Snow on the way to southern, eastern New Brunswick through Monday

Gallant says if he hit the brakes, he would have been rear-ended by a transport truck following him

Gallant says that when he saw the plow, he knew he had a tough decision to make — to hit the brakes or take the impact of the snow.

“There was no way I could slow down,” says Gallant. “I had a transport truck I just picked up off (Route 2) behind me, and I had a car passing me on my other side.”

Jeremy Trevors, a spokesperson for the Department of Transportation and Infrastructure, confirmed to Global News they’re aware of the incident and are investigating.

Gallant says if the plow driver was travelling slower, and the barrier was built higher, the incident could have been avoided

Following the incident, Gallant tried to file an insurance claim at the provincial Department of Transportation and Infrastructure office in Moncton.

“I got passed a piece of paper which was a claim sheet,” he says. “I had a lady talk to me for about two minutes to tell me that my claim wouldn’t be processed for another four to six weeks.”

“I was a little upset, I was scared, I was terrified. I had just almost been killed by falling snow off a truck.”

An attempt with his own insurance company was also unsuccessful.

“[I] tried to go through insurance, but due to PLPD, they can’t cover me on my end,” he says. “But again, that shouldn’t be covered on my end. That should be covered by the government.”

“You need to take into account all kinds of hazards that are out there compared to other seasons in the year,” says Sgt. Mario Maillet of Southeast District RCMP.

Gallant says if the plow driver was going slower and the barrier was built higher, the issue could have been avoided.