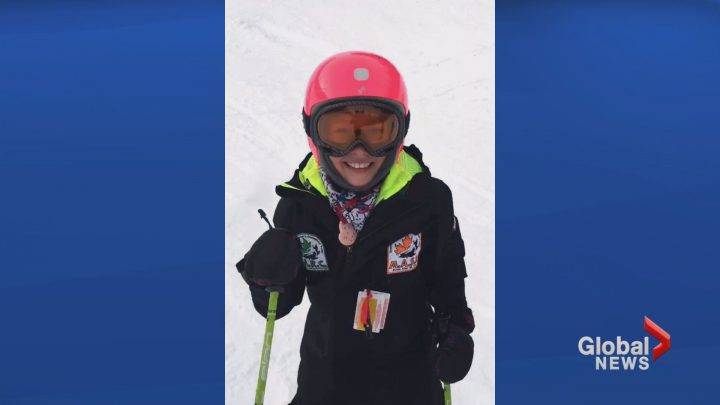 For David Wunsch, coming back to the ski hill where his nine-year-old daughter died never gets any easier.

“It’s difficult at times, but we get here and we know that Abby and her spirit [are] fully entrenched in the ski hill. It’s a place where I can connect with her and know that she’s around and with us here,” said Wunsch at Nakiska Ski Area on Sunday.

Abby Wunsch was on the U10 Race Club at Nakiska. She loved to ski.

“She was always smiling,” said her teammate, Natalee Tulloch. “She was a fun and happy girl, and when you were sad she would always be there to help cheer you up.”

In December 2015, Abby was skiing with her team on a green run she had done countless times before. But this time, she hit a tree.

“She didn’t lose control,” Wunsch recalled. “There was a young witness who saw her. She wasn’t skiing out of her element. It wasn’t anything out of the ordinary. Right away, there were ski coaches and patrols on scene and were able to help her within minutes. Unfortunately, the injuries were too great.”

Abby’s parents weren’t sure if they could ever return to the mountains again, but it was her little brother who encouraged them.

“Right after it happened, Isaac said to us: ‘We’ll take a couple of weeks off but then we will go back skiing.’ He really led us. I didn’t know at the time if we could ever ski again or even come back to the ski hill but he led us, and for such a young person to help us, we just went with it, and it’s good because the support we’ve had from Nakiska and the ski community, I think it helped us tremendously in our grief,” Wunsch said.

He added that he and his wife, Jessie, made the decision together to continue with Abby’s brother’s ski team.

“The incident was part of the sport, and we understand that. Life sometimes has inherent risks so I don’t think we can go around being bubble-wrapped and stopping living for the risk that something may happen,” Wunsch said.

The Wunsch family has now set up the Abby Award in memory of their daughter. Seventy-eight medals were given out in 2017 to young skiers across Canada who demonstrated Abby’s attributes, such as effort, passion and an ability to have fun.

Parents and coaches call the family an inspiration to their community.

“I admire them because going through such a tragedy and to turn it into such a positive thing is amazing to me,” said Kim Blouin, whose daughter received an Abby Award.

“This award is special because there’s all kinds of other medals for performance, but this is about attitude and work ethic and passion and showing up and being there 100 per cent of the time.”

Thoughts of Abby remain as teammates ski down the run where they lost their friend three years ago.

“I always think of her every time I go down that run,” said Tulloch, also an Abby Award recipient. “I don’t feel sad. I feel happy and grateful that I got to know her.”

Abby’s racing jacket now hangs on the wall at the Nakiska Lodge. Olympic athletes like Brady Leman and Kerrin Lee-Gartner, teammates and first responders who were at the scene of the accident wear the Abby Badge in her memory.

The award now helps all those grieving to find some peace.

“Setting up the award really brought out what Abby was about,” said Wunsch. “It helped us to honour her and helped us in our grief. It helped a lot of other people that were with us in our grief. It helps us remember all the great things about Abby and it helps us be positive for those other athletes out there and not dwell on the fact we don’t see her every day and that we will one day.”