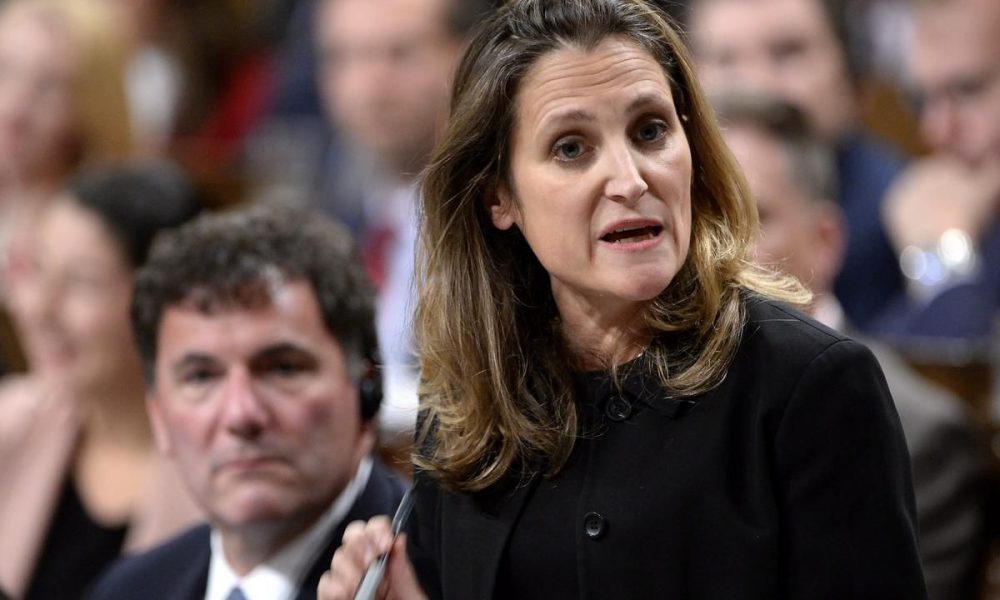 Ottawa has slapped down complaints from Queen’s Park about Canada’s new trade deal with the U.S. and Mexico in a politically charged exchange.

Ontario continued its push Wednesday for the federal government to detail compensation arrangements for dairy farmers when the Canadian market is opened to more American milk products under USMCA, the replacement for the North American Free Trade Agreement. In a letter sent Wednesday, Ontario Trade Minister Jim Wilson also raised a number of other concerns including about U.S. tariffs and Canada’s ability to control its future trade deals.

The United States-Mexico-Canada Agreement was signed Sunday night after 13 months of tense, high-stakes negotiations punctuated by threats from U.S. President Donald Trump, who claimed Canada enjoyed unfair advantages under NAFTA. The deal must still be ratified by the three nations.

“Our government remains concerned about the impacts of increasing access to Ontario’s dairy market, the remaining steel and aluminum tariffs, and Clause 32 which permits the U.S. to veto future Canadian trade deals with other nations,” the Progressive Conservative wrote.

Freeland’s response said opening the dairy sector to more U.S. goods through the USMCA is in line with what the previous Stephen Harper government agreed to in the original Trans Pacific Partnership trade deal with Asian countries.

“Changes to the dairy sector are comparable to changes negotiated by the Conservatives in the original TPP,” she wrote of new provisions that will open up just over 3 per cent of the market to American products.

“We will fully and fairly compensate the supply management sector and dairy farmers. The government is establishing a working group, in partnership with the dairy industry, to ensure its vitality long into the future. We will be in contact with Ontario about this process.”

Freeland suggested Ontario and other provinces had already been given this information.

“I was pleased to meet you and Premier Ford on Sept. 19 in Washington where we discussed many of the issues in your letter,” she added.

Freeland’s mid-afternoon reply defended the deal more broadly, saying it “safeguards more than $2 billion a day in cross-border trade and tariff-free access for more than 70 per cent of Canadian exports,” particularly the auto industry that is crucial to Ontario’s economic health.

“Nothing in this agreement infringes on Canada’s sovereign right to develop commercial relations with any country of its choosing,” Freeland noted in the three-page reply.

“NAFTA, and the USMCA, have a provision by which any country can exit the agreement for any reason, on six months’ notice. That withdrawal provision is unchanged.”

On tariffs, Freeland said the federal government remains in “direct contact” with the Trump administration “to seek the removal of illegal steel and aluminum tariffs. There is no justification for these measures. We will continue to seek a resolution.”

The tariffs imposed earlier this year under U.S. “national security” grounds make Canadian steel and aluminum more expensive to customers south of the border, hurting the industry and jobs here.

Wilson said Ontario is “optimistic” the USMCA will create “continued opportunities for trade between our three nations” but is worried the Americans could impose further tariffs.