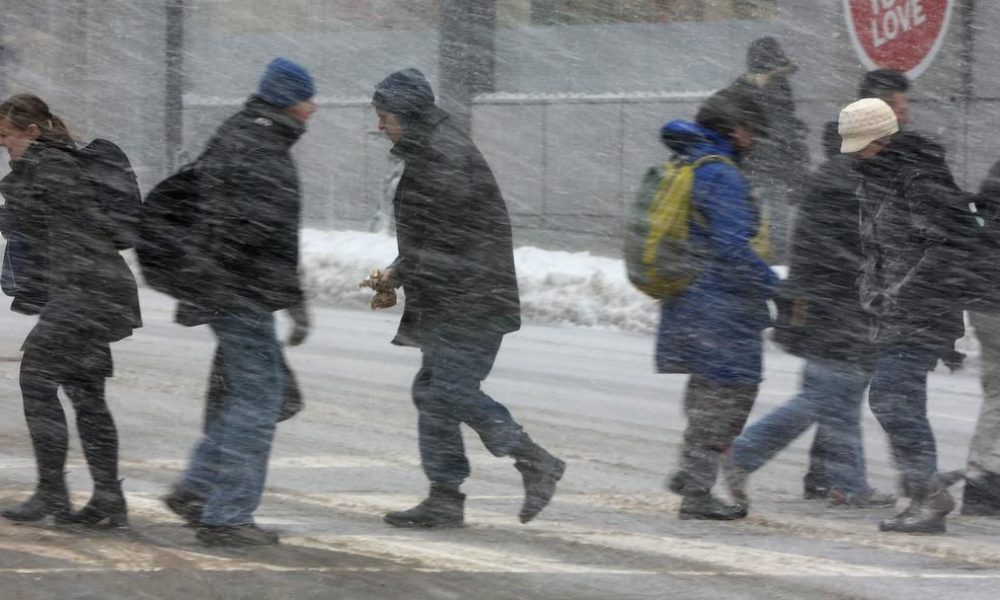 The city may be in for yet another down comforter of snow — Environment Canada put out a special weather statement Sunday warning of the potential for “significant snowfall” later today.

The statement was put out shortly before 2 p.m., explaining that “localized pockets of flurries” could affect areas near the west end of Lake Ontario as northeast winds increase this afternoon.

The snowfall is expected to pick up in the evening and continue through to Monday morning before tapering off.

The general expectation is 5-10 centimetres of snow across Toronto, but areas near Oakville, Hamilton and Grimsby could get as much as 15 cm, as well as areas of the city closer to the water.

The greatest amount of snowfall for Toronto on this date, according to historical records, was 11.2 cm in 1941.

The weather agency is warning that travel could be dangerous as the blowing snow increases, particuarly on the Monday morning commute. Fortunately, Monday is the Family Day holiday.

Temperatures are expected to hit a high of -5 C on Monday, with a low of -15 C with the wind chill. 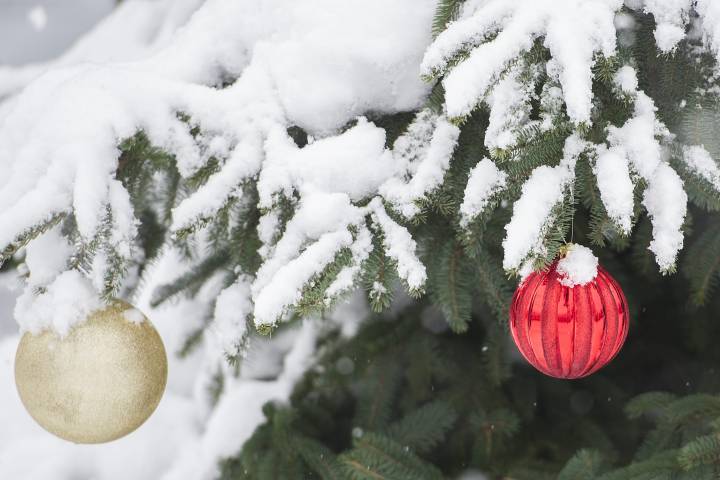 Most Canadians dreaming of snowflakes falling on Christmas Day are going to wake up disappointed.

There may still be snow on the ground in regions that have had a pre-holiday powdering, but some major cities like Toronto are still in green, and festive flurries aren’t in the forecast for most of the country on Dec. 25.

“If you’re expecting the scene at the end of It’s a Wonderful Life when George Bailey is kind of running through Bedford Falls saying ‘Merry Christmas’ to everyone as the snow is falling down in snow banks, that’s not going to happen really anywhere,” Global News Weather Specialist Mike Arsenault said on Saturday.

The Atlantic provinces have gotten a huge helping of snow recently, but days of near-record breaking highs have made quick work of it, Arsenault said. Temperatures have cooled, but there’s no precipitation in the forecast for Halifax or New Brunswick’s three biggest cities.

“It looked like they were set up for a white Christmas, but now it’s unlikely going to happen in Atlantic Canada,” Arsenault said.


READ MORE:
Will Tuesday’s weather in Alberta be a Christmas gift, or a lump of coal?

Moving west, Montreal is anticipating sun and a high of -9 C on Tuesday, with Ottawa looking at -8 C. Both cities have some snow on the ground as of Sunday evening.

There are flurries in the forecast Monday for Toronto and portions of southern and central Ontario. With temperatures right around the freezing mark, however, that snow is unlikely to stick around, Arsenault said.

Toronto is looking at a mix of sun and cloud, and a temperature of -1 C on Tuesday.

There is snow in Winnipeg, but no additional flurries are expected on Christmas Day, according to Environment Canada.

Periods of snow are in the forecast for Regina on Christmas Eve, while Saskatoon has no precipitation and temperatures of -13 C anticipated for Christmas Day.

“It’s going to be very cold there, so the snow that is falling and has fallen isn’t going to go anywhere, because it is so cold,” Arsenault said of the Prairies.

Calgary is looking at temperatures of -5 C and sunny, while Edmonton is expected to be slightly colder — -7 C — and cloudy.

B.C.’s Interior, at least at its lower elevations, is facing the possibility of a green Christmas this year.

In the Okanagan Valley, temperatures have been above normal all month. Kelowna’s Christmas forecast is for -1 and cloudy.

As for Vancouver and Victoria, they’ll have to get a dose of Christmas cheer from the sun, which is expected to shine on both Christmas Eve and Christmas Day.

In Canada’s north, a white Christmas is almost a certainty. On Christmas Eve, Iqaluit is poised for a “near blizzard,” Environment Canada said, and Whitehorse and Yellowknife have a chance of flurries as well.

How common is a white Christmas?

Environment Canada defines a white Christmas as two centimetres or more snow on the ground by 7 a.m. on the morning of Dec. 25.

A perfect Christmas is when those conditions are met and there is also snowfall in the air at some point during the day.

The federal agency’s data shows that the probability of a white Christmas is on the decline.

Since 1994, Halifax, Penticton, B.C., Sydney, N.S., Vancouver, Victoria, Toronto and surrounding area, Saint John and Fredericton, N.B., and Lethbridge, Alta., have had white Christmases half the time or less.

In the case of Vancouver and Victoria, a white Christmas is far less frequent — 10 and 15 per cent of the time, respectively.

On the other end of the spectrum, Winnipeg, Timmins, Ont., and Goose Bay, N.L., have only had one green Christmas each since 1986. And there wasn’t a single green Christmas for Yellowknife, Whitehorse, Iqaluit or Kenora, Ont., in 63 years of data. 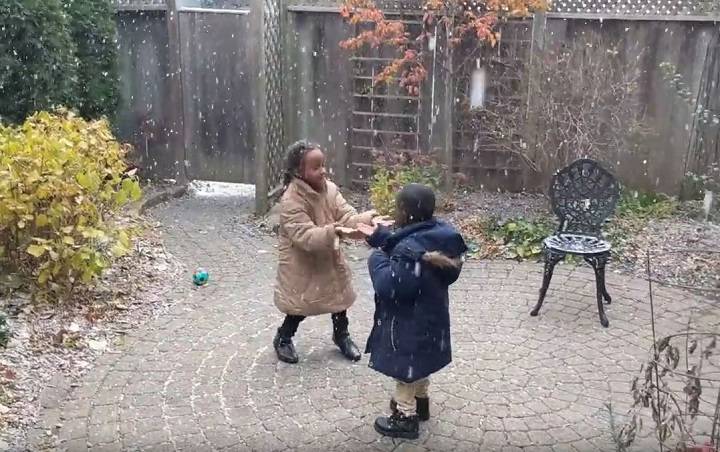 TORONTO – A woman who shared a video of two Eritrean children reacting gleefully to their first Canadian snowfall says the overwhelmingly positive reaction to the clip is reaffirming her faith in the country as a welcoming place for newcomers.

Rebecca Davies shot the video on Saturday, 48 hours after the children shown in it arrived in Canada with their mother and two siblings as privately sponsored refugees.

In the video, the seven-year-old girl and five-year-old boy twirl, dance and revel in the snow shower in the backyard of Davies’ Toronto-area home.

The clip has since garnered nearly 2 million views and been shared thousands of times on Twitter, often with accompanying hashtags and messages welcoming refugees in general and the children in particular.

Davies, who helped sponsor the Eritrean family through the private Ripple Refugee Project, says the video’s reception gives her hope.

She says she encounters racism and anti-immigrant sentiment in her work on behalf of refugees, but says the positive responses to the clip have left her feeling more confident about the society the family is eager to join.

“When a universal, lovely little vignette of kids playing in snow gets this kind of response, it gives me some hope for humanity,” she said in a telephone interview.

Davies said the Eritrean family landed in Toronto on Thursday, bringing an end to a lengthy saga.

She said the single mother fled the war-torn east-African country in 2013 and spent the next five years in a refugee camp in Sudan. Two of the four children who accompanied her to Canada were born in that camp, Davies said, adding all the kids are under the age of eight.

The family’s first full day in Canada was marred by steady rain, limiting opportunities to explore Toronto, which they plan to call home. Conditions didn’t seem too promising on Saturday either, with high winds sending daytime temperatures plunging to near the freezing mark for the first time this season.

Davies said her family had tried to explain the concept of snow to the Eritrean newcomers. So when flakes began unexpectedly descending from the sky, she lost no time in pointing them out to the family.

The two youngest boys stared out the window in fascination, but the eldest boy and his sister appeared to run away after the first look outside.

“I was thinking, ‘where are the big guys? I would have thought this would have been magic,”‘ Davies said. “But then you hear them screaming up the stairs. They found the bag of various winter coats and boots that many people had donated to us, threw on anything, ran past us, opened the … patio door and just started twirling.”


READ MORE:
‘I want to give back’: Toronto refugees and asylum seekers want voices heard

The video shows the beaming children exclaiming in delight and jumping around the small yard as the snow falls. The girl is seen spinning around with her face raised up to the sky as her brother jigs up and down. At one point, both put their hands out and watch the flakes land on their upturned palms.

Davies said the flurry didn’t last very long, but allowed enough time for her six-year-old daughter to teach her Eritrean playmates how to eat snow and gave all three a chance to have a mini snowball fight.

The video struck a chord on social media, where thousands of users liked, shared and exclaimed over the children’s obvious excitement.

Underpinning many of the messages were comments encouraging the family as they begin a new chapter on Canadian soil.

“This is what life is all about. Children, new to Canada that have never seen snow, and embracing it in that magical way that children do,” wrote one Twitter user. “Welcome to Canada sweethearts! Your lives will hopefully be a beautiful journey.”

Davies said the children haven’t just confined their excitement to Canadian weather – they’re currently eager to enrol in a neighbourhood school and start going to class.