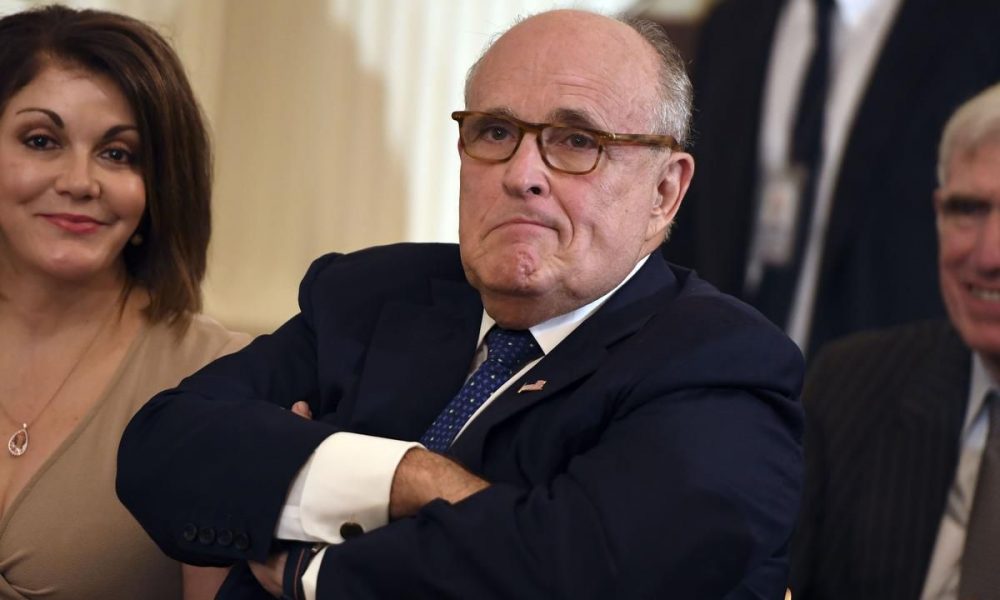 Specifically: what the heck is going on with Rudy Giuliani?

As White House Press Secretary Sarah Sanders has receded from view, the former mayor of New York City has emerged as one of the most prominent public spokespeople for U.S. President Donald Trump.

He has made Sean Spicer look smooth.

Giuliani, a federal prosecutor and an associate attorney general in the 1980s, was hired in April to serve as a public pit bull on Trump’s legal team. Since then, he has sputtered out misstatements and clarifications so frequent and so head-spinning that some observers wonder if he is intentionally attempting to confuse people.

The general consensus seems to favour the simplest explanation: Giuliani is not trying to muddy the waters, just mucking things up.

“He was generally viewed as a smart guy and a skilled lawyer. There are very few traces of those qualities in his representation of Donald Trump,” lawyer Michael Bromwich, who worked under Giuliani in the federal prosecutor’s office, said in an email. (Bromwich now represents former FBI official Andrew McCabe and professor Christine Blasey Ford, both of whom Trump has criticized.) “He seems not well-steeped in the facts and poorly prepared for his many press interviews. Criminal defence lawyers generally don’t wing it; they harm their client’s interests when they do. Rudy appears to be winging it.”

“I don’t know why the president would allow him to go out and continue to talk,” said Rick Tyler, a former Republican spokesman and now a MSNBC political analyst.

Tyler said Giuliani is “out of control.” But he also said it is an “impossible task” to speak for a president whose lying is so “pathological” that top surrogates won’t work for him.

“Rudy is one of the few who are willing to go out there and damage his own reputation on behalf of the president. There just aren’t many people with stature willing to do that,” Tyler said.

The questions about Giuliani’s aptitude were renewed by bizarre performances in three interviews this week that seemed, again, to worsen Trump’s position.

“One wonders if everything’s all right with Rudy Giuliani,” Democratic Rep. Gerry Connolly said on CNN, adding, “He sounds like a crazy old uncle.”

Speaking to the New York Times, Giuliani said Trump’s discussions about building a Trump Tower in Moscow continued through the 2016 election, months longer than former Trump lawyer Michael Cohen has publicly specified. Adopting Trump’s voice, Giuliani said Trump told him the talks happened “from the day I announced to the day I won.”

The next day, Giuliani said he was not speaking for Trump at all. His previous words, he claimed, “were hypothetical, and not based on conversations I had with the president.”

In a Monday interview with the New Yorker, Giuliani mentioned going through “tapes” related to Trump and Cohen, then said “I shouldn’t have said tapes,” then said there are “no tapes,” then said there are unrelated tapes. He also claimed there were “no plans” and “no drafts” for the Moscow tower; detailed plans were published Tuesday by BuzzFeed. Last Wednesday, Giuliani said on CNN that he had “never said there was no collusion between the campaign or between people in the campaign,” appearing to hint at the possibility of collusion by people other than Trump; the next day, he issued a statement saying he had “no knowledge” of any such collusion.

Some associates lament that Giuliani is damaging the reputation he built after the Sept. 11, 2001 terror attacks. Giuliani told the New Yorker that he thinks his legacy might indeed be hurt.

“I am afraid it will be on my gravestone. ‘Rudy Giuliani: He lied for Trump.’ Somehow, I don’t think that will be it. But, if it is, so what do I care? I’ll be dead. I figure I can explain it to St. Peter,” he said.

He soon walked this back too, saying he was just joking.