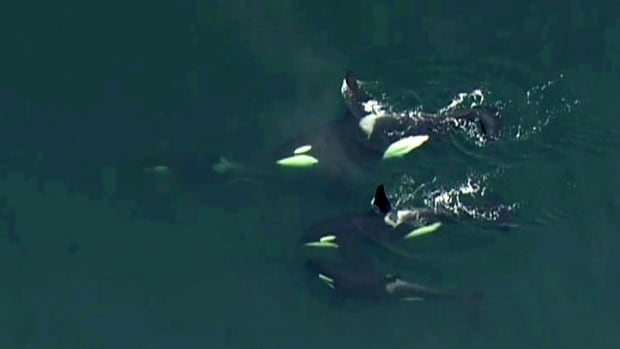 After months of bad news, there finally may be a glimmer of hope for B.C.’s endangered southern resident killer whales.

The video, shot Thursday near Vachon Island in Washington state, shows the calf swimming next to the killer whale known as L77, who had previously been pregnant.

Ken Balcomb, founding director of the U.S.-based Center for Whale Research, confirmed that that this is the first sighting of the new calf. The young whale’s gender is unknown.

Watch helicopter video of the young calf swimming beside its mother

The southern residents have not had a successful pregnancy in three years.

The population is at a 35-year low after three deaths in 2018, and earlier this month, scientists said they expect two more whales to die of starvation by summer.

The plight of the struggling population attracted attention from around the world this summer, when grieving mother J35 spent 17 days carrying her dead baby on her head as she travelled more than 1,600 kilometres.

Weeks later, another member of J pod, J50, was declared dead after a cross-border rescue effort to inject the calf with antibiotics and fight an apparent infection.

Scientists say the killer whales have been struggling to find enough food because of a decline in the Chinook salmon population. 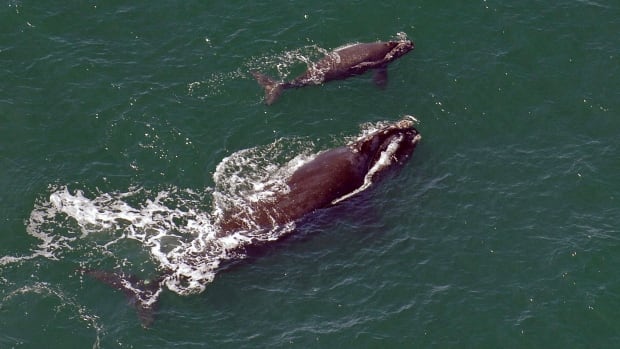 For the first time in more than a year, a North Atlantic right whale calf has been spotted.

The finding is significant, as there are only an estimated 411 members of the endangered species left, and until now there have been no sightings of calves in 2018.

Observers spotted the calf on Friday near the entrance of the St. Johns River by the border of Florida and Georgia.

« We’re excited, » said Tony LaCasse, the spokesperson for the New England Aquarium in Boston. « It’s an optimistic sign. It’s something we can be hopeful for. »

In 2017, only five calves were observed, and LaCasse said at least two, possibly three, of those animals have died. Even the birth of five whales that year was considered a notable drop compared with previous years, when the number of new calves spotted annually was in the high teens or low 20s.

Calving season usually starts in December and lasts until March, with the bulk of the births happening in January and February.

North Atlantic right whales use the warm waters off Florida and Georgia as a nursery for their young so the calves don’t have to burn unnecessary energy trying to stay warm in cold waters. Traditionally, the whales then move up the East Coast to their « summer nursery » in the Bay of Fundy, LaCasse said.

But due to a lack of sufficient quantities of plankton in the Bay of Fundy, in recent years the whales have moved to other areas, including the Gulf of St. Lawrence.

LaCasse said that unexpected migration led to the « calamity » of many whales becoming entangled in fishing gear and killed by vessel strikes.

Canada implemented new measures to try to protect the right whale after 12 were reported dead in Canadian waters in 2017, along with another five in U.S. waters.

LaCasse said the birth of the calf is an encouraging sign, especially given the « drought » of baby whales in the last year, but « we’re a long way from declaring victory on it, » he said. 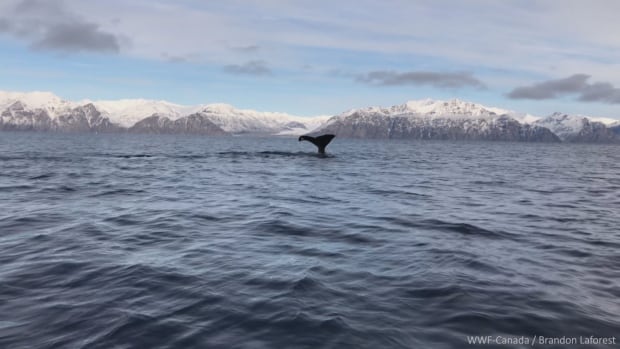 Two sperm whales spotted near Pond Inlet, Nunavut, are a sign of underlying shifts in the High Arctic ecosystem, according to a scientist who saw the pair when out with an Inuit guide at the end of September.

The group was out at Eclipse Sound, about ten minutes by boat outside of the community, when they saw a pair of dorsal fins and thought they had spotted killer whales.

It was only when they got closer that Pond Inlet guide Titus Allooloo realized it was a kind of whale he’d never seen before.

« They’re not known by us, we don’t know too much about them, » said Allooloo, adding that the whales are not traditionally seen near his community.

« It’s only the second recorded observation of sperm whales in the region. Back in 2014 local hunters spotted them, » explained Brandon Laforest, a World Wildlife Fund scientist.

Laforest was on the boat to pick up acoustic equipment being used monitor the impact of marine traffic on narwhal for Environment Canada when the whales were spotted. 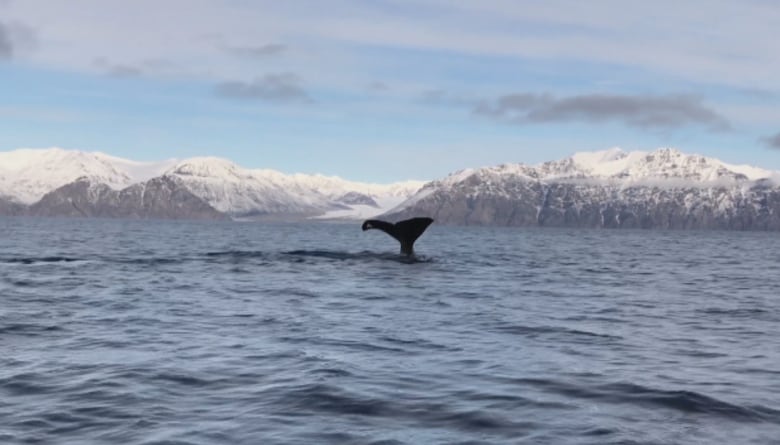 One of two sperm whales spotted ten minutes from Pond Inlet at the end of September. The sighting is only the second time on record that a sperm whale has been seen so far North.

He says they’ve heard the call of sperm whales on their recordings before, but because the whales are known to have an extremely loud vocalisation, Laforest says it was assumed they were located further away in Baffin Bay.

He says it was « really shocking » to see these southern whales, so close to Pond Inlet and so close to freeze up.

With their fleshy dorsal fins, sperm whales are not adapted to the ice conditions of the Arctic waters, said Laforest.

« When we think about the whales that live in the Arctic year-round, such as bowhead, narwhal and beluga … they all have a bony ridge [on their head.]

« When the ice is forming, that fin [on sperm whales] will get in the way, whereas narwhal and bowheads can actually break ice and continue breathing. » 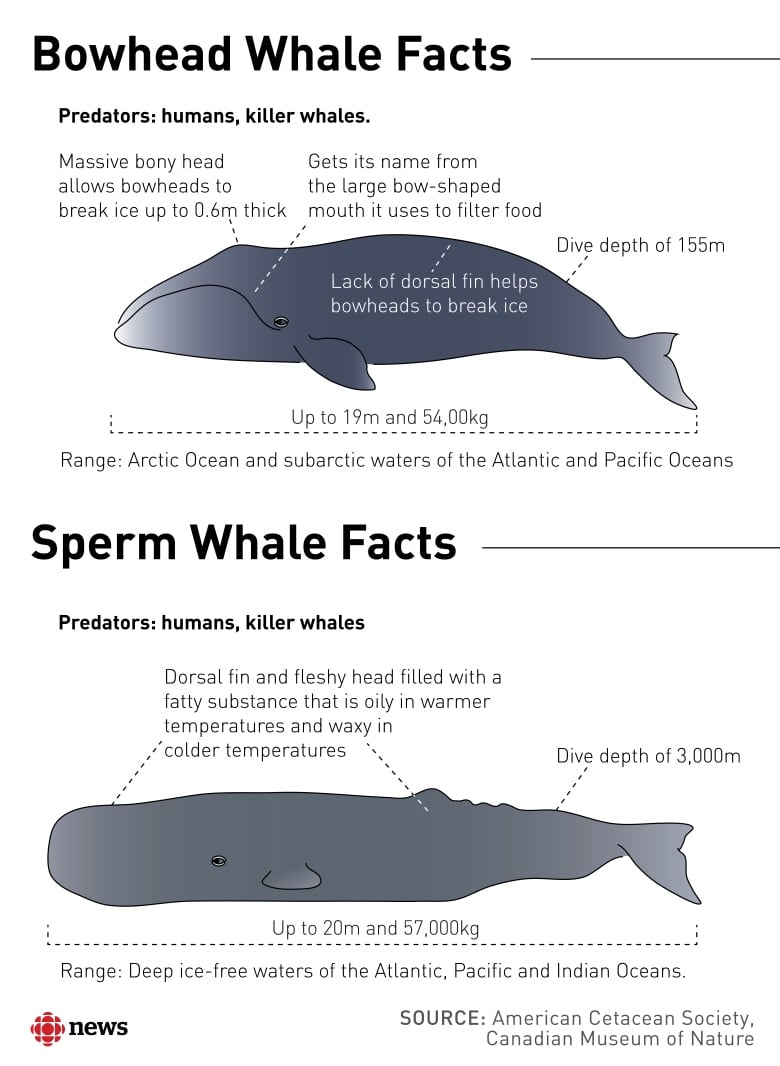 He says the whales have probably gone back south now, but their presence indicates the habitat near Pond Inlet and other Arctic communities is becoming « more open for them to exploit in terms of accessing food. »

Laforest says that’s good news for sperm whales, but may not be so great for Arctic species like bowhead « which traditionally live without much competition because of their intense adaptation to live in a relatively harsh environment. »

However, Laforest says he doesn’t think the ecosystem is on the « verge of catastrophe, » partly because sperm whales are not predatory. 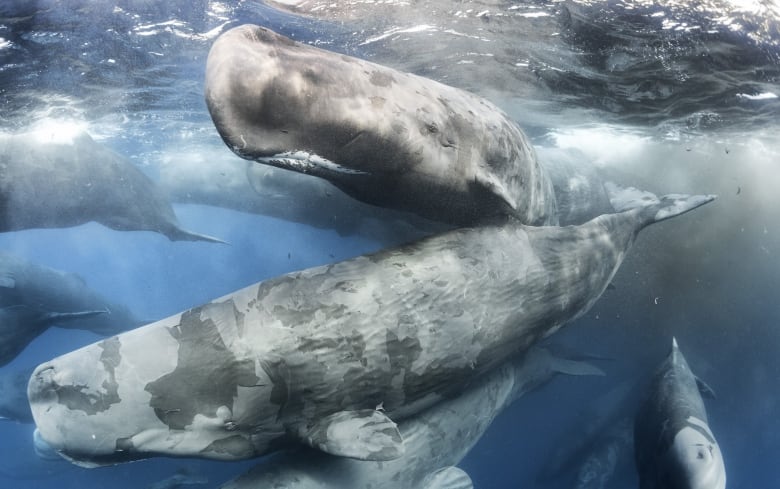 A group of sperm whale in the Indian Ocean. Unlike bowhead and other arctic whales the sperm whale has a fleshy fin and fatty head that is not adapted to breaking through ice.

Killer whales, which Allooloo says are becoming more common in the area, are another matter.

« Killer whales are coming in the North and they are actually hunting narwhal, » Laforest says.

He says Arctic waters pose some risks for both sperm and killer whales, which could get trapped under the ice, if they continue coming North, although he says they haven’t seen that happen yet.

« We see that with northern whales as well, but inexperienced whales exploiting a northern habitat may not know to leave early enough before the sea ice forms. »

He’s hoping Laforest and his crew will be able to use their acoustic recordings to find out more about the whales that have been in the waters near his community.