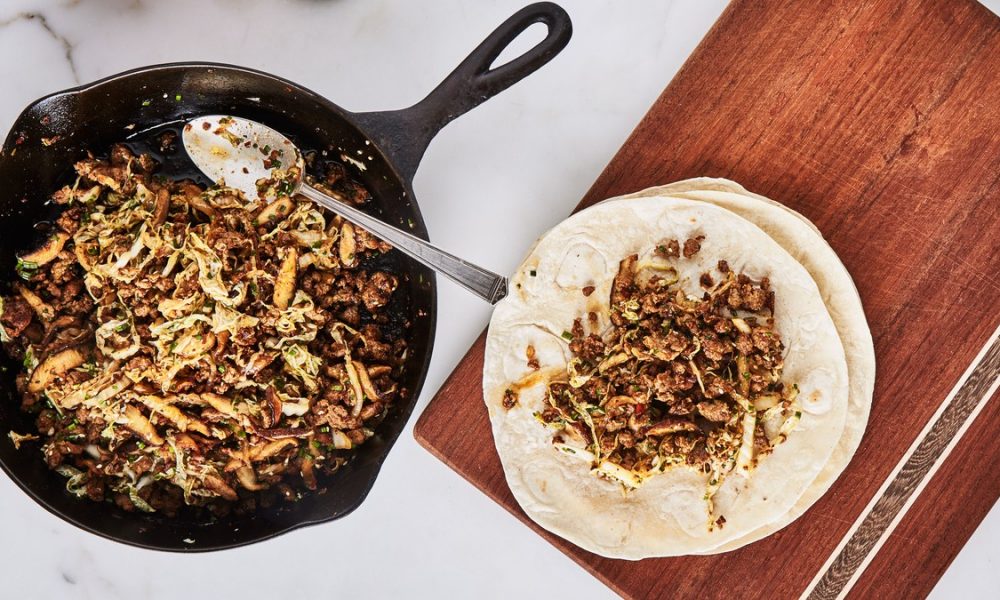 When I wander around a grocery store after work, aimlessly trying to figure out a simple weeknight dinner, it feels like there’s a honing signal guiding me to ground meat.

I know that doesn’t sound immediately appetizing—ground meat needs a rebranding!—but it’s a guaranteed quick-cooking, versatile purchase that can be formed into meatballs, smashed into crispy larb, or stir-fried with any vegetables (and/or noodles!) that I’m in the mood for.

Lately, my go-to has been a one-skillet wonder of stir-fried sausage, cabbage, mushrooms, and chives, all stuffed into warm flour tortillas. It comes together in less than 30 minutes and reheats like a dream for meal prep. Win-win.

The recipe calls for hot Italian sausage, but I’ve made this with mild sausage or a pound of ground pork to equally wonderful results. The clutch trick is grating garlic and ginger right into the meat mixture so it is flavored throughout before it gets all crisp in the pan. (It’s important to let it sit and sear for 6–8 minutes so it gets super brown instead of gray and sad!)

Out goes the meat and in goes sliced shiitake mushrooms, which get crispy and tender in the residual pork fat, and a ton of cabbage. Six cups! I use two bags of the pre-shredded green cabbage from Trader Joe’s because I’m lazy, but Napa cabbage—the one called for in the recipe—has a sweeter, milder flavor, and is worth seeking out if you’re not lazy like me.

Equal parts soy sauce and unseasoned rice wine vinegar coat everything in the skillet and turn into a simple-yet-flavorful sauce. You are supposed to toss in half the cabbage to wilt and then put the rest in raw so it’s still crisp-tender, but I prefer it all to be tender and incorporated with the sauce, which sometimes means adding a little more soy and vinegar before finishing with chives, a drizzle of sesame oil, and sprinkle of sesame seeds for a mildly garlicky, nutty finish.

Now is the best part: wrapping it all up! If you can find mu-shu wraps at your local Asian grocer, that’s ideal to make this like mu-shu pork, but if not, flour tortillas are a nice, pillowy wrapper for the tender, deeply flavorful, saucy meat and veg. Spread a warmed tortilla—I like Trader Joe’s handmade white tortillas, which are nice and chewy—with hoisin sauce and Sriracha to taste, nestle the meat mixture in, roll it like a taquito, and take a big ol’ bite.

Eat this over a plate, because you’ll inevitably spill some of the mixture, and make a pot of rice if you’re making this for meal prep. And hey, you only have one skillet to watch, since everything happened in one pan, and you have plenty of time to lie horizontal on the couch for the rest of the night. You’re welcome. 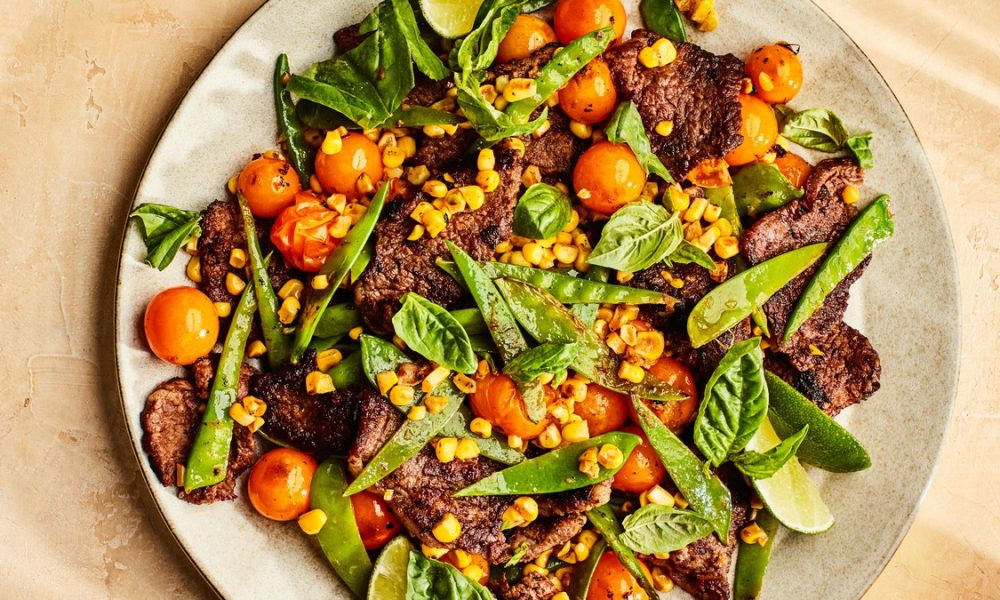 Trim any big pieces of fat from beef, then thinly slice across the grain. Place in a medium bowl; season with kosher salt. Using a Microplane, finely grate lemongrass, chile, ginger, and garlic into bowl. Add sesame oil, if using, and brown sugar and toss to combine. Let sit at least 10 minutes or up to 1 hour. 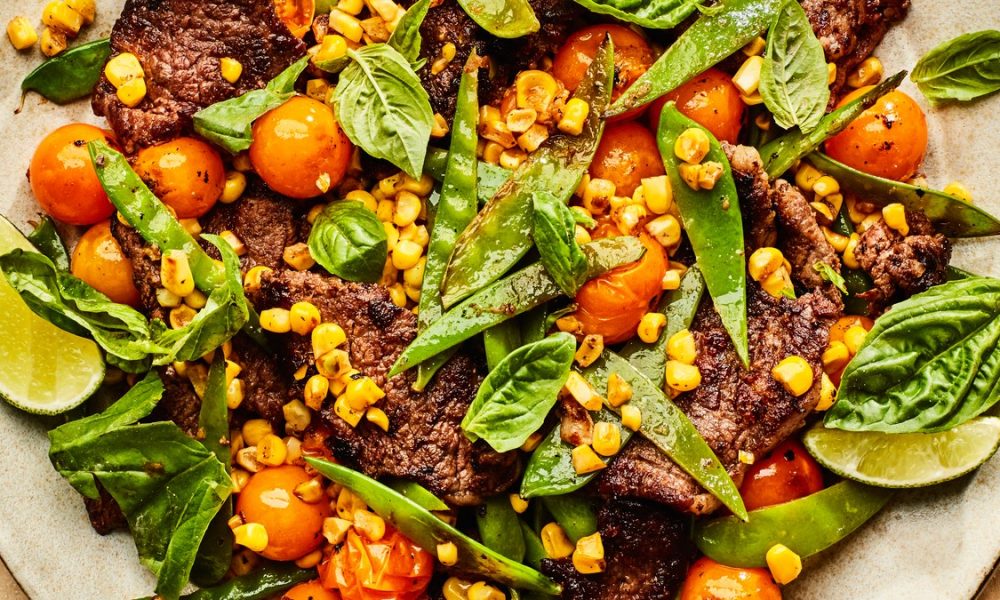 I love to cook, but, after spending a full day in the Bon Appétit test kitchen, the last thing I need to do is start chopping onions all over again when I get home. That means dinners can be a bit scrappy: reheated leftovers from my weekend prep, fridge-dump salads, or just taking whatever I can find and putting a scoop of cottage cheese on it. It’s a tricky time of day, trying to get dinner together while my kids scheme to avoid bedtime, suddenly intensely curious about what I am cooking, how MY day was, and whether Robin Hood and other favorite characters are “real,” all of which would be cute if they didn’t need to be asleep.

This is a beef stir-fry that I can actually handle cooking from start to finish on a weeknight. I can watch our three-year old demonstrate Ninjago spins while I grate the aromatics for the marinade, and I can trim beans while retaining enough brainpower to decide whether our five-year-old will be allowed a real bow and arrow for his Robin Hood Halloween costume (no). I only truly need to pay attention for a minute while slicing the meat, long enough that they might slip past the kitchen, but short enough that they won’t get far.

The key to slicing the short ribs (these may also be labelled Denver steak depending on your butcher) is to cut thinly across the grain. Chicken (thinly sliced) or fish (cut into chunks) would also work just fine. Put it in a bowl and grate the lemongrass, chile, ginger, and garlic right over the top. Add the sesame oil and brown sugar and toss to combine. Let that sit at least 10 minutes or up to 1 hour.

Meanwhile, prep your veg. I like to slice the green beans in half-ish lengthwise so they cook a bit more quickly. Transfer them to a bowl, and, unless you are into perfection, slice the corn kernels off right into that bowl (a few scatter across the counter, no big deal).

Cook the meat in two batches so each one can get a really good sear, then add the veg, which only need a few minutes to go from raw to vivid and crisp-tender. Add the meat back to the skillet along with the tomatoes and half the basil and cook, tossing everything to let the aromatics in the marinade hit everything in the skillet as they get knocked around.

Serve topped with the rest of the basil, a sprinkle of flakey salt, and lime wedges. It’s a last hurrah of summer flavor with all the bright aromas of lemongrass and ginger on top. Best of all, it doesn’t require a sauce since there is so much flavor in the marinade. My kids know that anyone still awake and skulking around the kitchen has to eat whatever I make, so by the time my wife and I sit down for dinner, they may not be asleep, but they’re definitely in their rooms.