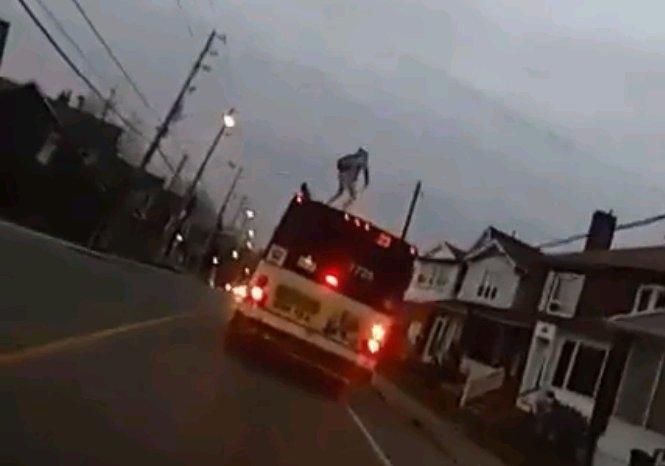 “Words fail me in terms of just how incredibly dangerous a stunt like that is. Even the slightest braking movement, he’s off that bus.”

TTC spokesperson Brad Ross is not pleased with the star of a video spreading across social media, showing a man “surfing” on top of a Toronto bus.

“What he was doing is extremely dangerous,” Toronto police spokesperson David Hopkinson said. “We’ve seen people die from shorter falls than that.”

In the 45-second video posted Tuesday, which contains some graphic language, a person can be seen dangling off the end of a moving bus before pulling himself up on top of the bus and dancing around for awhile.

It had been watched almost 130,000 times on Facebook as of Wednesday evening.

Narration is provided by the filmer, an amused driver behind the bus.

Ross said the TTC will leave it to police to choose whether to look into the incident. Hopkinson said he wasn’t sure whether they’ll investigate.

The apparent age of the video would probably make things more difficult, should the police decide to do so — the bus in question was retired in August, Ross said, and judging by the barren trees, the video must have been shot sometime last winter or fall, or before.

In September, video emerged of another transit daredevil riding on top of a GO Train — but Ross is careful not to call it a trend, noting we’re probably seeing more incidents nowadays due to the proliferation of smart phones.

“Were people bumper-hitching in the ’70s? Absolutely,” he said. “People have been winning Darwin Awards for decades.”