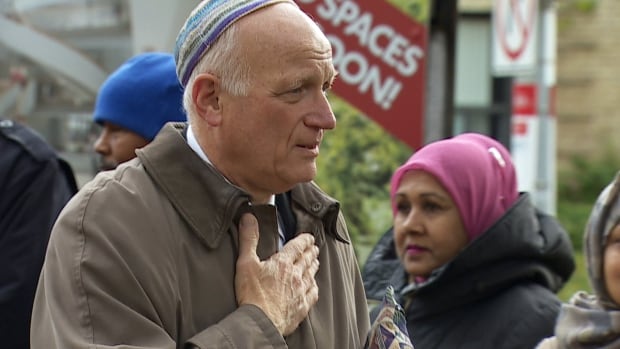 In the wake of a deadly attack on a U.S. synagogue last week, people of faith from across the Greater Toronto Area gathered at Jewish places of worship throughout the city Saturday in an act of defiant solidarity.

More than 200 attendees from various religious backgrounds formed « rings of peace » around 10 synagogues throughout the region on the Sabbath, a weekly day of observance in the Jewish faith.

The events were organized by several Muslim community groups and included prayers, hymns, statements of support and an opportunity to meet neighbours.

« It is our faith that keeps us together. When one person is hurt in our community, through our moral and religious obligation, we are supposed to help, » said Osman Khan, spokesperson for the Imdadul Islamic Centre, one of the groups behind the show of solidarity.

Last Saturday, a gunman opened fire in the Tree of Life synagogue in Pittsburgh, killing 11 Jewish people, many of them elderly.

Six people were also injured in the attack, including four police officers.

The accused shooter, Robert Bowers, allegedly made anti-Semitic remarks during the attack, according to police.

It was just the latest of a series of a high-profile shootings at places of worship on both sides of the border. 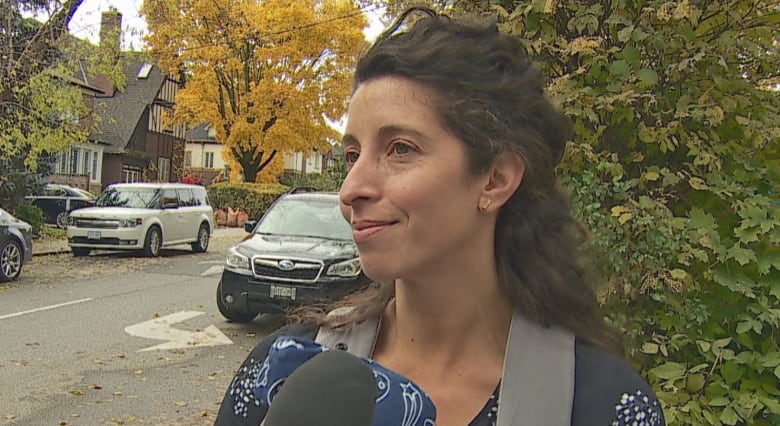 Joanna Sadowski said she was a ‘little bit overwhelmed’ by the show of solidarity at seven GTA synagogues Saturday morning. (Keith Burgess/CBC)

Khan said it only made sense for his community to express its condolences and support for Toronto’s Jewry. In February 2017, some 300 Jewish people from across the GTA, along with many from other faiths, formed rings of peace around local mosques in the wake of a deadly attack inside a Quebec City mosque.

« It gave consolation to us in that difficult time, and now are doing the same, » Khan said.

Joanna Sadowski, a member of the Holy Blossom Temple on Bathurst Street in York, said the public display of compassion was deeply emotional for her.

« It was very moving and very, very beautiful. I think I felt a little bit overwhelmed by the support of all the people who came out to show their solidarity, » she said. 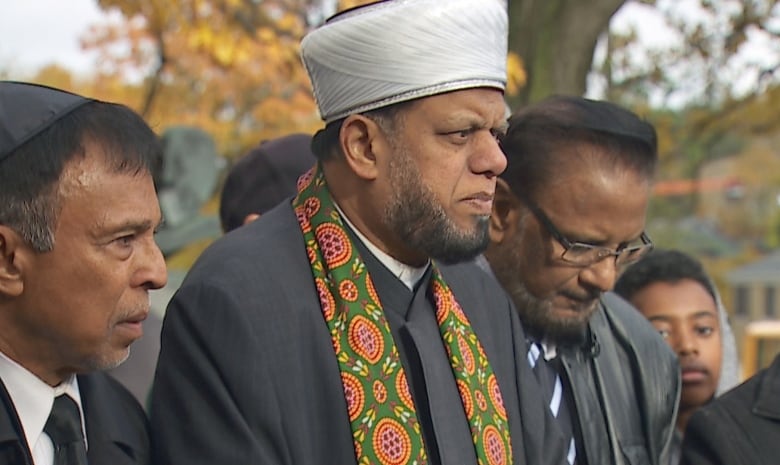 Muslim community leaders recite an opening prayer and a welcome to all those who showed up at Holy Blossom Temple. The assembled group spoke about the kinds of violence that various religious groups face. (Keith Burgess/CBC)

« I think the message is that people want to feel safe in prayer and in community, no matter your religion, no matter your background. That’s a value that we share as Canadians, as Torontonians — that we care and respect each other’s differences. »

Phyllis Denaburg, also a congregate at Holy Blossom, took part in the circles of peace around GTA mosques last year. She said that beyond offering support, the events help connect people who might otherwise not have a chance to meet.

« It’s definitely a message of solidarity and that we aren’t alone. It’s a shame that these things still continue to happen, because it’s not something new. But it does warm our hearts, » she said.

Fienberg spent most of her career as a researcher at the University of Pittsburgh, retiring in 2008 from her job studying learning in the classroom and in museums. Before that she was a member of the Holy Blossom Temple community, which is one of Toronto’s oldest Jewish congregations.

Splansky said Fienberg was a « very special person » who was married at the temple and whose confirmation photo is on its wall of honour.

« I know there’s a whole generation of Holy Blossom members who grew up here with her, who went to school with her and celebrated her wedding day here at Holy Blossom, » said Splansky, who said she didn’t know Fienberg personally.