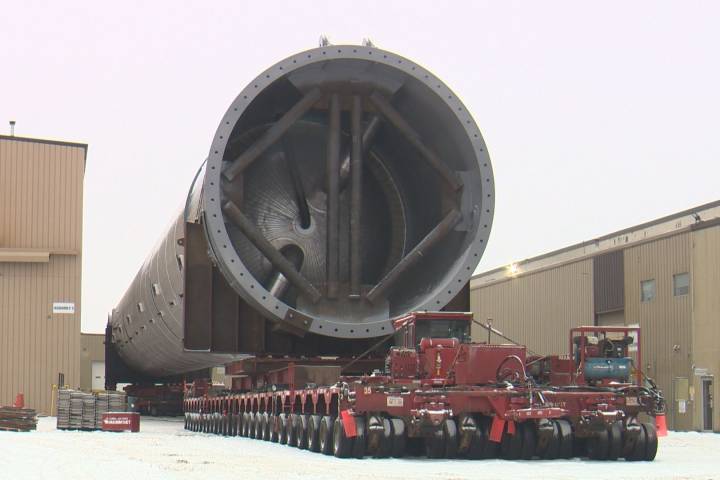 A big move will soon be taking place on the streets of Edmonton, as one of the largest loads in the province’s history begins its journey to a destination north of the city.

Inter Pipeline has built a tower that is 97 metres high at Dacro Industries on 51 Avenue; to put it into context, a CFL football field is 100 metres long.

The company said the tower weighs approximately 800 tonnes, roughly five times the weight of the Statue of Liberty.

The tower, which is made primarily from carbon steel and took one year to manufacture, will be moving this week to the Heartland Petrochemical Complex, which is currently being built outside Fort Saskatchewan.

In a press release, Inter Pipeline said the tower will be used to turn propane into recyclable plastic pellets, which will then be used to make items such as computers, medical equipment and food storage containers.

The $3.5-billion Heartland Petrochemical Complex will be completed in 2021.

Company officials declined to speak Sunday, instead saying they will hold a media availability about the tower on Thursday.

The province picked Inter Pipeline’s project a year ago to receive up to $200 million in royalty credits. Pembina Pipeline, also headquartered in Calgary, is to receive $300 million in credits for a similar project in the same area if it decides to proceed.

The credits, to be paid out after the facilities are operating, can’t be used directly by the petrochemical facilities, but they can be sold to oil or natural gas producers to reduce their provincial royalty payments.

The provincial Minister of Transportation, Brian Mason, is holding a news conference about the tower Sunday afternoon.

–with files from Canadian Press 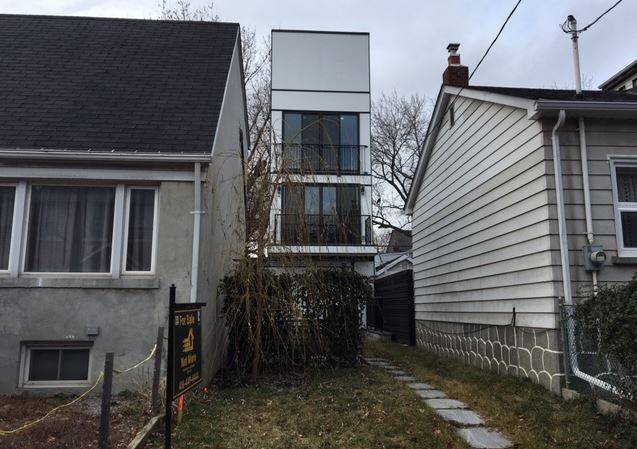 From their back deck, a couple of homeowners in south Riverdale discuss the “big white square” that has become their rear view.

“We knew by the height of it that it would just be grotesque,” said Linda Bourgeois.

“It’s just been a mar on a community.”

Bourgeois is referring to a house that is up for sale on Hamilton Street, near Broadview Avenue and Dundas Street East, and it about a block away from her own home.

According to the MLS listing for 154 Hamilton St., it is a “unique home in central Toronto” and a “modern marvel with four levels of functional minimalism naturally lit via full-height Juliette balcony windows, beautiful terraces, and a central skylight.”

Seller Cyril Borovsky, who bought and built the existing home, calls it a “piece of art.”

“Really the most important thing was the fact that I wanted to make it extremely efficient with the environment in mind,” he said.

“The entire building works on natural gas with very little electronic components. The heating is completely radiant throughout the house… These are completely new ways to build a house.”

But the look of the tall and skinny look of the home has raised eyebrows in the south Riverdale neighbourhood.

“The only thing you could use it for would probably be to show movies on the side because it’s just a big white … It would be a great drive-in movie theatre but unfortunately it’s not, it’s a house,” said Linda Clowes while giggling.

Clowes, Linda Bourgeois, and a group of other area residents, fought the home’s construction several years ag, when they first caught a glimpse of the design plan.

“People weren’t happy with that design and the height … it doesn’t really fit,” noted Councillor Paula Fletcher, who has been to the home before.

“I was a little surprised that the planning department didn’t suggest that it was out of character and shouldn’t be approved.”

The listing has been active since September, but remains for sale.

Borovsky, who initially started building it for himself now, said he is looking for someone who would appreciate it.

He acknowledged the home has led to a lot of discussion within the neighbourhood, and some people expressed their distaste for the style of the home.

“I really hope that this will be landmark after I’m long and gone,” he said.

“I hope they treat it like it’s the Eiffel Tower. It’s something that is new and beautiful part of the neighbourhood.”