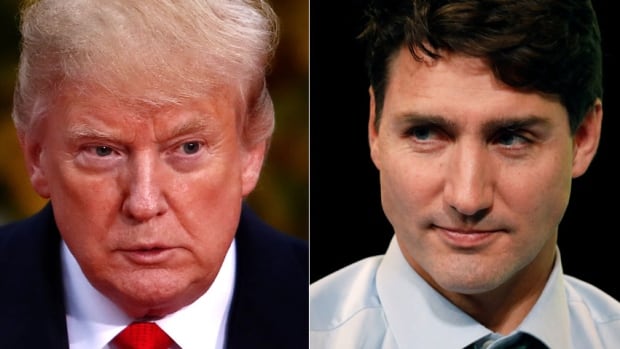 Prime Minister Justin Trudeau and U.S. President Donald Trump discussed Washington’s tariffs on Canadian steel and aluminum on Monday but no talks on lifting the sanctions are planned, a Canadian source familiar with the matter said.

After the conversation between Trudeau and Trump, the Prime Minister’s Office released a statement saying the two leaders had « discussed next steps in addressing steel and aluminum tariffs. » It gave no details.

A White House statement said they discussed « bilateral trade issues, » but did not elaborate.

The Canadian source, who requested anonymity given the sensitivity of the situation, said the phrase « next steps » was more of a general expression.

« The prime minister raises it with the president every time he talks about it. »

PMO and the office of Foreign Minister Chrystia Freeland declined to give more details.

Trudeau’s government strongly opposes the sanctions, which Trump said in late May he was imposing for reasons of national security. Ottawa unveiled a series of counter measures against U.S. goods as a retaliatory measure.

The dispute threatened to overshadow the signature of a new continental trade pact with the United States and Mexico last November. Although Canadian officials initially suggested Ottawa might not take part if the sanctions were still in place, Trudeau ended up signing. 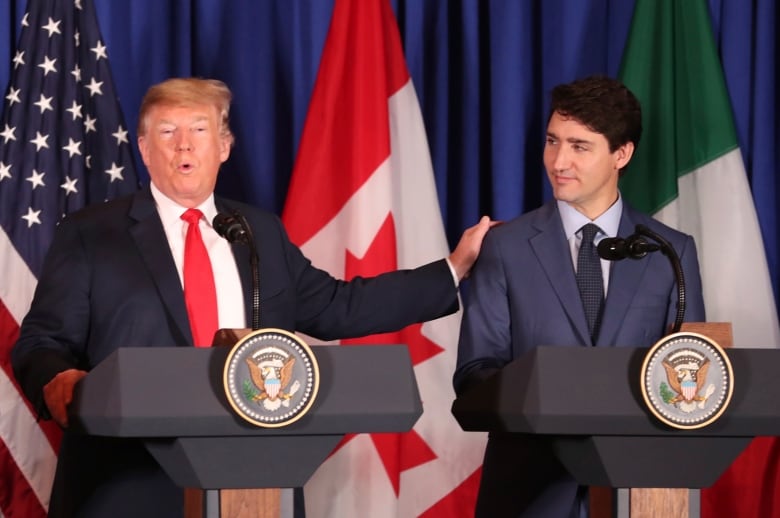 Trump touches Trudeau’s shoulder as they prepare to sign a new United States-Mexico-Canada Agreement that is replacing the NAFTA deal on Nov. 30, 2018. The USMCA must still be approved by lawmakers in all three countries. (Martin Mejia/The Associated Press)

The new United States-Mexico-Canada Agreement (USMCA) is designed to replace the 1994 North American Free Trade Agreement (NAFTA), which Trump had threatened to abandon unless major changes were made.

Such a move could have crippled the economies of Canada and Mexico, which both send more than 75 per cent of their goods exports to the United States every month.

The statement from Trudeau’s office said the two men had discussed the importance of trade and jobs in the wake of the talks to renegotiate NAFTA.

Although Trump said on Dec. 1 he would soon give formal notice of his intention to terminate NAFTA, giving six months for lawmakers to approve the USMCA, he has so far not acted.

Industry officials say U.S. Senate Republicans asked Trump to delay immediate termination to give Congress additional time in 2019 to take up the issue.

A person close to Republican Senator Chuck Grassley of Iowa, the new chair of the finance committee that oversees trade issues, said he was uneasy about terminating NAFTA given « the uncertainty it would cause for U.S. businesses and farmers and the damage that uncertainty could do. » 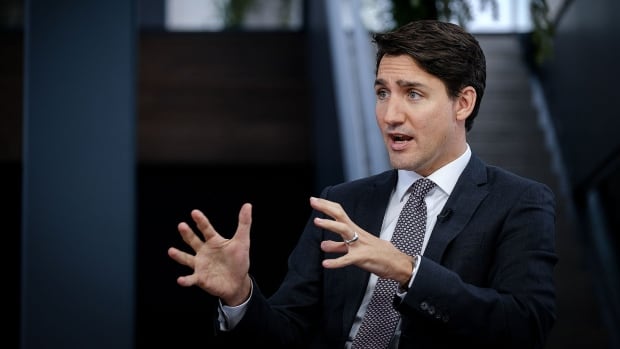 After months of fruitless efforts with the Trump White House, Prime Minister Justin Trudeau appears ready to make Canada’s case for the lifting of steel and aluminum tariffs directly to allies in Congress and across the U.S., as U.S. workers and businesses also feel the sting of the border taxes.

In a wide-ranging interview with The National’s Rosemary Barton that airs Sunday, Trudeau talked about the duties that were slapped on Canada, supposedly because steel and aluminum posed a risk to U.S. national security — and his game plan to have them removed.

« I mean we, obviously, want to get rid of those steel and aluminum tariffs, » he said.  « But we also see the path toward ratification as a place where there are continued conversations from members of Congress, from business or associations in the U.S., from governors who also want to see these tariffs gone, and we’re going to keep working on that. »

« Every step of the way there continue to be levers to pull on and we’re going to continue to do what Canadians expect us to do, which is look at every opportunity to stand up for our interests. »

Tariffs of 25 per cent on steel and 10 per cent on aluminum imports from Canada were put in place on May 31, taking effect the next day.

Every step of the way there continue to be levers to pull on.– Prime Minister Justin Trudeau

That same night, Canada announced its retaliation: On July 1, dollar-for-dollar countermeasures would be imposed on up to $16.6 billion in U.S. goods, including steel, aluminum and other products like whisky, chocolate, and orange juice.

It was a calculated retaliation, aimed at key Republican districts — like in Kentucky and Wisconsin — and other swing states like Florida.

Last year, the Canadian steel industry employed more than 23,000 workers and contributed over $4 billion to the country’s GDP. Canada also buys more U.S. steel than any other country in the world.

To try to soften the blow, the federal government announced a compensation package for Canada’s steel and aluminum industries in June.

Trudeau government officials made it clear from the start, if the U.S. lifted their « unjust and illegal » tariffs, the Canadian ones would disappear as well. 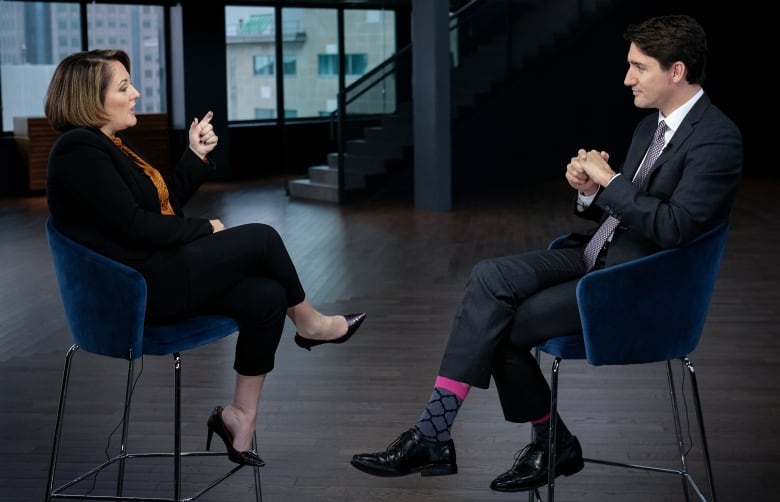 The National’s Rosemary Barton interviews the prime minister, including asking about the U.S. tariffs on Canadian steel and aluminum. (Evan Mitsui/CBC)

But as the weeks and months passed, it became clear Donald Trump was ready to pour more gas on the fire.

« I don’t want to do anything bad to Canada. I can — all I have to do is tax cars — it would be devastating, » he said in September.

The president threatened a 25 per cent duty on autos, which experts said would cripple the Canadian industry.

All the tariffs were introduced under the guise of a little-used section 232 of the 1962 Trade Expansion Act. The clause gives the president power to impose duties on foreign products if the White House deems they would « threaten to impair the national security. »

Those car tariffs never materialized, and at the end of NAFTA re-negotiations, Canada was able to secure an exemption for a certain number of auto parts from possible future auto tariffs.

Foreign Affairs Minister Chrystia Freeland long maintained the tariff discussions were separate from the trade deal negotiations, but in the final days before the new CUMSA pact was reached, Canada sought a tariff shield from the U.S. during trade meetings in Washington.

Trudeau has also spoken directly with Trump about the tariffs on several occasions.

There were reports from Mexico that the tariffs might be lifted once the CUMSA was signed, but as the three North American leaders put pens (or Sharpies, in the case of Trump) to paper at the G20 summit at the end of November the tariffs remained.

This summer the U.S. filed complaints at the World Trade Organization against Canada, China, the European Union, Mexico and Turkey in response to retaliatory tariffs launched against the United States.

The prime minister is unfazed.

« We will not rest while those barriers remain, » Trudeau said at the G20.

And as General Motors plants across the continent, including one in Oshawa, Ont., prepare to close, Trudeau used that issue to prod Trump once more on the tariffs.

« Donald, it’s all the more reason why we need to keep working to remove the tariffs on steel and aluminum between our countries. » 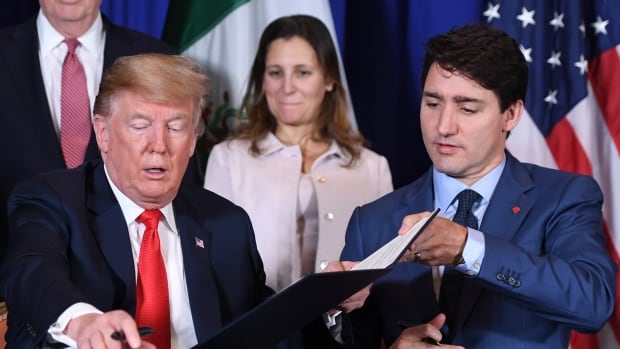 It’s a political long-shot, but opposition parties are teaming up to find out more about what Ottawa is doing to get the Trump administration to lift its tariffs on Canadian steel and aluminum.

Conservative and New Democrat MPs are calling for an emergency meeting of the Standing Committee on International Trade to consider a motion that would demand the prime minister appear before the committee to answer questions about Canada’s tariff strategy.

In a letter to the committee’s clerk, Christine Lefrance, opposition members say they want Justin Trudeau to testify before Parliament rises for the holiday break, and to also present a plan to bring the tariffs to an immediate end.

« The Prime Minister failed to ensure tariffs were removed prior to signing the new NAFTA trade agreement and businesses across the country have already been forced to cut orders, reduce shifts and lay off workers, » the letter says.

« Canadians are now facing a competitiveness crisis that the Trudeau government cannot afford to ignore any longer. »

Conservative and NDP MPs are extremely unlikely to get their Christmas wish; the Liberals have the majority on the committee and would have to vote in favour of inviting the prime minister to testify.

The last time a sitting prime minister appeared before a committee was in 2006. Then-Prime Minister Stephen Harper testified at a Senate committee to discuss his plans to alter the way the red chamber operates.

Trudeau, Foreign Affairs Minister Chrystia Freeland and senior members of the Prime Minister’s Office have been lobbying the Trump administration to end the tariffs ever since. The government also imposed reciprocal tariffs on U.S. goods as a way to pressure the Americans to end their tariff program.

Ottawa had hoped to see the tariffs lifted before Canada signed the new NAFTA agreement, which happened this past Friday on the sidelines of the G20 summit in Buenos Aires, Argentina. However, Canadian lobbying efforts and pressure tactics have not been successful so far.

Canada has launched a legal challenge of the tariffs in the U.S. court system and before the World Trade Organization.

Prime Minister Justin Trudeau used some face time with U.S. President Donald Trump in Paris on the weekend to raise the issue of the U.S. steel and aluminum tariffs that still have not been lifted despite the successful conclusion of the NAFTA talks.

French President Emmanuel Macron hosted a private dinner on Saturday night for the world leaders who travelled to France for commemorations for the Nov. 11 centenary of the First World War armistice. Trudeau’s office had previously told reporters the pair had a « good interaction » that evening, but didn’t elaborate.

« I absolutely brought it up, » Trudeau said in response to a question from CBC News at a news conference on Monday morning. « The issue of steel and aluminum tariffs continues to be a concern to Canadians, like it is a concern to many American citizens and companies.

« As I’ve repeated to President Trump, I hope we’re able to resolve in the time before we meet each other in the G20 in Argentina. »

The new United States–Mexico–Canada Agreement (USMCA) was announced on Oct. 1 after more than a year of fraught negotiations. Early last summer, the U.S. stopped exempting Canada and Mexico from its « national security » tariffs on steel and aluminum.

Trump and other officials from his administration have spoken openly about the usefulness of the tariffs as leverage in negotiations.

Trump has also mused about how much revenue that tariffs bring in for his government, despite their crippling effect, not only on steel and aluminum producers, but to secondary manufacturers, for whom their raw materials become more expensive.

Canada imposed retaliatory tariffs on the U.S. as of July 1, adding more pressure to trade in steel and aluminum products between the two countries, which previously enjoyed tariff-free trade in these products under the original North American Free Trade Agreement.

The USMCA is expected to be signed on Nov. 30, the day before a new Mexican administration is sworn in.

That also coincides with the meeting of G20 leaders scheduled for Buenos Aires, leading to speculation that a signing ceremony could be held on the margins of that summit.

But no official details have been announced yet for the signing of the USMCA.

Mexican officials have said they want the tariffs lifted before the signing ceremony takes place.

But Canadian officials have not gone that far. Neither did Trudeau, when asked again Monday whether his government has placed any conditions on Canada’s signature.

« Discussions and work is ongoing. And as always, I won’t be negotiating in public, » the prime minister said.

Reporters asked Trudeau what Trump said when the prime minister raised the issue of steel tariffs.

« The president echoed that he certainly hoped that we were able to keep moving forward on what has been a positive trade relationship, » Trudeau said.