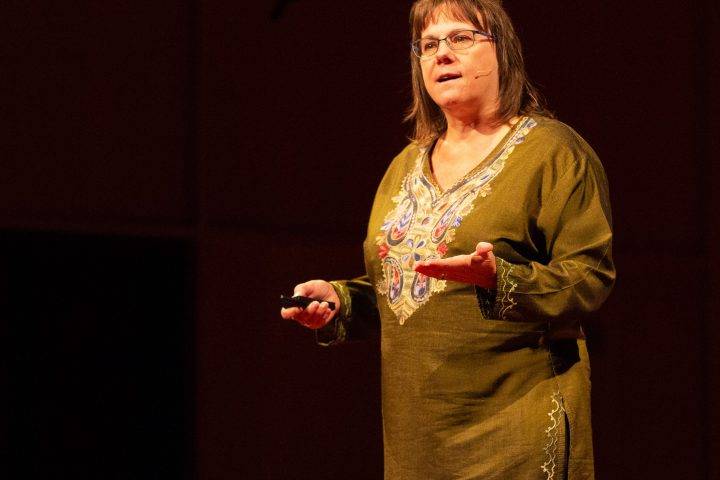 A sea of ideas washed over the University of Calgary campus on Nov. 3 at TEDxCalgary — an independently-organized TED event. The event’s Navigators series featured 16 speakers who are pursuing the next wave in their fields and addressing societal problems with their research.

Dr. Barbara Perry is a social science professor at the University of Ontario Institute of Technology and the director of the Centre on Hate, Bias and Extremism. She researches far-right extremist groups and wants to boost public awareness about what she describes as an escalating movement.

The far-right is what we think of as skinheads and neo-Nazis, Perry said.

“Their black jackets and their boots and all of that. That’s the image that we have of the far-right — and there’s still a lot of those characters around,” she said, mentioning groups such as the Soldiers of Odin and the Three Percenters.

Perry said members of the far-right tend to be younger and disenfranchised in some way, either unemployed or underemployed.


READ MORE:
Why it’s so hard to stop online hate before it becomes real-life violence

Aside from similar nationalistic and exclusionary messaging, the alt-right is a bit different, she said.

“I class the ‘old right’ as the shock troops and the ‘alt-right’ as the intelligentsia,” Perry said. “So these are the ideas people. They’re much, much smoother in presentation and much more professional, and trying to sanitize the movement in some respects.”

She said the alt-right tends to include older, middle-class, well-employed, polished and even preppy people, like the Proud Boys. The alt-right is a “cult of personalities,” often characterized more by individuals — like Ezra Levant, Faith Goldy and Steve Bannon — instead of groups, she explained.

“It puts me in mind of in the ’80s [when] the grand wizard of the KKK said, ‘Throw off your white hoods and put on your business suits.’ And so now, it’s like, ‘Take off your black jackets and put on the sports shirts.’”

But why are extremist movements gaining traction now? It’s a perfect storm — one that was brewing before U.S. President Donald Trump’s rhetoric dominated the news cycle, Perry said.

In the Canadian context, there has been a move to the right around anti-immigrant sentiment and Islamophobia, Perry said, citing Stephen Harper’s niqab debate in the 2015 election, Kellie Leitch’s Canadian values screening proposal, and former Quebec premier Pauline Marois’ policy and rhetoric.

“[These groups] have been able to exploit, obviously, Trumpism and his messaging, but also the crises we’re experiencing here — as they’ve been constructed — around immigration and the entry of refugees and irregular migrants,” Perry said. “So they can exploit that, and twist it and turn it in a way that makes them look like a threat, whether it’s to culture or economics or even our security. So they’re really masters at twisting reality in many ways.”

Dr. Barbara Perry is a social science professor at University of Ontario Institute of Technology and the director of the Centre on Hate, Bias and Extremism. She has been researching far-right extremist groups and wants to boost public awareness about the movement.

Perry’s graduate students are working on digital interventions against hateful speech, and she said that like them, unpacking the mythology behind the movement is what the public needs to do, too.

“We need to force these groups and these demagogues to unpack their facts. ‘Where’s your evidence?’” Perry said.

For example, when people overgeneralize and say migrants are criminals, Perry argues that we need to challenge these claims with counter-evidence. Perry said most data shows new Canadians are more likely to be victims than perpetrators of crime.


READ MORE:
Scott Thompson: We live in a world of extremes, while the middle majority stays silent

However, Perry acknowledges that people attempting to challenge such claims are better off having conversations in neutral environments than at partisan events like political rallies.

“It’s not the extremes we need to bring together, it’s what some people call the mushy middle who are either apathetic or not really engaged or not really following,” Perry said. “How do we get them engaged and how do we get them to places where we can have those conversations? I think that there are creative ways to do that: framing it in terms of an arts venue or an arts opportunity that’s appealing to more people than just talking heads.”

Extremism comes in many forms

A grant led Perry “into the fray” researching hate disseminated from extremist groups, and her experience has now become a call to action for both policy-makers and the public.

“I was getting frustrated by this obsession with Islamist-inspired extremism and the failure to take account of any other form,” Perry said.

“My core thesis is: it’s a dangerous mistake to discount the risks associated with the far-right as we’ve done ad nauseam,” she added.

Perry wants to get across what these groups look like and what they’re doing, especially since they can come in many forms.

“You can’t just identify them by looking at them anymore. It’s much more insidious in that respect,” she said. “Even in terms of the messaging, it’s hard to pick it apart — ‘What really is your position?’ So I think it’s about enhancing our critical literacy, as well, especially among youth because that’s really who their targets are.”

Many factors combine to create an extremist, Perry said.

“It’s about the individual. It’s often about where they are regionally in the country, what the politics are there, what the economics are in the area,” Perry said.

“The one common thread is social media, the ease of access to these messages and the power of those messages, depending on how they’re framed and represented,” she added.

Dr. Jessalynn Keller, assistant professor of critical media studies at the University of Calgary, says we need to listen to young people.

Dr. Jessalynn Keller, assistant professor of critical media studies at the University of Calgary, spoke at the conference about navigating girls’ culture in the complex online world.

“We need to listen to girls,” she said. “Girls are political activists and smart and are doing great work around different feminist issues [like rape culture, the Me Too movement and sexual violence.]

“They, I think, have the answers to move us forward and to change the culture that we’re living in.”

As a ’90s teen, Keller was drawn to the Riot grrrl subculture that embraced a political identity, which eventually led her from a master’s to a doctorate.


READ MORE:
‘You are telling all women they don’t matter’: Jeff Flake confronted after voting yes on Kavanaugh

“Girls are seeing what happened to Dr. [Christine Blasey] Ford and are saying, ‘We don’t want to be in a world where that happens. How can we change that?’” Keller said. “Well, we can start teaching boys about consent when they’re 13 years old so that there is no confusion. We can start changing the dress code policies so we don’t have these ingrained ideas that girls’ bodies are distracting to boys or that girls are just sexualized objects for boys to look at, so changing things when people are young enough to actually learn new ideas because we’re not going to change these old guys’ minds. When these young people grow up, we will be able to vote them into office, and that’s how society changes.

“Focusing our energy on [senators] and perpetrators, I think our energies are misguided… We need to redirect our energy to young people which are providing some solutions to eradicate rape culture, to actually move Me Too forward, but we’re seeing pushback against these progressive movements that young people are really spearheading.

“I don’t think we’re going to change the minds of 90-year-old, white, male senators, but we can change things from the bottom up and that’s working with young people,” she added.

Keller said girls are leading conversations around curriculum about consent, dress codes and attitudes around girls and boys to create a more equitable society.

“There was a lot of adult pushback to this, ‘These girls — why are they getting all worked up over a silly crop top? You should just be glad you don’t have to wear a burka.’ Racist comments like that. ‘No one’s going to take you seriously in a crop top.’”

Keller said the students got hailed with sexist, racist and classist comments online, mentioning the additional barriers some with multiple identities face when delving into the online abyss. Crop Top Day was both a social media movement and a traditional protest, with students of all genders rallying outside the school.

Dr. Jessalynn Keller, assistant professor of critical media studies at the University of Calgary, says we need to listen to young people.

Keller stressed that social media is only one aspect of the story.

“Their protest is being mediated in a new way. They may be connecting with a larger pool of people because of the scope of social media and the speed of it, but there’s this precedent for this idea [and activism].”

“The ideas are the same,” Keller said, explaining how in the 1970s, women gathered in someone’s living room to discuss their experiences with household violence — akin to Me Too’s developments.

In an “adult-oriented society,” we often don’t take young people’s activism seriously or think they aren’t interested in politics, Keller said, adding that we tend to infantilize teens, especially girls. She said it’s no surprise girls would advocate for dress codes or curriculum because it affects their daily lives.

Keller said people need to have conversations with young people in their lives, taking their views seriously, and to pay attention to youth culture. In a large-scale American example, March for Our Lives saw young people collaborating and driving the gun-control campaign where Keller said adults did a “fairly good job” of stepping back.

Allow kids to tell us what they want to see change, she said.

TEDxCalgary curators said the conference is about tackling problems by educating people on a local level. The talks aren’t the complete answer. Instead, speakers help the crowd understand the current situation and provide insight into how to proceed more wisely.

“It’s really to give people that basic idea and inspiration to say, ‘This is important. I agree it’s important and I’ve been given tangible things I can wrap my head around and go out on my own journey of discovery and figure that out.’ So it’s planting that idea,” said Jonathan Perkins, CEO and co-founder of TEDxCalgary.

Twitter user Kamil Kanji included Perry in a tweet that thanked speakers for the inspiration and “left [her] with so many thoughts that have changed [her] perspective on our current day society.”

@TEDxCalgary Had an absolutely amazing and inspirational time at TEDx. Alice Woolley, Ramona Big Head, Dr. Shadia Drury and Dr. Barbara Perry all left me with so many thoughts that have changed my perspective on our current day society. Thank you to everyone involved!!!.

“Always amazing to hear about her work on girl activism and the importance of paying attention to the voices of girls in order address the issues that we face as a society,” she said.

Great @TEDxCalgary talk by @jessalynn_marie – always amazing to hear about her work on girl activism and the importance of paying attention to the voices of girls in order address the issues that we face as a society.

On Facebook, Taunya Zipse said the event was incredible.

“I appreciate how encouraging our host was for the audience to participate. To engage in discussions,” she wrote. “I left feeling expanded and having had perspective shifts.”