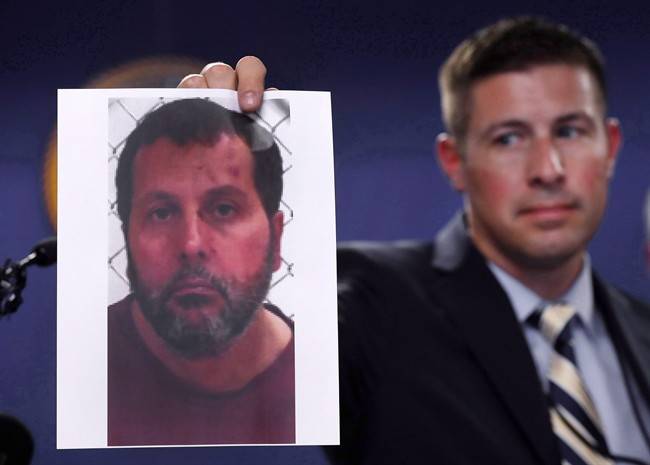 A Montreal man who told investigators that his mission was “to kill and be killed” was convicted of terrorism and other crimes Tuesday in the stabbing of a Michigan airport officer.

Federal prosecutors had an easy time persuading jurors: Witnesses wrestled Amor Ftouhi to the ground after seeing him attack Lt. Jeff Neville at the Flint airport in June 2017.

Ftouhi, 53, was convicted of three charges. A native of Tunisia, he also had Canadian citizenship and was living in Montreal at the time of the attack.

“This isn’t a mystery. He was caught right there. He has the knife in his hand,” Assistant U.S. Attorney Cathleen Corken told jurors.

WATCH: Montreal man accused in Flint airport stabbing says it was ‘his mission’

Investigators say Ftouhi wanted to stab Neville, seize his gun and shoot people in the airport. He legally drove into the U.S. at Champlain, N.Y., and arrived in Flint five days later. He tried unsuccessfully to buy a gun at a gun show and instead bought a large knife.

Witnesses said he yelled, “Allahu Akbar” – God is great – during the attack.

Neville survived but has lost feeling in part of his face as a result of being stabbed in the neck. He no longer works at the airport.

“This is what a Muslim is born for,” Ftouhi said in a handwritten note to his wife that was found in his apartment.

FBI agent Shadi Elreda told jurors about his interview with Ftouhi after his arrest. He said Ftouhi was upset that Neville might survive.

Ftouhi’s lawyers didn’t offer an opening statement at trial and didn’t call any witnesses. In her closing argument, attorney Joan Morgan said Ftouhi was unstable and believed it would be easier to be killed by police in the United States than in Canada.

“He was a person who was absolutely looking for a way out,” she said.

Neville described the attack in testimony last week. “I was watching this puddle of blood underneath me that was spreading and I just remember how weird that was. … I felt like if I laid down on my back, I might not get back up,” he said.

Airport police Chief Chris Miller said he jumped on Ftouhi and tried to handcuff him.