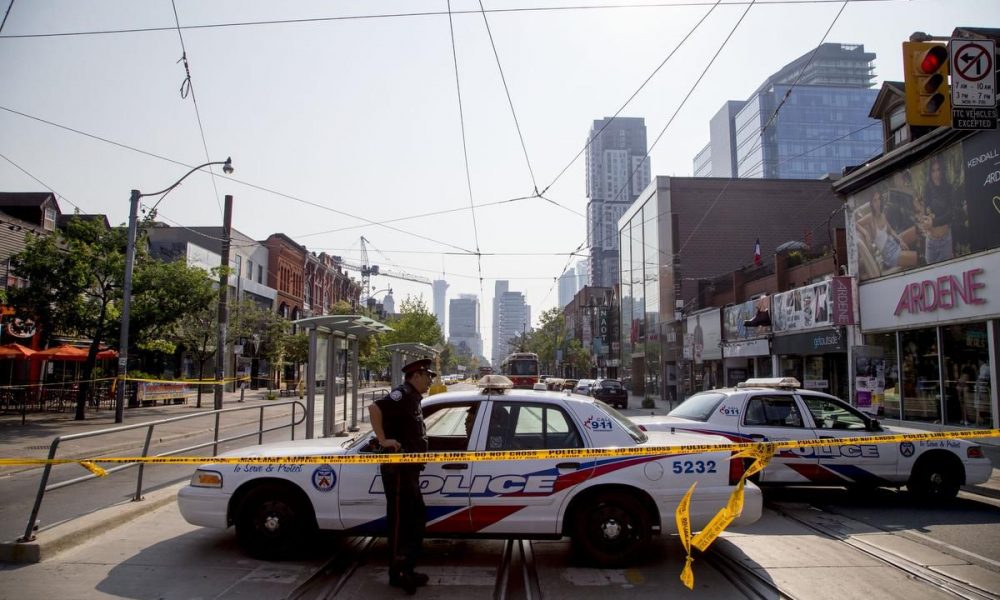 On Dec. 21 at 9 p.m., three men were shot in Etobicoke. Two were found in a bullet-riddled BMW. One, Cimran Farah, 20, died in the hospital six days later.

Farah’s death was the 96th homicide in Toronto in 2018 — the latest, as of Monday afternoon, in a year in which the city surpassed its previous record of 90, from 1991, by mid-November.

The youngest victim was a 3-week-old baby girl, one of ten minors killed this year.

The oldest was 94-year-old Betty Forsyth, who was killed in April along with nine others in the Yonge St. van attack.

Forty-six of those killed — just under half — were under the age of 30. Seventy-five were men and boys. Twenty-one were women and girls. By the Star’s count, police have neither arrested nor issued a warrant for arrest in 33 of these killings, excluding one apparent murder-suicide.

In a year-end press conference this week, Toronto Police Chief Mark Saunders called 2018 a “unique” year marked by increases in gun violence and two exceptional mass casualty events. Looking ahead to the new year, Saunders was optimistic that homicide numbers will decline — a pattern the city has seen before, following the previous record-high year 1991 and another spike between 2005 and 2007.

The 96 victims of Toronto’s record year in homicide

Every Toronto homicide in the past 15 years — mapped

But, as criminologist Scot Wortley notes, without better understanding why shooting and gang-related violence has increased, it is difficult to know if this year was an outlier or a sign of a larger trend.

The year began with the Jan. 29 arrest of an alleged serial killer who is accused of targeting men connected to Toronto’s Gay Village since 2010. Bruce McArthur now faces eight charges of first-degree murder.

Then came the April van attack that left 10 dead and 16 injured and in July the Danforth shooting in which 10-year-old Julianna Kozis and 18-year-old Reese Fallon were killed and 13 injured.

More than half of Toronto homicides this year, 51, were fatal shootings, just two less than 2005, the city’s infamous “Year of the Gun.”

The victims include 22-year-old Yohannes Brhanu, found dead after a gun battle on a residential street in a car surrounded by bullet casings and shattered glass; 29-year-old Ruma Amar, shot in the back of the head in a hail of gunfire meant for someone else as she, her husband and sister were leaving a North York bowling alley; and 31-year old Jenas Nyarko, a shelter worker killed in a drive-by shooting while sitting in a car outside her apartment with friends after attending a funeral.

The number of shootings in the city this year also appears to have broken a record: In the latest police numbers published Monday, 2018 had seen 424 shootings, more than 2016’s year-end total of 407, which is the largest tally in any year since 2004, according to police data.

Saunders has attributed the gun violence to increased street gang activity and pointed to similar trends across North America. And while he outlined enforcement challenges for police that come with arresting and charging gang members — including witnesses with justifiable fears of retribution, poor community relationships with police, and a “team sport” mentality in gangs that means individual arrests of gang members have limited impact — he emphasized the need for solutions that go beyond policing at his year-end press conference.

“The enforcement piece plays an important part. I’m not here to say that it’s softer policing. I’m here to say that it’s smarter policing. There have to be agencies at the front end that prevent these young boys from shooting others. There’s a lot of funding that needs to be put in. Not grant funding; core funding, into the communities. Nobody’s ever, that I know of, born saying ‘I want to be a street gang member,’” Saunders said.

“To think we can arrest our way out of this is a falsehood.”

In mid-December, the federal government announced Toronto will get $6.76 million in Public Safety funding over a five-year period for a program called the Community Healing Project. Police will also get up to $400,000 over two years to enhance the Neighbourhood Officers Program in eight priority neighbourhoods. Consultations about a handgun and ammunition ban are ongoing.

In the same month, the province announced cuts to after-school programming for at-risk youth that included part-time employment opportunities and tutoring for struggling elementary school children.

Wortley, who has researched gangs and gang violence in Toronto and Ontario, noted that while Toronto did have a record high number of homicides in 2018, the population of the city and the GTA overall has also grown rapidly since the previous record was set in 1991.

Accounting for population, the city has had a homicide rate of approximately 3.5 per 100,000 in 2018 — a number which does not account for the frequent movement of people into Toronto from the GTA on a daily basis.

Wortley said it does appear some of the spike in homicides this year are the result of gang-related activity, as well as neigbourhood conflicts that may be intensified through social media. Gang violence seems to have a “cyclical quality,” he said, but without knowing what’s causing the increase, it’s hard to predict whether it will relent.

One potential short-term cause for the increase may stem from the legalization of marijuana, he said, though it remains to be seen to what extent the violence reflects gangs trying to reposition themselves in a shrinking drug market, and trying to move into meth, opioids or cocaine, or into other crimes such as robberies.

However, a longer-term area of concern lies in “disturbing social patterns” that have emerged in Toronto in part due to affordability, he said.

There has been a decline in the quality and availability of affordable housing, an entrenchment of very poor areas in the city, increasing barriers to social mobility and a growing divide between rich and poor as well as a shrinking middle class, Wortley said. It is also important to consider the psychological impact of frequent shootings and violence on communities.

“To what extent is social inequality contributing to higher rates of violence?” Wortley said.

And if it continues, will Toronto begin to see more violence stemming from hopelessness and alienation?

Wortley agreed with Saunders on the need for long-term investment into non-policing solutions but noted that some of the most effective interventions — like early childhood programs — take a long time to show results which makes political support difficult to maintain.

“Do we have the patience to continue to fund those programs so that we can see the benefits of that investment?” he said.

With files from Wendy Gillis, Jim Rankin, May Warren and Star Staff